The function of the [G1] Satellite Pyramid is not known and has been debated at length among scholars. The most frequently cited possible functions of the Satellite Pyramid are: a dummy tomb connected with the sed festival,8 burials for the king's ka,9 symbolic burials for the king as the King of Upper and Lower Egypt, 10 burials of placentas, 11 tombs for the viscera, 12 solar symbols, 13 temporary storage for the body, 14 and tombs for crowns. 15


Your certainty is unfounded and not shared by Egyptology at large. Forgive me if I go with Hawass on this one.

Hawass, for example of one such possibility, suggests its function was related to the sed festival:

The southern tomb of the Pyramid Complex of Djoser is a prototype of the Old Kingdom Satellite Pyramids. The reliefs on the panels in Djoser's southern tomb represent the king wearing the white CroWDand running holding the flail. These scenes in the southern tomb can be interpreted as representations of the sed festival. 16
107
Therefore I propose a new theory on the function of the Satellite Pyramid: that it was used
as a changing room for the ritual of the sed festivaI.


I would also note G1-d has a "T" shaped substructure reminiscent of what is seen at Abu Roash.

As much as GI-a, b, and c are alike, the recently discovered GI-d is clearly different....

While the general belief among Egyptologists is that GI-d was a planned part of Khufu's Mortuary Complex and possibly served as his ritual pyramid, the facts argue against this belief. Its size at only 10% the volume of the other subsidiary pyramids and its "T" shaped substructure clearly sets GI-d apart from the other three subsidiaries but bears a strong resemblance in size and internal layout to GII-a, the minor pyramid to the south of Khafre's pyramid...

It is very unlikely GI-d was built first [before the enclosure wall and associated mastabas] and defined the locations for the outer enclosure wall and mastabas. It is much more likely the boundaries were there first and defined the space and size of a pyrmaid built after all were in place. This sets the earliest possible construction date for G1-d to after completion of the southern mastabas. The timing makes GI-d and Khafre's subsidiary pyramid (GII-a) contemporary and explains the similarities between the two pyramids.

According to Funerary Boats and the and Boat Pits of the Old Kingdom, Hartwig Altenmuller:

The meaning of the boat graves of the Old Kingdom is still disputed. The different theories are succinctly presented by M.Verner in his article on the funerary boats of Neferirkara and Neferefra. The views differ depending on whether the ships are seen as "Solar Barques", as boats for use in the Other World, as transport ships for use during the king's funeral, or as state barques during the king's reign....

The main theory put forward by S. Hassan expresses that the ships buried by the pyramid are "Solar Barques". His comments however were not very convincing. Therefore his view did not find general acceptance.


This concept of the "Solar Barque" does not definitively appear until the MK/NK with the Coffin Texts and Book of the Dead regardless. But please quote passages from the PT.

Which I also say:

As I have noted before regarding boat pits in general, this practice was seemingly abandoned after the 2nd Dynasty in which for reasons unknown, if they are even related, Djedefre revived the practice.


> Altenmuller explains the rhyme and reason for four
> of the boats in some detail.

Interesting you would quote Altenmuller yet still say what you do above which he clearly contradicts.
The point was not the rhyme or reason for their relationship with each other, but rather their placement within the G1 complex.

But to your point, he suggests in his theory that 2 are needed for day and night north to south and 2 for day and night from east to west. When we look at G1, for example, we have 2 boats located side by side on the south side and 2 on the east side. He says these boats would be east/west and north/south of each other, but not the pyramid itself. Compare to G2: 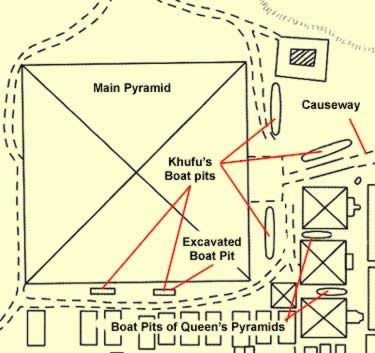 Two completely different layouts in which the 4 of G2 neatly run parallel to the mortuary temple yet for G1 not only do they run instead perpendicular to the mortuary temple, but only 2 will fit and the other two had to be set on the south side. Almost as if they did this because they had no room because the queen's pyramids were already there leaving no room.

Which brings up another problem-the east boat pits of G1 are oriented north south and the south east west. Seems reasonable I guess to point your ships in the direction you are heading-which begs the question each of these boat pits were made to point the ship. G2 on the other hand all are pointing east/west. How'd that be if one's goal is to have to boats going in each of the cardinal direction day and night when they are all pointing in the same direction...?
Just a thought.

> Menkaure´s boats are either not yet found,

Interestingly, in contrast to Khufu's and Khafre's pyramids, there have been no boat pits discovered in relationship to Menkaure's pyramid, despite intensive investigation by an Egyptian archaeologist named Abdel Aziz Saleh, who obviously thought that they should exist.

> or his
> burial goods contained models of the boats.

He's the pharaoh. Highly unlikely he would have wooden models like his mostly non-elite subordinates let alone go through the expense of building a pyramid complex and not make the prerequisite boat pits, one of the easier tasks all things considered, let alone not have them be part of the original plan. And has there ever been a royal wooden model boat found that depicts his journey in the afterlife instead of the mundane daily life depictions found in all the rest? And I would also note that even then such models were relatively rare among the elite until the 6th Dynasty when they became common place.