Which is no news to me. You’re always the last to know.

> > Just because this is your last resort, doesn’t
> > oblige me to dance to your tune. Burden is on you
> > (as it has been all along) to show that there is
> > anything wrong with the numerals.
>
> Mr Stower - we know you well enough on this Board
> to know that if you COULD present such an ordinal
> number on its side (that is NOT a day of the
> month) as evidence in support of your claim, you
> WOULD present it. Of that there is little doubt.
> That you DON'T present such evidence speaks
> volumes.

I did produce such evidence. I met your stated requirement—here:

Now let’s look into the fallacy you’re trying to bamboozle us with. What I can produce now, this minute, is no guide to the evidence which exists (as if I had a comprehensive database and could conjure up “numerals, rotated” to order). We know from Gardiner that there is relevant material and following up his citations would be the first step. Why don’t you take it? Or are you claiming to have done so? In which case why ask me? A mere rhetorical ploy, devoid of candour.

And the evidence which exists is a few chance survivals of what once existed.

And when evidence is produced, you exclude it by arbitrary stipulation.

The main identifiable fallacy employed here is “negation as failure”. A similar thing is passing off absence of evidence as evidence of absence.

> > That rotated numerals are normal has been
> > established.
>
> It has been established ONLY as normal for days of
> the month . . .

No, it’s been established for ordinals in general. Did you not read the Gardiner? Or are you claiming to “know better”? 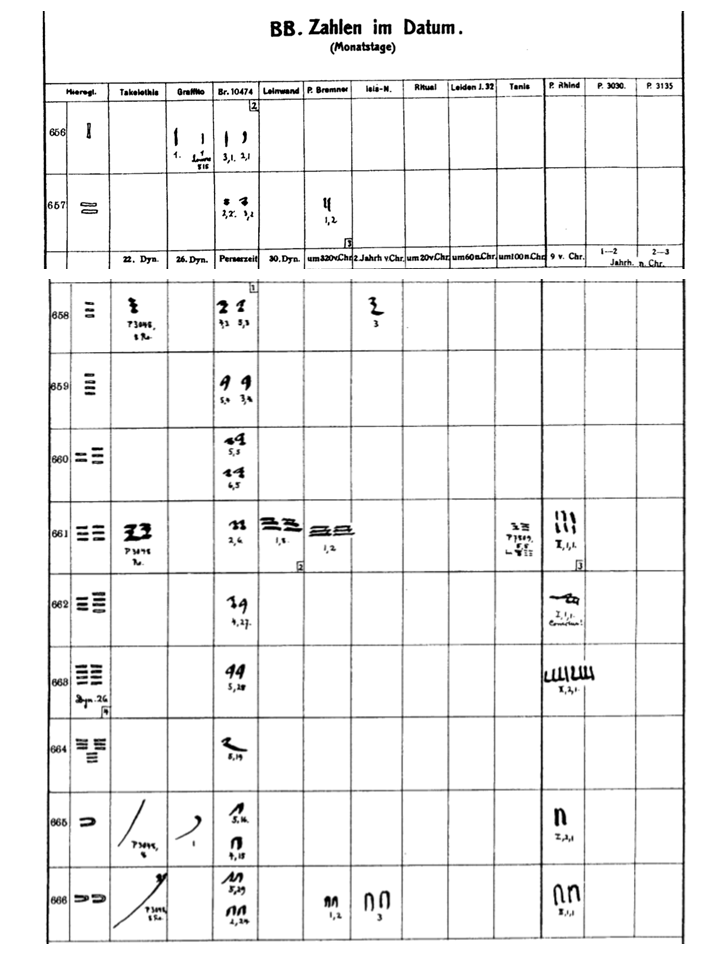 A table of numbers in dates proves what about numbers not in dates? Perhaps you meant to suggest that the absence of

elsewhere is indicative—but that would merely be negation as failure again. Möller does not trump Gardiner. Gardiner goes further.

You serious? It means what it usually means: nothing special, nothing exotic. Would a dictionary help?

> Hence why I have asked for you (or anyone else) to
> present such an example (that is NOT a day of the
> month).

I’ve seen it already. See above for rebuttal.

> You cannot present the disputed numbers from these
> chambers as examples of your argument. . . .

Yes, I can. It’s you who’s disputing them, not me and not the world in general. You can not exclude them by arbitrary stipulation, in advance of making a case for doing so. That is smoke and mirrors. I included them deliberately, to make precisely this point.

The burden is entirely on you to show that there is anything wrong with these numerals. You have not done so.

Now what exactly does Möller have to do with the extended Gardiner numbering? Other than his recognising

as a variant which a literate ancient Egyptian would recognise?

No, they’re not. You’re excluding evidence left and right, entirely arbitrarily. The same old fallacy, one of your favourites: jumping from description to prescription—from following the evidence to laying down the law for the evidence.

This because the light at the end of your tunnel is never anything other than “forgery”. So abortively malformed is your thinking that a convoluted scenario of 19th-century forgery figures for you as the simple theory.

Now, running ahead again, where is Vyse supposed to have seen dates written in old hieratic? The table you reproduce provides no encouragement on the point. Did you not notice? Is this another outing for that most convenient of dei ex machina, the Secret Cache? Curious minds wish to know.