Mysteries :  The Official GrahamHancock.com forums
For serious discussion of the controversies, approaches and enigmas surrounding the origins and development of the human species and of human civilization. (NB: for more ‘out there’ posts we point you in the direction of the ‘Paranormal & Supernatural’ Message Board).
Welcome! Log In• Register
Go to: Forum Home•Board•New Topic•Search
Re: Pi vs Pudding
Author: Sirfiroth ()
Date: January 05, 2020 08:11PM
Hi Jim,
I am currently setting up a woodworking shop and I don't have a great deal of time to devote to these message boards so I will be brief.
I am currently working on a paper that will clarify my position on these matters. Titled: "Architectural Details of Great Pyramid Confirm the Exact length of Petrie's Original Cubit", and hope to publish sometime in March of this year. Establishing the exact length of the Royal Egyptian Cubit as measured in inches with supporting Ancient Egyptian recovered artifacts and archaeological evidence. For me it put G1 in proper mathematical perspective and provided answers for most of the questions regarding the intent of the Ancient Egyptians in designing G1, G2 and G3. It demonstrates their degree of proficiency in mathematics and construction and demonstrates what the Ancient Egyptians were able to achieve using a binary system of multiplication and division cubits, fractions, unit fractions and seked all supported by existing (but long ignored by both mainstream and alternative researchers) physical evidence. Somethings we may have missed mathematically include: In their world all quantities were defined as unity, 1 or 440/440, 64/64, 28/28, 7/7 etc, or simply n/n: All unity units were multiplied or divided by Egyptian multiplication an inverse operation to the Egyptian division operation, and the inverse. The binary addition series known as the Eye of Horus based on the powers of two: (1/2, 1/4, 1/8, 1/16, 1/32, 1/64) equaling 63/64 in which 1/64 in the Old Kingdom was purposely discarded to create an infinite series using rational numbers. As with the inter-related ratios for the seked of G1,2 and 3 also find many n/n-1 or 16/15, 22/21, 56/55, 176/175, 441/440 as numbers between the exterior cubits and the seked ratios of the pyramids.

G2, derived from the 3,4,5 triangle considered less important than G1 also has a message describing the anatomy of the cubits various subdivisions and known Ancient Egyptian units of measure. 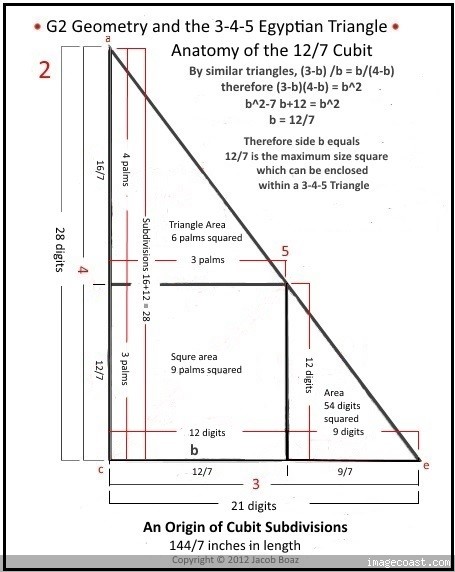 Hendrick quoted from 'The Riddle of the Pyramids' by Dr. Kurt Mendelssohn's: "A scientific theory has to be judged by its credibility, which depends on the supporting evidence. Its value increases with the volume of such evidence…” This is something I consider to be an absolute requirement in any research.

Once understood it is a given the Ancient Egyptians, mathematically speaking, were masters at making the complicated simple.