>
> you must have overlooked my moniker and also the
> part of my explanation to you, where I wrote:
>
>

The 14 pieces of the body of Osiris sound
> like the 14 days of the waning, or "dying" moon,
> and on the main ceiling of the Dendera temple are
> inscriptions and pictorial reliefs that leave no
> doubt. In one panel, an eye, installed in a disk,
> is transported in a boat. The eye, we know, was
> a symbol of the sun or moon. Thoth, the
> ibis-headed scribe god of wisdom and knowledge,
> pilots the barge. Thoth was closely associated
> with the moon and counted the days and seasons.
> The text for this panel refers to the period after
> full moon, and 14 gods accompany the eye in the
> disk.

>
> Thanks for the tutelage, as suggested by your
> response; perhaps you could enlighten Sam in
> respect of the clear distinction between the
> statement that "Osiris is the moon"
> and the Nile waters being the "Effusions of
> Osiris" as he appears to think I am claiming that
> the two are "identical"; I think he is more
> in need than I of your wisdom.
>
> :)
>
> ETA to correct my quote functions and bold for
> emphasis

To be honest, Matt, I think my own views of AE cosmogony/cosmology probably differs from both you and CK. Indeed, I doubt, in fact, there is anyone on the planet who can absolutely nail the meaning of the AE's religious beliefs. In their translations of AE texts, Egyptologists can only ever get a general sense of their meaning and will often miss subtle but potentially important nuances. My own research is primarily focused on finding a possible root source (i.e. real world events) that may have given rise to some of their beliefs. I do this because with most religions it is often the case that they began with some actual event having occurred.

I totally get why CK says Egyptology is wrong. As you know, I think they are mostly wrong too, most especially with their stubborn and dogmatic attachment to the tomb theory. Certainly they understand certain things but I think they have failed to make certain connections from the 'body of evidence' that would have allowed them to see another quite different picture; evidence that would have enabled them to see beyond a 'sarcophagus' so to speak. So, in that sense, I agree with CK.

In the original creation myth it stands to reason that, if everything in creation came forth from the Primeval Mound, then so too would the sun, the moon, the stars, the seas, the animals and plants and yes - the life giving Nile. If we consider then that the pyramids came to be regarded in a similar manner then everything in creation came forth from the Pyramids i.e. from the 'body of Osiris' - it ALL came from Osiris. Including the Nile. This is why, imo, in the Shabaka Stone we can read that Osiris drowned in his own waters - since everything came from Osiris. His body, the pyramids, drowned in the Duat.

The Great Throne (Memphis) that gives joy to the heart of the gods in the House of Ptah is the granary of Tenen, the mistress of all life, through which the sustenance of the Two Lands is provided, (62)owing to the fact that Osiris was drowned in his water. Isis and Nephthys looked out, beheld him, and attended to him. Horus quickly commanded Isis and Nephthys to grasp Osiris and prevent his drowning. (63) They heeded in time and brought him to land. - from here. 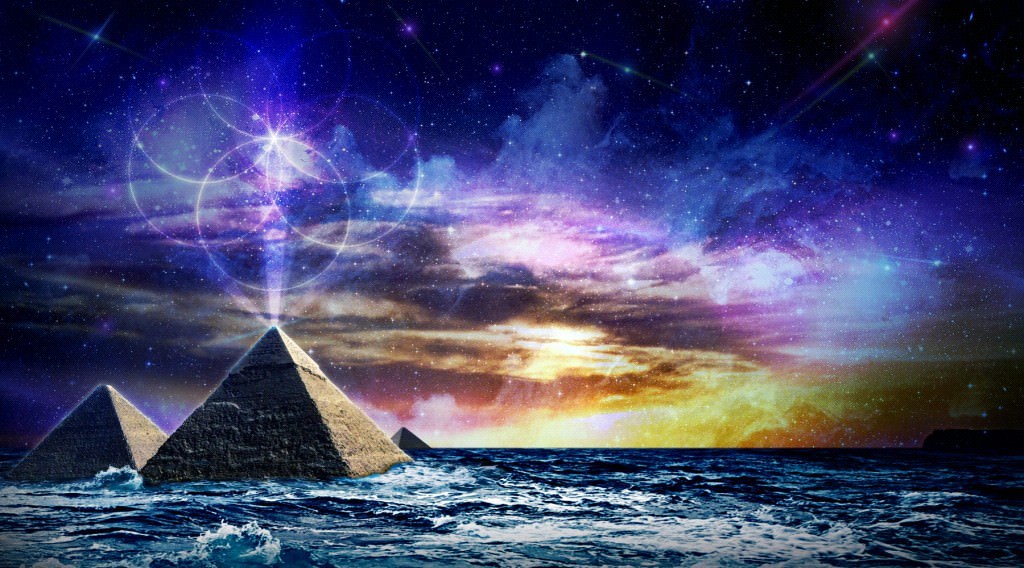 The 'pyramid body' of Osiris emerges from the Duat

And so - if we consider the first pyramids as the symbolic 'body of Osiris' then each day we are presented with this union between Osiris (his pyramid body) and Re (the sun god) thus:

The "mystical union" of the (pyramid body of) Osiris and the sun god, Re.

My twopenceworth - for what it's worth.