Mysteries :  The Official GrahamHancock.com forums
For serious discussion of the controversies, approaches and enigmas surrounding the origins and development of the human species and of human civilization. (NB: for more ‘out there’ posts we point you in the direction of the ‘Paranormal & Supernatural’ Message Board).
Welcome! Log In• Register
Go to: Forum Home•Board•New Topic•Search
Re: Plausible (?) functions of the great pyramid
Author: eyeofhorus33 ()
Date: January 11, 2018 06:36PM
Scott

I suppose what you are implying by asking me to "Read my reply PROPERLY" is to accept your lousy and flimsy explanation.

This is because it is obvious to anyone who reads the myth detailing the death of Osiris that it is an allegorical explanation of the lunar cycle.

Let me explain the significance of there being "fourteen" scattered body parts of Osiris (not sixteen):

According to Plutarch, Osiris was slain-suffocated in the box-on the seventeenth day of the month of Athyr, when the sun was in Scorpius, in the twenty-eighth year of his reign.

The numbers are significant. Although the moon completes its phases in 29½ days, the number 28 was used symbolically for this interval. And an intricate logic links the moon with the Nile through the number 28. At Aswan, the traditional southern limit of Egypt, a nilometer measured the height of the river's maximum rise as 28 cubits. This peak occurred in the autumn, in the month of Athyr, just as the Nile was about to decline. Osiris was slain on the seventeenth day of Athyr. Full moon was counted as the month's fifteenth day, but the moon looks full the day before and the day after. By day 17, it is obvious the moon has started to wane. So, the death of Osiris marked the "death," or fall, of the Nile from its annual flood height and coincided with the day of the moon's monthly "death." Osiris, the god of the Nile and Egypt's life, was a moon god because the river, the land, and the moon wax and wane, cycle after cycle.

Other lunar symbolism also threads through the Osiris myth. His casket floated downstream, out of the Nile, into the Mediterranean. Isis followed it, found his body at Byblos, in Syria, and carried it back to Egypt. Although unable to revive him, she managed through magic to conceive a child by him. She hid his body in the thickets of the Delta marshes and nursed, in secret, the newborn son of Osiris. One night, while hunting by moonlight, Set chanced upon the body of Osiris. He tore it into 14 parts and scattered them up and down the Nile. Once again Isis set out to retrieve the body of her husband, now dismembered and dispersed throughout the land. With patience and perseverance she sought the far-flung parts of Osiris; all but his sexual member were retrieved. The symbol of his vitality remained lost in the Nile.

The 14 pieces of the body of Osiris sound like the 14 days of the waning, or "dying" moon, and on the main ceiling of the Dendera temple are inscriptions and pictorial reliefs that leave no doubt. In one panel, an eye, installed in a disk, is transported in a boat. The eye, we know, was a symbol of the sun or moon. Thoth, the ibis-headed scribe god of wisdom and knowledge, pilots the barge. Thoth was closely associated with the moon and counted the days and seasons. The text for this panel refers to the period after full moon, and 14 gods accompany the eye in the disk.

Next to the portrayal of the waning moon, another carved panel represents the 14 days of the waxing moon. A staircase with 14 steps, a god on each, leads up to the same eye and disk, and hieroglyphics verify the god's association with days of the growing moon. Osiris, it is written, is "luminous," as the god of the moon.

Here is the panel, confirming the meaning and intent of the myth to the Ancient Egyptians themselves (and not to authors of alternative history books in the 21st century): 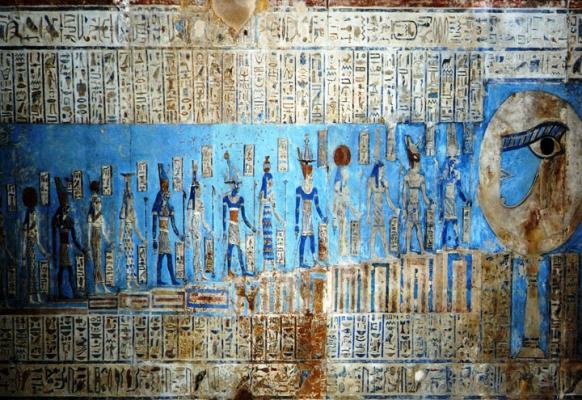 Finally, a third, adjacent panel shows Osiris in a boat with Isis and her sister Nephthys. Goddesses of the four cardinal directions support the sign of heaven, on which the boat floats, and the inscription states for all those who can read it: Osiris is the moon.

And below is the excerpt from Plutarch's "Isis and Osiris" myth, translated by Frank Cole Babbit (245-249)

The Egyptians have a legend that the end of Osiris's life came on the seventeenth of the month, on which day it is quite evident to the eye that the period of the full moon is over. Because of this the Pythagoreans call this day "the Barrier," and utterly abominate this number. For the number seventeen, coming in between the square sixteen and the oblong rectangle eighteen, which, as it happens, are the only plane figures that have their perimeters equal their areas, bars them off from each other and disjoins them, and breaks up the ratio of eight to eight and an eighth by its division into unequal intervals.

Some say that the years of Osiris' life, others that the years of his reign, were twenty-eight; for that is the number of the moon's illuminations, and in that number of days does she complete her cycle. The wood which they cut on the occasions called the "burials of Osiris" they fashion into a crescent-shaped coffer because of the fact that the moon, when it comes near the sun, becomes crescent-shaped and disappears from our sight. The dismemberment of Osiris into fourteen parts they refer allegorically to the days of the waning of that satellite from the time of the full moon to the new moon. And the day on which she becomes visible after escaping the solar rays and passing by the sun they style "Incomplete Good"; for Osiris is beneficent, and his name means many things, but, not least of all, an active and beneficent power, as they put it. The other name of the god, Omphis, Hermaeus says means "benefactor" when interpreted.

The ancient literature cited and depictions of the veneration of Osiris by AE gods as the lunar god, as shown in the image above at Dendera, confirm this.