Mysteries :  The Official GrahamHancock.com forums
For serious discussion of the controversies, approaches and enigmas surrounding the origins and development of the human species and of human civilization. (NB: for more ‘out there’ posts we point you in the direction of the ‘Paranormal & Supernatural’ Message Board).
Welcome! Log In• Register
Go to: Forum Home•Board•New Topic•Search
Re: SC deflection
Author: Scott Creighton ()
Date: January 09, 2018 03:04PM
SC: Suggest you re-read what I wrote.

SH: I have read your article thoroughly a least twice and obviously including some of your sources. Also I briefly read some of the massive load of BS in your argument with Charly.

SC: Charly and I are having a ‘discussion’, not an “argument”. Might do you some good to learn the difference.

SH: Why would I read the trash again?

SC: I cite the Coptic-Egyptian tradition as cited by al-Masoudi.

SH: No you cherry picked a portion without citing the components that completely undermine and destroy your fantasy. It your source was an Arabic restatement of a Coptic history article written in 225AD.

SH: You choose to delude ignorant folks, who seek fantasy entertainment, in the hope of some sort of personal gain. Clearly facts and truth do not matter to you.

SC: You seem very angry, which I find rather odd. I merely present an alternative interpretation of these ancient monuments using the same evidence used by Egyptology and some evidence that is generally ignored by Egyptology. People are perfectly free to do with my interpretation as they please, including you. I do not understand why you are so frustrated by it?

SC: Suggest also that you read where the al-Masoudi Coptic-Egyptian tradition ends.

SH: If you are suggesting that the portion I cited (only a fraction of the stuff that contradicts your case) was not part of the original Coptic document Masoudi replicated. Then you are here deflecting, avoiding it and beingintentionally intellectually dishonest. 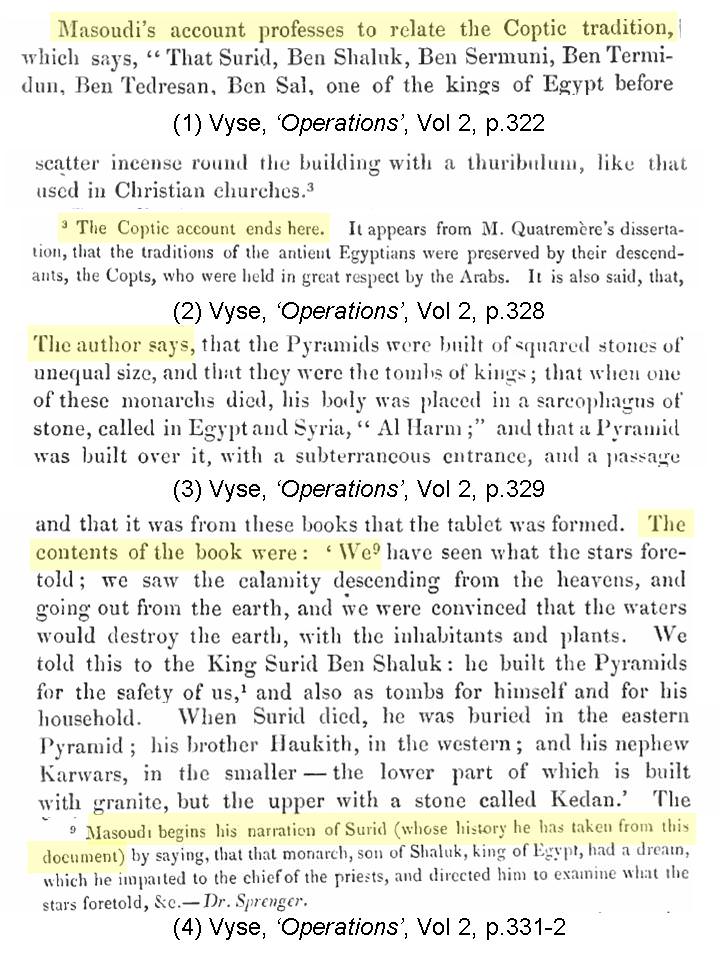 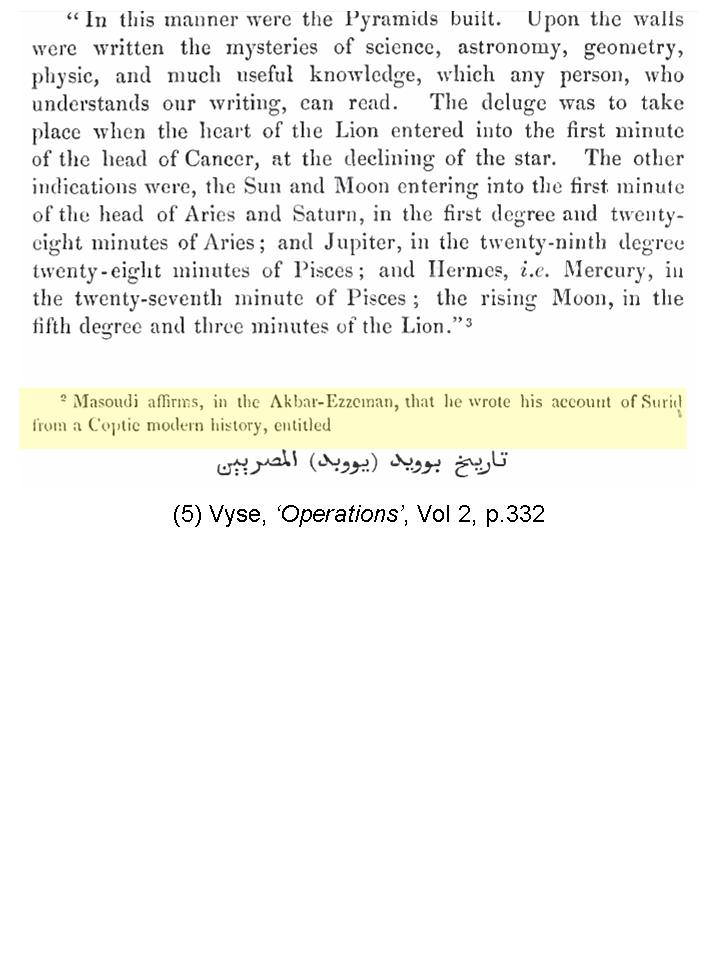 Dr. Sprenger tells us where the Coptic account ends (2). This account he also explains Masoudi took from a Coptic modern history (5). Up to the point where Dr. Sprenger tells us the Coptic account ends (2), there is no mention of the pyramids being tombs for specific AE kings—only that they were ‘Arks’ and also that the bodies of the ancestor kings were placed therein.

Then we are presented with other sources which say Surid and co were buried in the pyramids. These other sources may be Coptic-Egyptian but, from Dr. Sprenger's notes, this is not absolutely clear. So yes--there are other texts that have come down to us that tell us the pyramids were tombs of kings (most notably Herodotus – although Diodorus says the AE kings apparently decided against having themselves buried in the pyramids attributed to them). That some sources tell us the pyramids were tombs is not in doubt. My point here is that this Coptic-Egyptian tradition tells us something quite different. The question is: which one is right?

SH: I posted a copy of your source, so that any interested party who would even consider swallowing your codswallop, can read it and confirm for themselves.

SC: They can see for themselves in the images from Vyse’s book posted above.

[snip]
> Your screaming "fraud" and "Con man" at me gives
> me great heart. For it shows me that I am surely
> doing something right.
>

SH: To be fair, I can sort of understand the "screaming" part.

It was infuriating e.g. :

SC: I hope then you can imagine my frustration having had an entire life of tomb nonsense. At least you have only had a few years of frustration with my opinions. But still—frustrated as I am, I do not consider mainstream Egyptologists are liars or con men simply because I disagree with their opinion. There’s a thing called ‘civil discussion’ which means most adults can have a serious discussion without screaming at each other and throwing their toys out the pram.

SH: -reading you claim to Charly they never were tombs (not possible),

SC: No—I said, (to paraphrase) given the vital role to the kingdom a deceased AE king played in the Afterlife and, for which reason, his body had to be preserved and protected, it would seem rather stupid to place such an important (deceased) king in a (relatively) accessible chamber within the most visible man-made structure on the planet (at that time).

SH: …then insist the very purpose included incorporating the actual bodies of ancestors …

SC: Into an inaccessible chamber, yes. The primary function of the pyramid is still a ‘Recovery Vault’ and, actually, becomes even more so with the bodies of the ancestor kings placed within an inaccessible chamber since, according to AE beliefs, the Kingdom needed the divine benevolence of their deceased kings (gods) to ensure the kingdom would flourish. If they had all been destroyed then this would surely have made any recovery (from the deluge) much more problematic if not impossible. So, you can understand why it would have been vital that they did this.

SC: Surid is an Arabic name which Lehner believes may have been a corruption of Suphis.

SH: One who had dreams, had them interpreted, consulted astrologers, about a flood and the timing given for such "flood" coincides roughly to biblical timeframes and not your fantasy ice age speculation.

SC: Such traditions are often embellished to make the King appear with ‘divine’ or supernatural abilities. It doesn’t change the fact that they state that they anticipated a deluge that would destroy their entire kingdom. The AE Book of Coming Forth by Day (Book of the Dead) speaks also of a flood that would drown the entire kingdom. The Pyramid Texts relate to us the “Night of the Great Flood” that “issued from the Great One”.

SH: - reading your challenge to Charly about the accomplishment of Snefru ( I think there is some genuine grounds for that) but then rely on a spurious folklore fantasy document you deviously call "the Coptic-Egyptian texts" in which the fantasy king Surid

SC: See above. Surid, according to Lehner, may be a corruption of Suphis.

SH: is said to have built all the pyramids in a 65 year time frame! Hypocrite !

SC: Other versions say 61 years. My issue wasn’t with the time it took Sneferu to build his four pyramids but that, if the orthodox theory is to be believed (i.e. he kept building until he had perfected the true pyramid), then after the fault in the Bent had been realised, why continue building that structure far beyond the point of its 'failure'? That tells me that Sneferu was NOT too bothered about perfecting a true pyramid but simply wanted to build as many pyramid recovery-vaults in his lifetime as he possibly could. Sneferu’s building activity also tells us that he was building/converting pyramids in parallel. If Surid did likewise then, if he had ruled for 61 years, it is entirely feasible that all the Gizamids could have been constructed within such a timeframe.

> Your screaming "fraud" and "Con man" at me gives
> me great heart. For it shows me that I am surely
> doing something right.

SH: However this statement ought make it clear to all that you consider it 'a badge of honour' and achievement to be dishonest and deceive! Willing to do or write anything that causes reaction and attention to you and your insane fantasies!

SC: Well, I’m happy they caught your attention. I simply fail to understand why you become so “frustrated” by my interpretations. Frustration is no reason to throw around insults. If I see something different to you and can present some evidence to back up my interpretation, that should not make me a liar, a fraud or a con man. It simply means I see an interpretation that is different to the one you happen to believe. Or are we to all just shut up and accept without question, even when we see the emperor has no clothes? Is that what you would prefer?

SH: You have every right to post your views (perhaps more than I).

SC: Nope. No more than you and no less than you.

SH: However I hope I see the day here where you are reduced to a Cladking like figure of amusement , who finds it necessary to start threads , with although lots of curious humour seeking views but very few replies, and then talk volumes of BS! to yourself!

SC: Now that’s just mean and wholly uncalled for. It’s simple—if you don’t like what I have to say, ignore it.

SH: Thanks for nothin'!

SC: It isn’t “nothing” but you’re welcome anyway.