Mysteries :  The Official GrahamHancock.com forums
For serious discussion of the controversies, approaches and enigmas surrounding the origins and development of the human species and of human civilization. (NB: for more ‘out there’ posts we point you in the direction of the ‘Paranormal & Supernatural’ Message Board).
Welcome! Log In• Register
Go to: Forum Home•Board•New Topic•Search
A bit of sky
Author: drew ()
Date: June 20, 2019 01:41AM 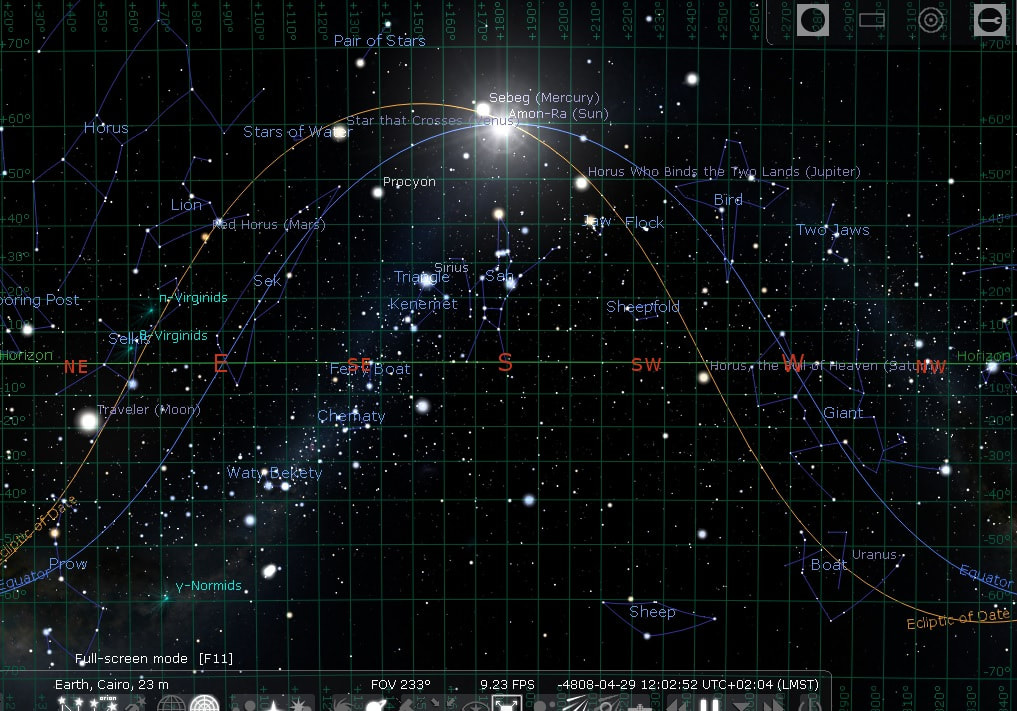 A sample image of Egyptian constellations according to Stellarium, 4808BCE April 29 at midday. Orange line is ecliptic; blue line is celestial equator; horizontal green line is horizon, all viewed from Cairo – for this one anyways. Mintaka is upon the southern meridian at this moment.

In Madeleine’s topic about the three boat pits on the east-side of the pyramid, I posted a similar image in regards to what would have been seen in Khufu’s time when the sun appeared between G1 and G2 toward sunset. This reflected the angle of the middle pit, and again there was midday and Mintaka.

For the above image, it shows the ecliptic and equator aligned with the sun on the winter/spring equinox and I arrived at this date just by scrolling through years until this alignment included Mintaka. Going backwards in time means the equinox shifts to the east along the equator, and west going forward in time. This means the sun travels too, so when it is midday, there will be rotations of the sky in either direction and certain other stars will be crossing the southern meridian.

The midday factor for this image is the uprightness of Orion, the shapes of the ecliptic and equator lines, and which stars are where for both geometrical arrangements and possible legend or symbolic reasons.

This scene can be adjusted to identify any of the belt-stars as being the one crossing the horizon, or any other star that may do so at midday on an equinox or solstice or any particular time. When we identify a particular scene from texts, it is possible to identity some of the characters and the background view and where the sun is so that an astronomical drama is presented. I guess this is pretty much extant around the world with a lot of the sky-tales. No wonder we can have so many gods...and for Ra visiting certain areas to engage with certain gods and creatures when Orion is upright or laying down or in the underworld means particular dramas are happening with particular characters.

Anyways, in regards to what certain hieroglyphs look like and what the entrance feature of the pyramid shows, having the sun at a certain location between a split western mountain may involve a celestial mountain either depicted as the lines of ecliptic and equator – or even the Milky Way as can be seen also – and the sun right between it. Otherwise the sun is within a constellation or between constellations named ‘mountain’, at a certain location which renders the glyph for ‘shining horizon’.

If "s3h" is one of Orion’s belt stars – for this example it is Mintaka – then possibly when it is at its most powerful compared to where the sun is means it aids Ra.

The other boat pits align north and south, paying homage and representing those very real celestial associations. While they would have associations to legend, they also appear in the sky and for this image, ‘ferry boat’ is just reaching the south eastern horizon, so this could very well be Ra’s barque...one of his vehicles...one that Osiris uses...one that Pharaoh uses.

I guess we can take celestial legend as offering celestial mechanics and certain moments in time showing certain things, so trying to work out which these certain things are up there means we translate Pts.

If "s3h" isn’t Mintaka, then its just about rotating things until certain things are above the horizon where one of them is crossing the southern meridian with the sun and while Orion looks just right.


i'm going for a short walk on a long pier. back in a second