I'd say it's at least an inch thick, but no this does not appear to be a working vertical load bearing wheel. Perhaps it is a model of one, the AE were quite fond of making models of things. Its shape reminds me of the model vehicles found in Anatolia arguably dated to 5500BC: 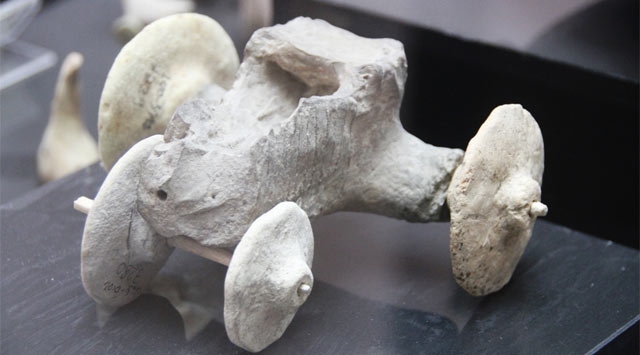 > The center
> hole doesn't appear to go all the way though. The
> lighting in that central depression is shaded to
> imply it's a closed, rounded bottom.

This does appear to be the case. It would be nice to see the other side of this object but I am striking out. This was part of a large burial site in Lahoun.

> Perhaps a serving dish with a center well for a
> sauce, caviar, toothpicks. Maybe a decorative lamp
> (center hole for a candle or oil pool).

I assume you are joking about the serving well, but given its unnecessarily large flange compared to the collar, assuming the hole does not go all the way through and the other side is flat, it seems probable this was base to hold a shaft mounted object.

> It looks similar to the infamous very thin "schist
> bowl",

> but flattened, without the folds or thicker
> perimeter, thicker collar, and a rounded
> depression in the center rather than the hole
> going all the way through.

So other than the collar in the middle and overall circular shape, actually not very "similar" but quite different.

> There are what appears
> to be fragments of thin bowls and pedestals in the
> vicinity.

The "vicinity" is the tomb. 14 of the tombs found dated to the 2nd Dynasty which I cannot find any more information on it other than the initial press release.

Regardless of what it was for it is a wheel shaped object nonetheless.