> this tool seems to have
> disappeared from use for 5-6 centuries,

Can you quote me where I said the tool itself disappeared? What I said was:

What I see is that the representations of the Was Sceptre in later times seem quite distorted from its original intent regardless of whether or not the tool fell out of use at any point in between. Does, say, this look like a surveying tool to you: 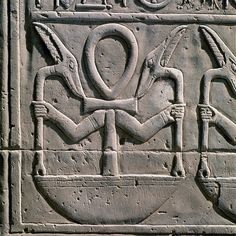 Having any relation to this: It seems quite suggestive that regardless of the continued use of the tool, or not, if it even was a surveying tool as we have no idea, the understanding of the iconography changed dramatically in later times becoming something else entirely. The MK was certainly a "revivalist" period in which much of the older iconography seemed to be reinvigorated and to some degree reinterpreted.

And actually, it's not just that its use from the 3rd Dynasty to MK is sparse, almost non-existent, the same is true before this time with the early Dynastic examples I show some of the only ones found which even then is an assumption on my part that others in fact were found. So to that end, if anything, I would amend my previous statement by saying that it did not in fact go out of disuse in the 3rd Dynasty-MK, but was never prominent to begin with to where by the MK, not only was its original meaning lost, but was reinvented as an integral part of the AE symbolic cannon.

> and base
> this on the amount of available images you've
> seen. Is this correct?

Which is no small thing given what is available to me is not necessarily obtained by most others, but by all means you or anyone else please provide examples otherwise.

> Meanwhile, should we disregard the absolute
> obsession with the sun and stars during this
> 'missing' time frame, in which activities
> themselves would suggest they would have continued
> to employ these tools?

> So they completely forgot
> about this item only to stumble across the same
> applicable use centuries later? Thus, my doubt for
> your suggestion (regardless of how images I can
> summon) comes from ample testimony of explicit sky
> worship throughout.
>
> What are your thoughts?

Among other things at the moment:

1) We have no idea what it originally was. A surveying tool seems practical to me, but I concede it is just a possibility.

2) Its use prior to the MK is unusually sparse compared to the prominence given to it from the MK onward.

3) Its meaning and importance from the MK onward seems clearly at odds with what came before implying it took on a meaning it otherwise did not originally have which suggests to me they were not fully aware and/or warped its original intent.

And as far as your "regardless of how [many] images I can summon", being none, does not mean its lack of use prior to the MK does not require explanation as well as does the starkly different representation, apparently "meaning", of it from before and after this period. I think your logic actually goes a long way to suggesting it was not the tool we both seem to think it was and instead something else entirely-something whose meaning could be forgotten and/or warped from its original intent.