Mysteries :  The Official GrahamHancock.com forums
For serious discussion of the controversies, approaches and enigmas surrounding the origins and development of the human species and of human civilization. (NB: for more ‘out there’ posts we point you in the direction of the ‘Paranormal & Supernatural’ Message Board).
Welcome! Log In• Register
Go to: Forum Home•Board•New Topic•Search
Re: this is at odds with Newearth/Russian scientist findings/conclusions
Author: Tsurugi ()
Date: October 17, 2017 04:55AM
Rstevens, Racho....


I have spent a lot of time on this, haha. So-called "cart-ruts" have been bugging me for years. Below are a few of the things I've noticed....


First off, let's all just look at this for a while. These are on Malta. 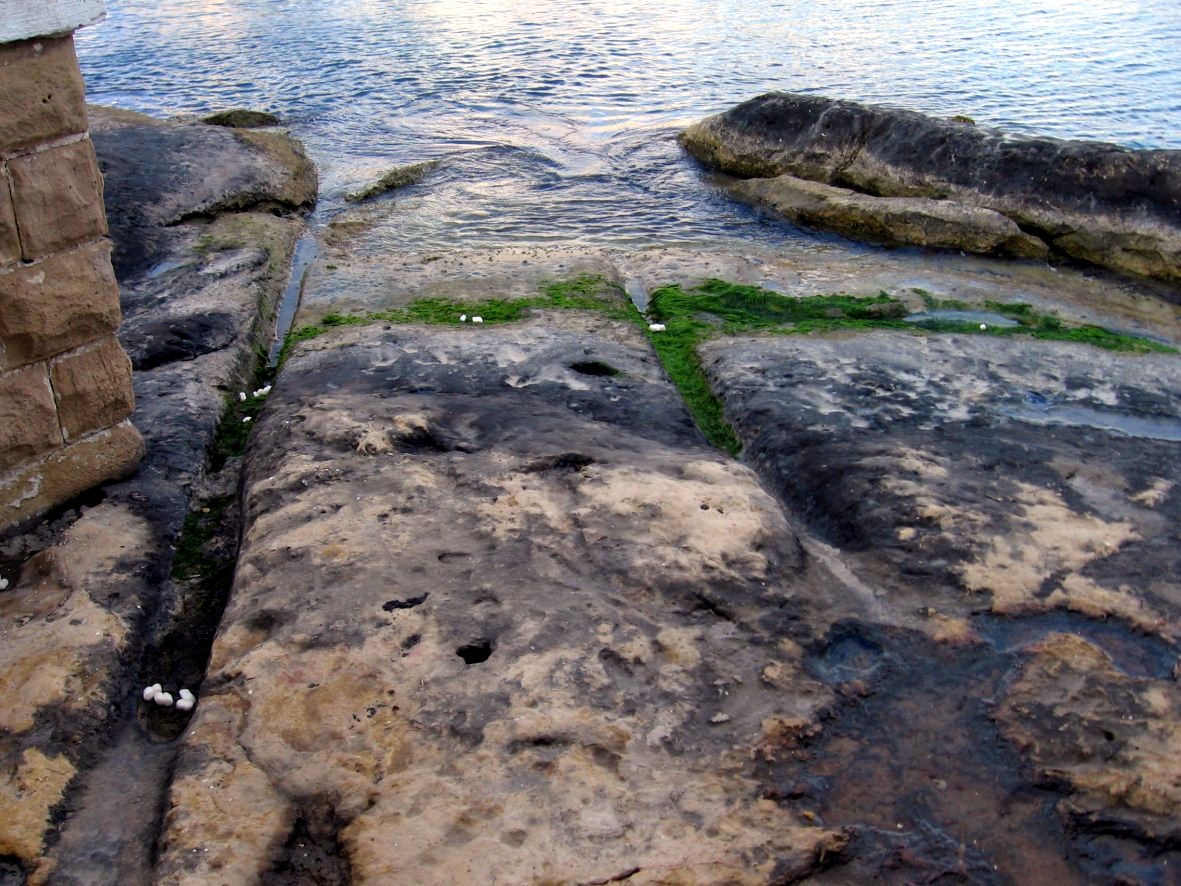 They do continue on out into the bay and go for hundreds of meters. Others have been found underwater that seem to lead to the other islands around Malta.


As for these being cut or carved for some sort of quarrying purpose....well, let's have a look(the following images are from Malta except where specified): 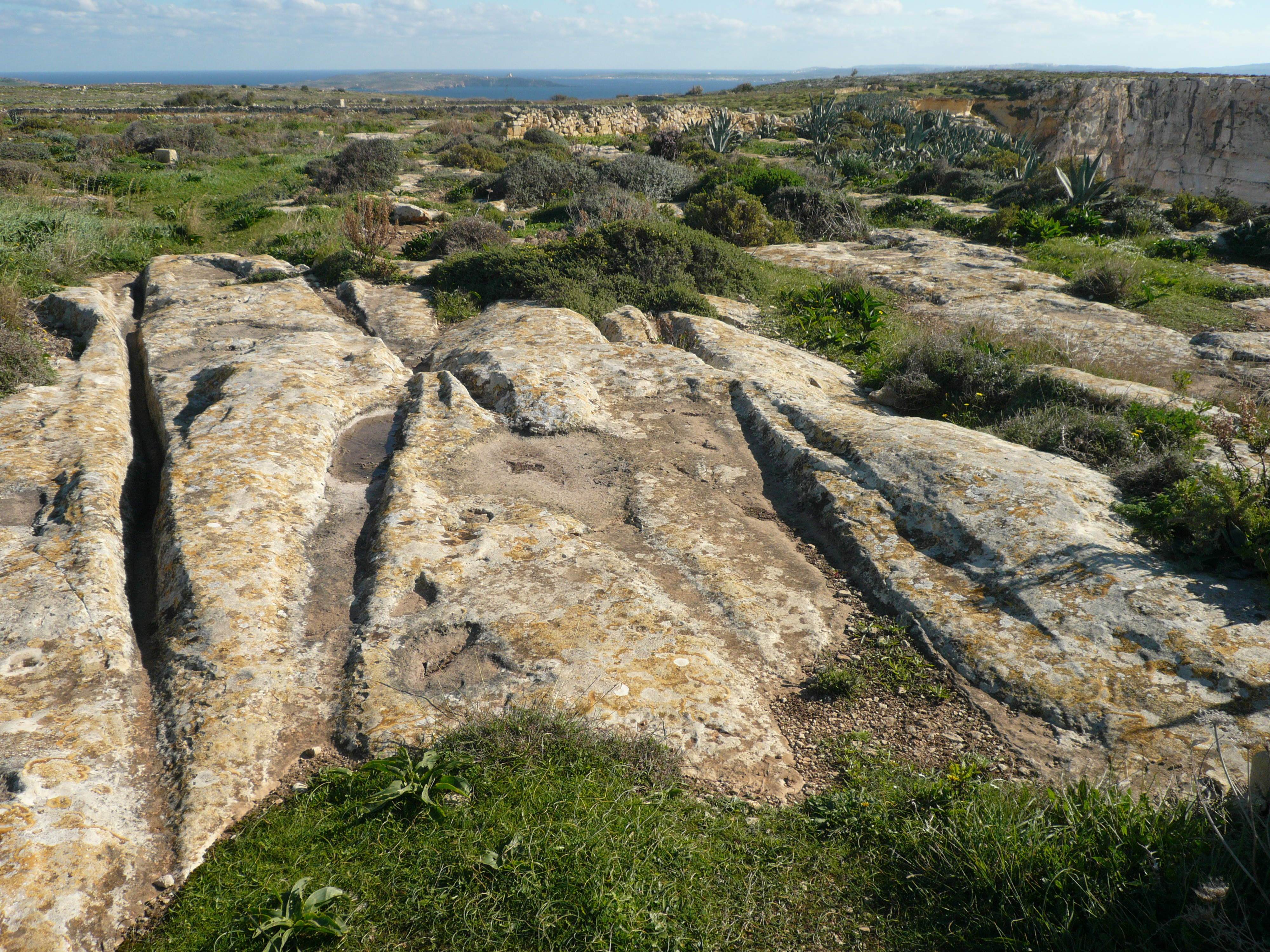 Note the confusion of tracks on the right. A bit haphazard to be constructed tracks, I think... 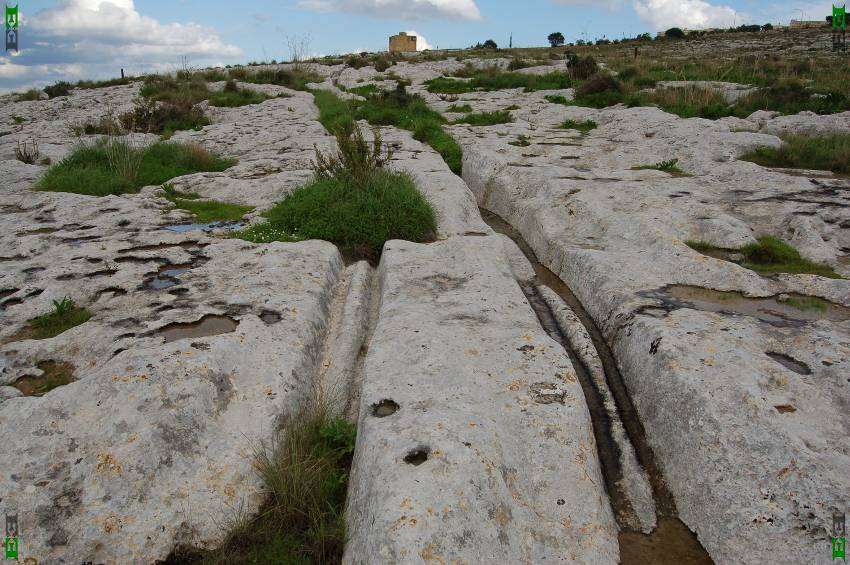 Why the double tracks here? This doubling doesn't last long either, it merges back to single tracks. 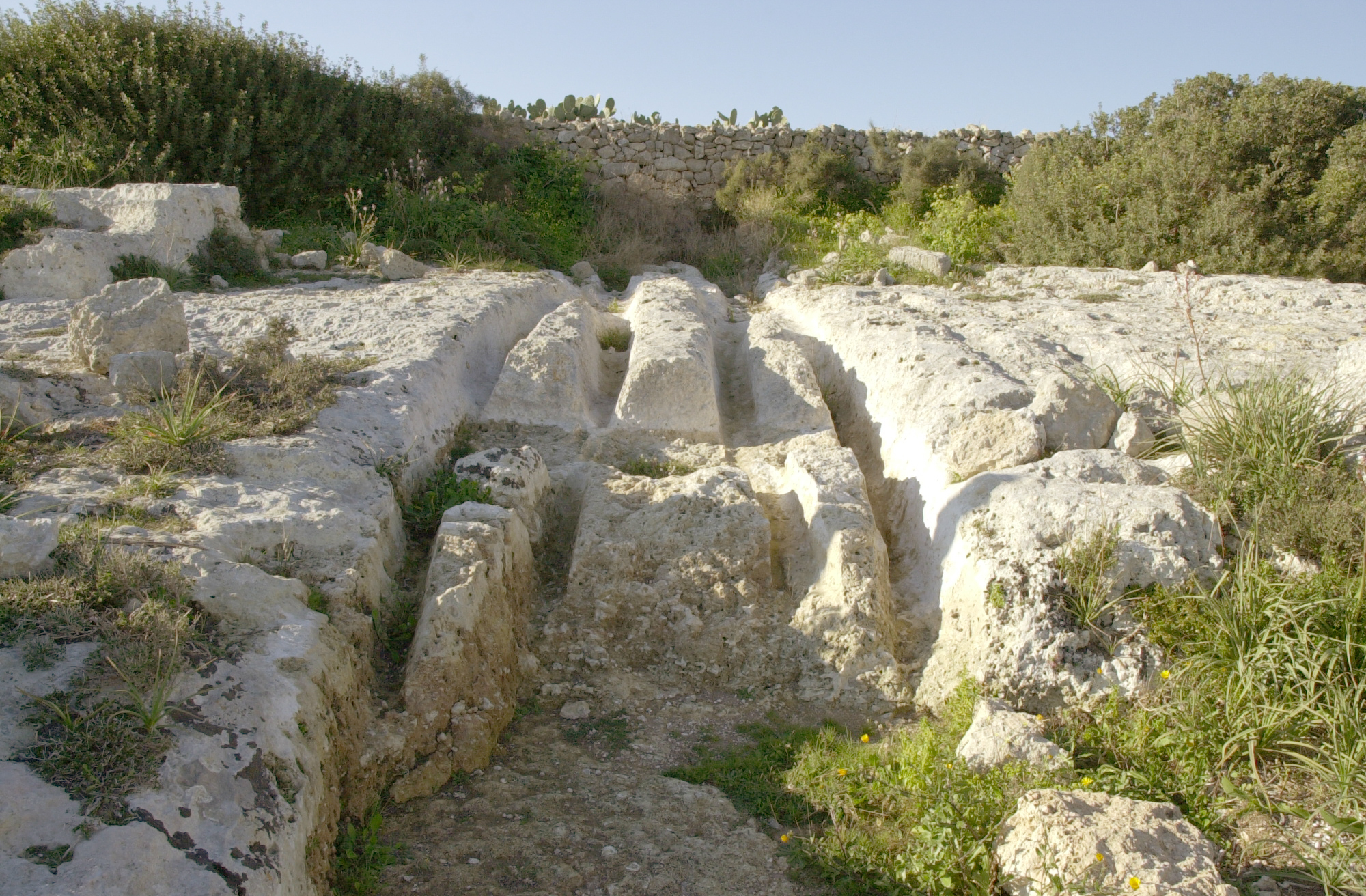 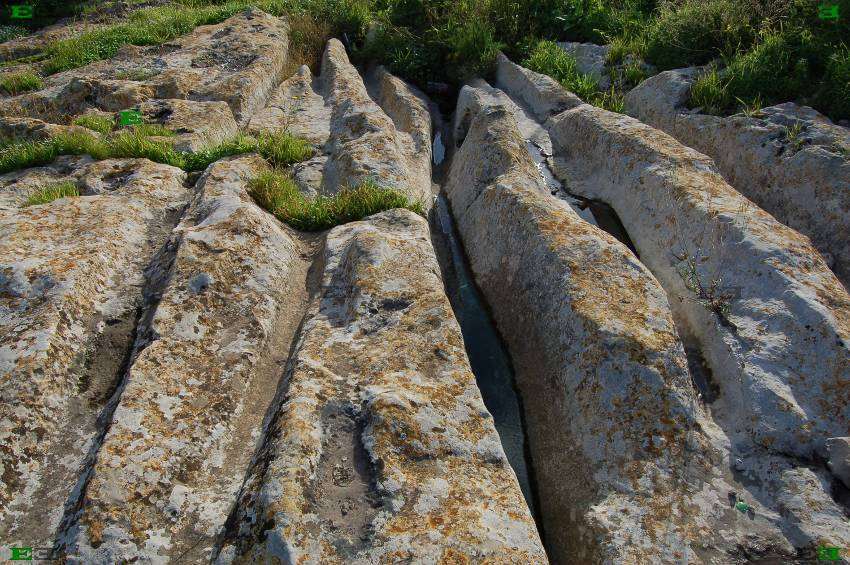 Again, seems too busy/confused to be constructed. 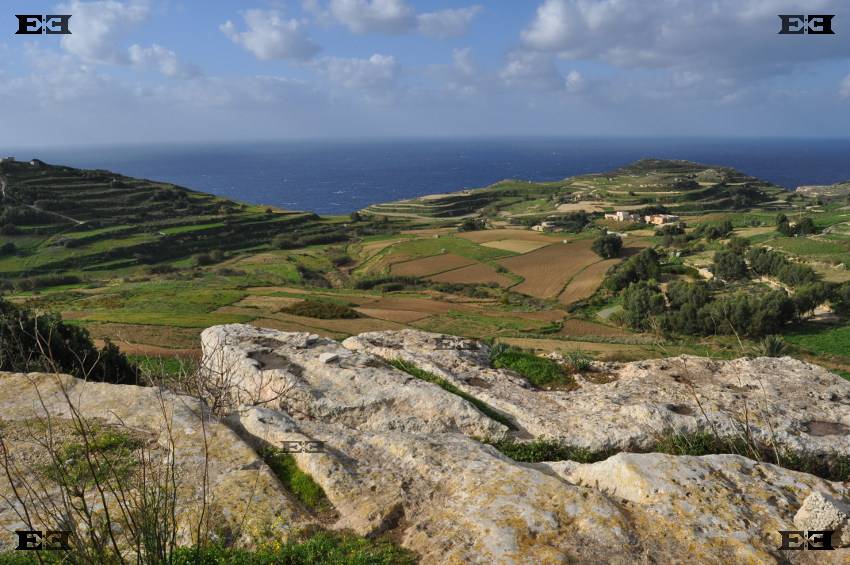 These go right off a cliff.

Next, are these all really made by "carts", i.e. primitive single-axle single-donkey(or horse, or whatever) wooden carts? If so, where are the donkey/horse tracks between the wheel ruts? Whether made a long time ago by a few passes of carts when these surfaces were not yet stone, or made more recently by millions(??) of passes of carts where the wooden wheels somehow dug into the rock....we should see signs of the tracks of the beasts of burden between the ruts. We don't. 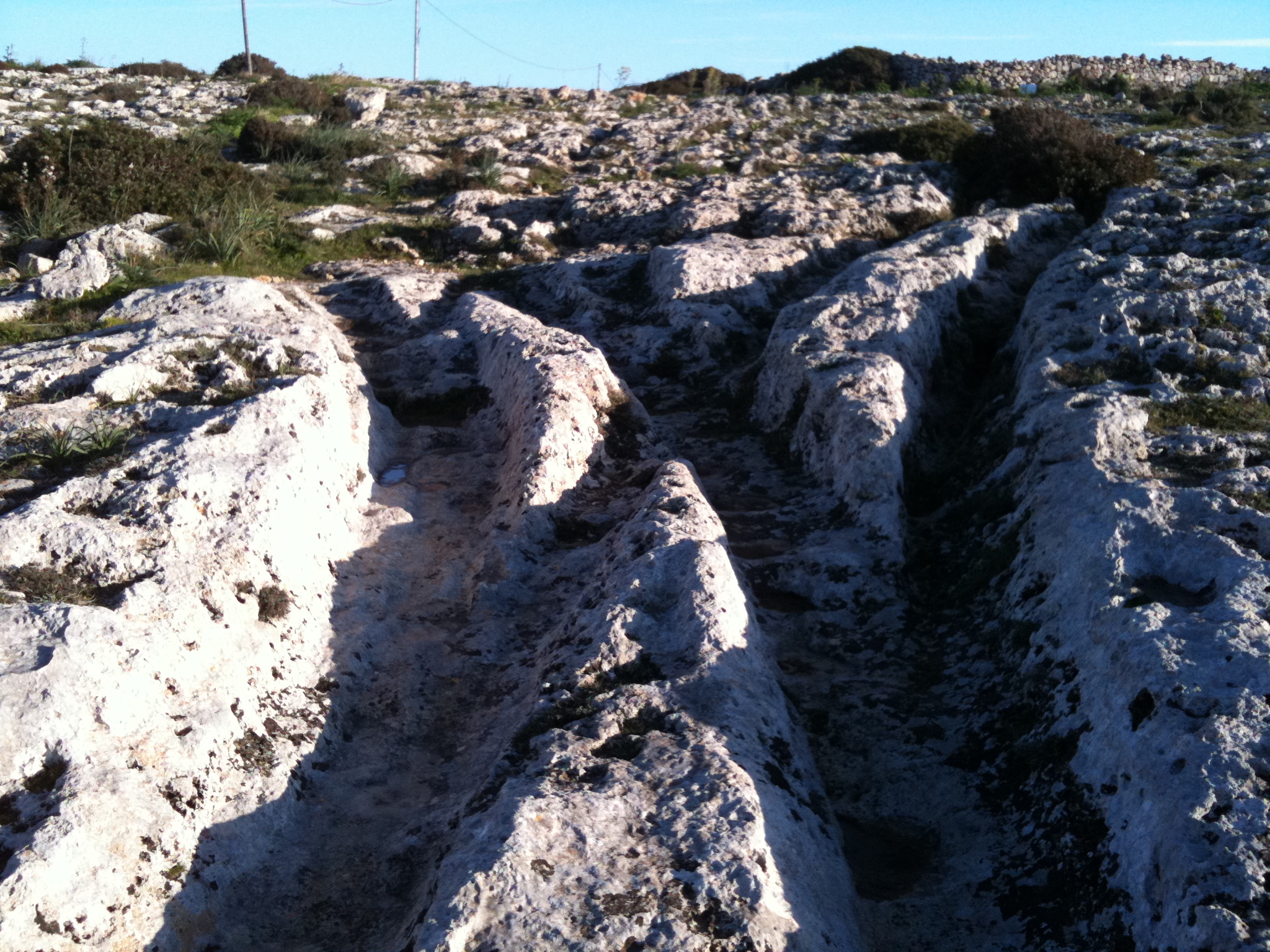 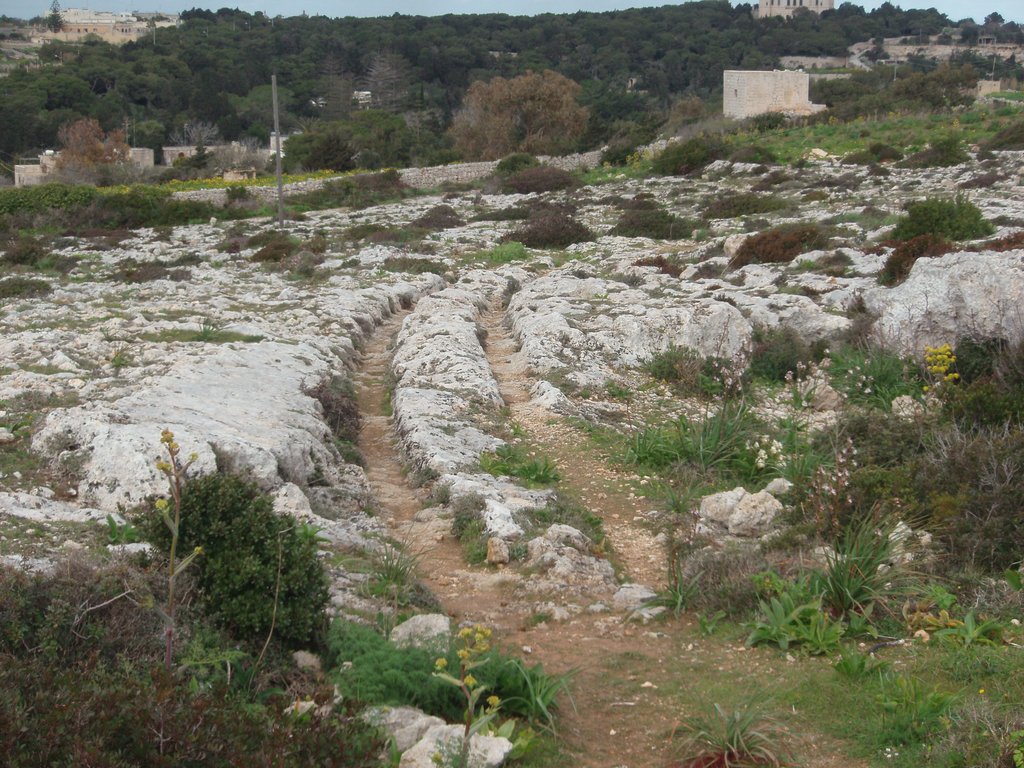 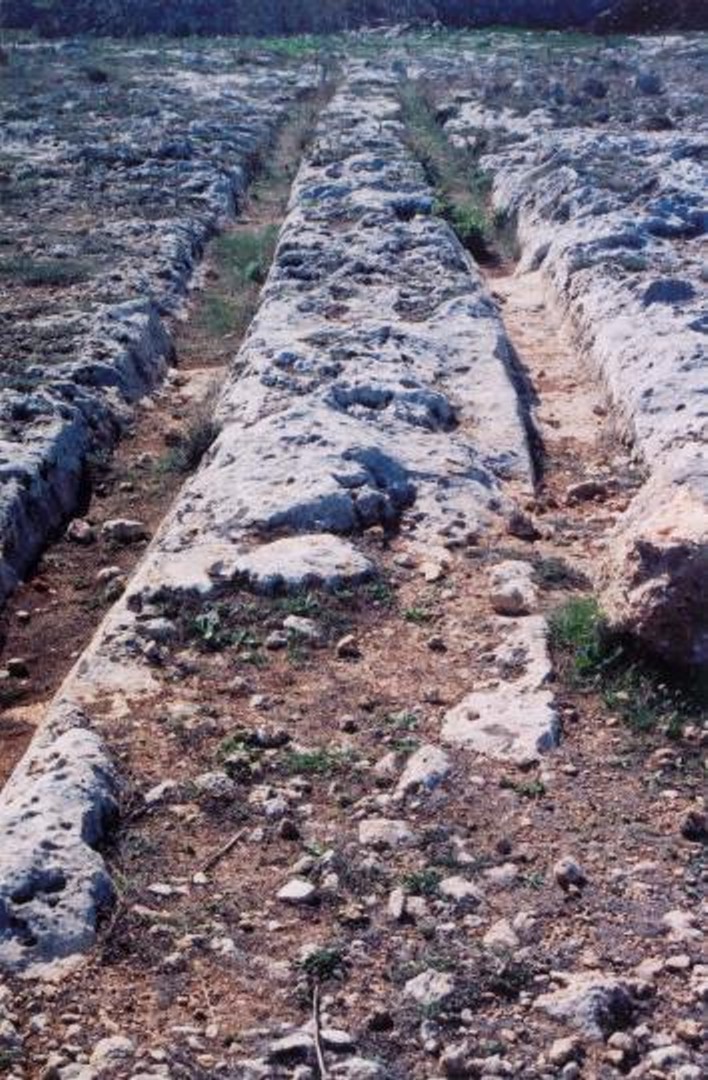 ....which are rather wide-wheeled to be carts. They look a lot like modern SUV tracks actually, with wide all-terrain tires.

There is argument that the limestone of Malta is especially soft, and rain practically turns it back into mud, so these ruts aren't that big of a deal really because they are easily made by multiple passes of primitive wooden carts. Of course this has never been demonstrated, and again there is the problem of the missing animal tracks....but Malta isn't the only place where cart ruts are found. 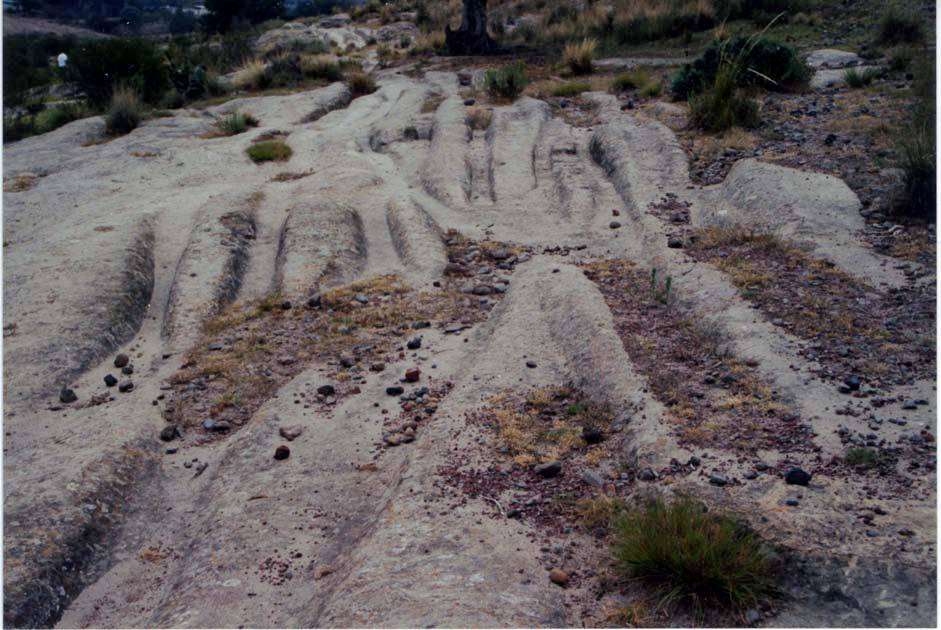 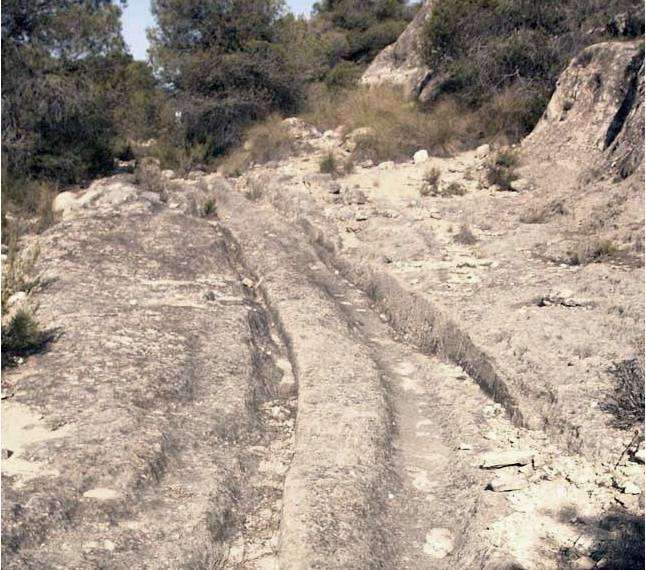 ....and they are not always in limestone: 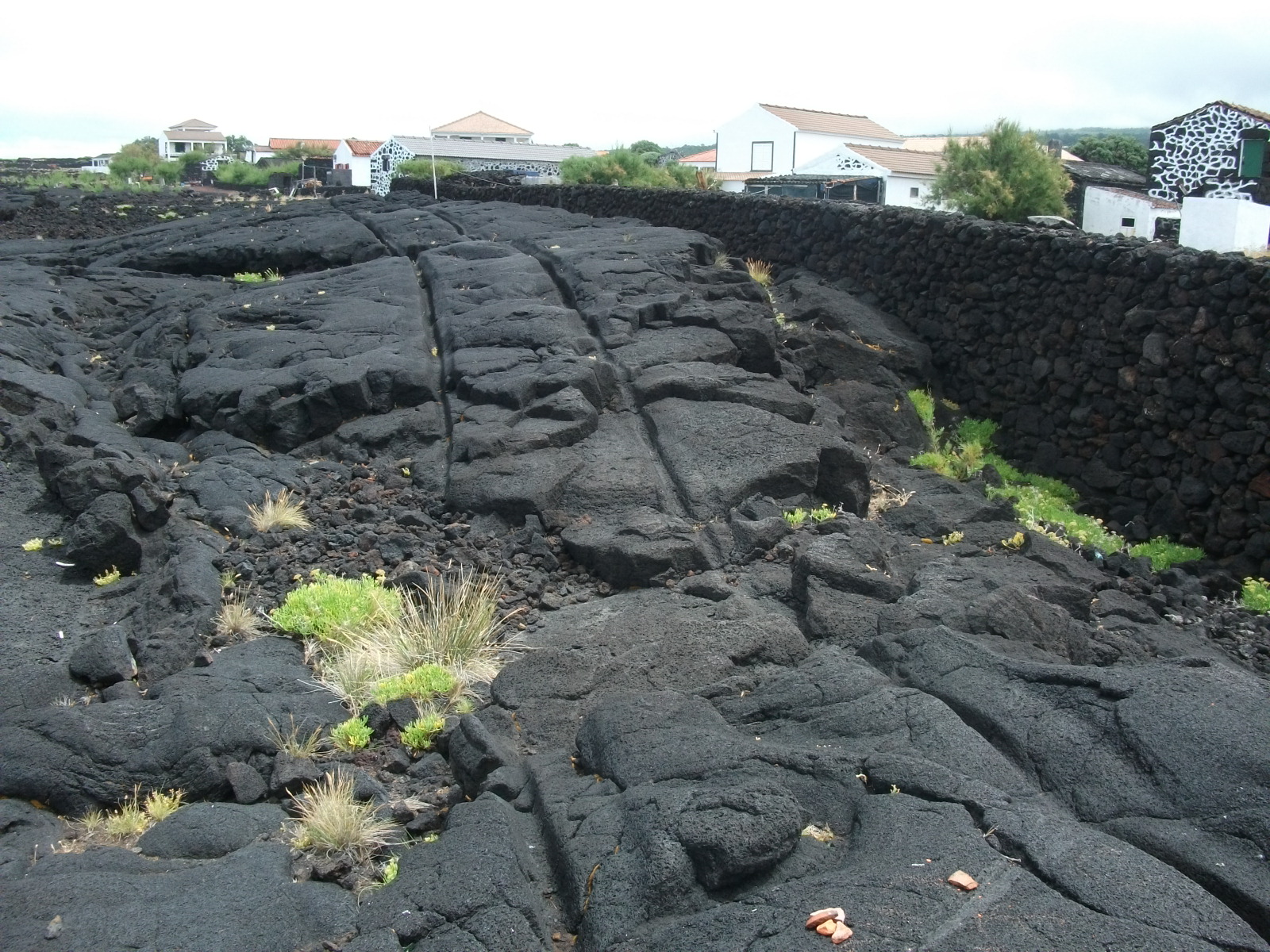 
However, look at this: 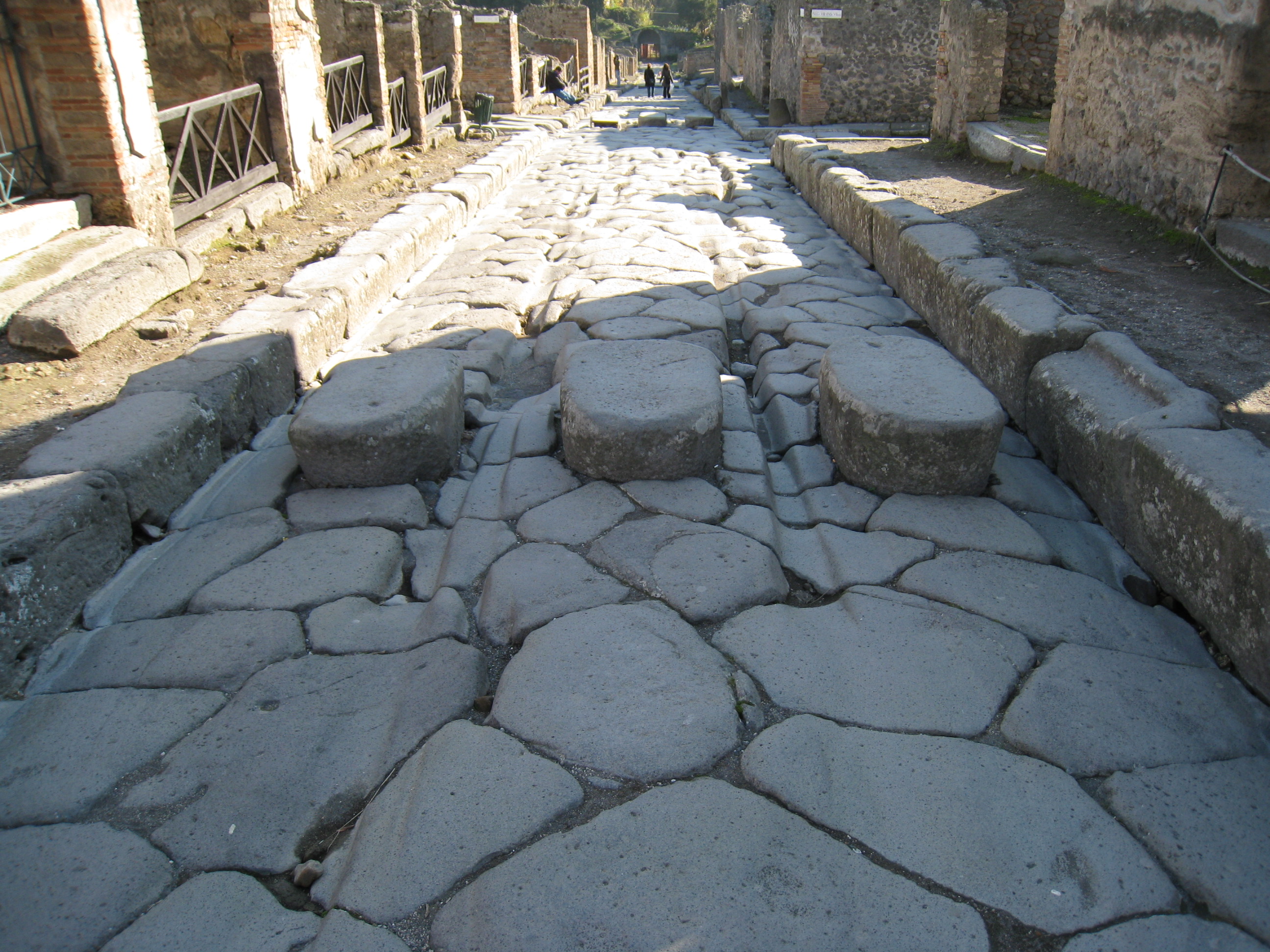 This is Pompeii. Usually labeled as a Roman-style flagstone road with cart-ruts in it. But I'm not sure....look at how the road is sunken in a rock-lined channel, and has raised stepping stones for pedestrian crossing.
This is Pompeii, right? Famous for being covered in 50 meters of solidified pyroclastic material from Vesuvius. I'm thinking this road was actually just dirt--in other words, mud. Thus the channel, to confine the mud to the road; and the stepping stones, to keep peds from having to wade through it. The hot pyroclastic material caused the mud to dry, crack, and petrify...and preserved the ruts. Maybe? 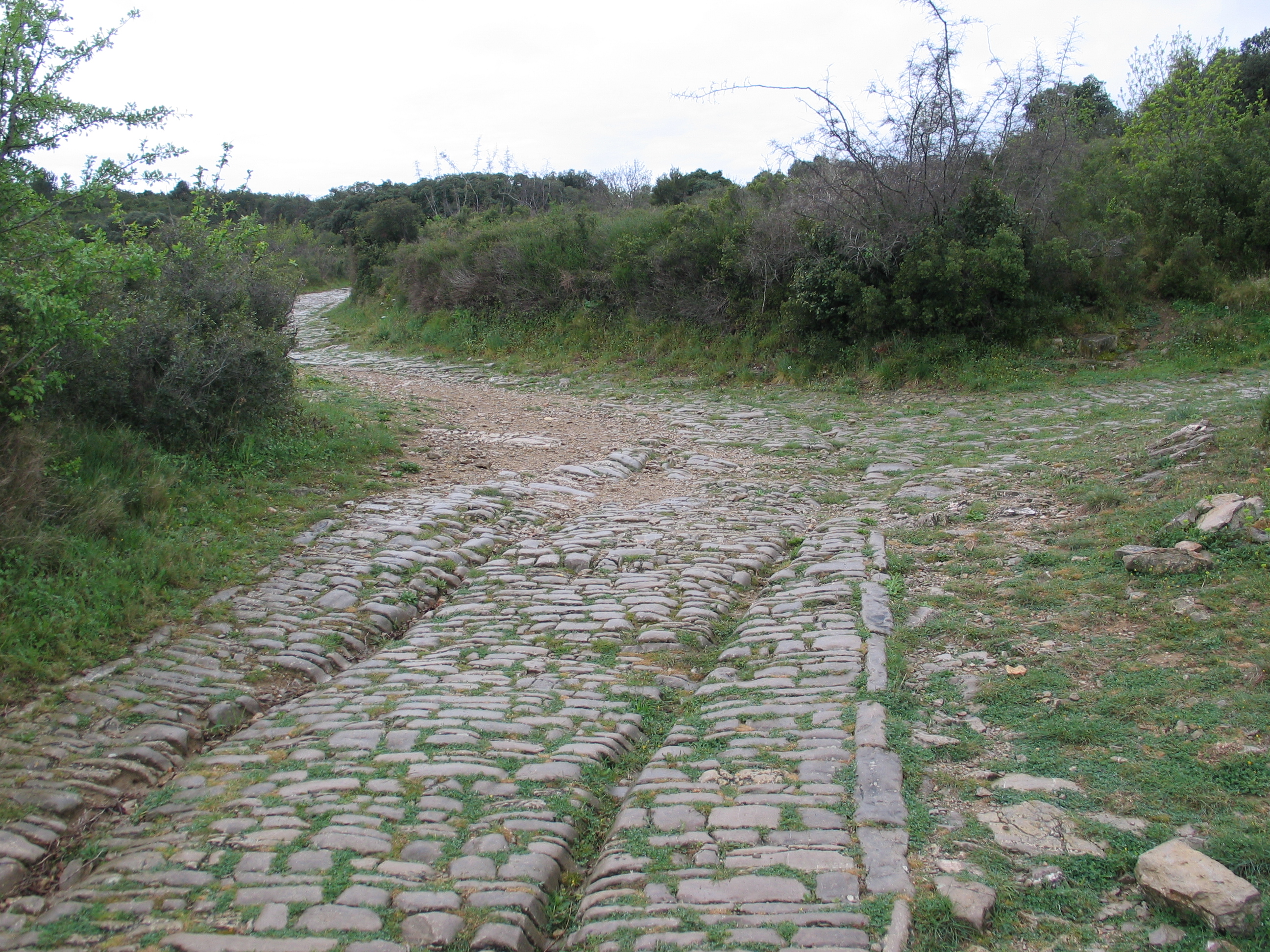