Mysteries :  The Official GrahamHancock.com forums
For serious discussion of the controversies, approaches and enigmas surrounding the origins and development of the human species and of human civilization. (NB: for more ‘out there’ posts we point you in the direction of the ‘Paranormal & Supernatural’ Message Board).
Welcome! Log In• Register
Go to: Forum Home•Board•New Topic•Search
Re: Water marks on King's Chamber shaft opening
Author: Thanos5150 ()
Date: August 15, 2017 08:57PM
Origyptian Wrote:
-------------------------------------------------------
> You raised the issue of what you believe others
> "want to see", but from my perspective it seems to
> me that you are the one who does not
> want to see that stain under the shaft.

Why would someone who has suggested G1 was a water condenser "not want" to see water stains? I do not see them because I do not think this is actually what we are looking at and find the one-off 1910 photo suspect as to what was actually there when the photo was taken.

> And it's
> curious. I mean, it's not like that stain means
> the thing must therefore surely be a nuclear power
> plant, or a granary, or a UFO garage.

If that is where the evidence led I would accept any of these possibilities, but I am not going to shoehorn evidence to salve my confirmation bias. I mean, who wouldn't want G1 to be a UFO garage? According to the OP: "this [the stain] is undeniable proof that the Great Pyramid was not a tomb." By the same token would you not agree that the stain is not "proof" of whether or not it was a tomb? That this is "undeniable proof" of nothing other than stains seen in photographs of which we do not know what made them or when?

> It's just a
> hardened limestone mud stain confirming that the
> structure is very old, has an inclined portal to
> the outside that certainly could have collected
> rain, condensation,etc. that simply could have
> drained downward and carried some of the limestone
> powder dissolved into it.

It is very old-nearly at least 5,000yrs old. Even if these processes began after the Arabs arrived and breached it that is still over 1300yrs. What you are suggesting is logical, though all things considered I think improbable for several reasons and believe there is another explanation regardless. Again, or anyone else for that matter as it is not just the Edgars who do not notice this unusual feature staring them right in the face, but no one ever before this picture was taken and the walls were cleaned of graffiti. Nor anyone after. Sandys, Greaves, Napoleon, Caviglia, Vyse, Petrie, ect, ect all stood right there examining the shaft and wall in detail yet none of them noticed it? Caviglia was the one who tore up the south shaft and excavated the exterior shafts and someone in relatively modern times breached the northern shaft 8ft past the opening from the ante chamber and excavated for a whopping 30ft. If what is seen in this one photo was really there to that extent then is it not possible it is a product of the activities of any number of modern breaches? Hence why it was not worthy of anyone to mention and washed away with the same ease as the chalk grafitti?

A little more than a decade later we have this photo: The above is so washed out it doesn't even pick up the seam yet from another angle it becomes quite clear showing as a bright white: 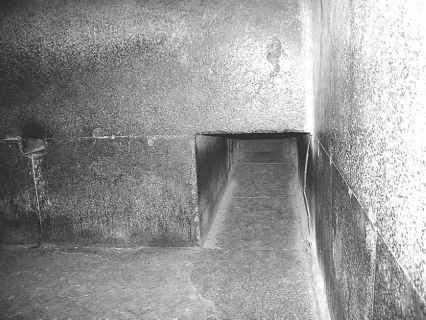 Not to mention the "waterfall" look is now gone as well though we still see the white of scuffed stone along the seam.

Interesting how despite all of this "cleaning" going on we see repeatedly at the plastered joints, whether wall or floor, this very white "leaching" as if it were coming from the very joints themselves. A recurring problem that apparently requires regular maintenance. This is not from flooding the chamber with water.

So no, it is not that I am not seeing what is there, or that I do "not want" to see it, which knowing me as you do is silly, it is that I do not believe what we are seeing from the one 1910 photo is an accurate representation of what was actually there at the time, which no one ever bothered to comment on it, and what is there is not the product of active water, i.e. "running water", but leeching from the plastered joints which not seen in the B&W photos runs right down the middle of these marks. If what is seen in the one 1910 photo were actually how it appeared when the photo was taken then it was something not worth mentioning despite being highly unusual which, other than it looks like it, is what led me to suggest bat guano as something like that would be superfluous to any description of it, i.e. not worth mentioning.

> Why is that such a
> difficult "mystery" for some?

A question to be asked here daily.