Mysteries :  The Official GrahamHancock.com forums
For serious discussion of the controversies, approaches and enigmas surrounding the origins and development of the human species and of human civilization. (NB: for more ‘out there’ posts we point you in the direction of the ‘Paranormal & Supernatural’ Message Board).
Welcome! Log In• Register
Go to: Forum Home•Board•New Topic•Search
Re: Water marks on King's Chamber shaft opening
Author: Thanos5150 ()
Date: August 14, 2017 09:00PM
Origyptian Wrote:
-------------------------------------------------------
> I hope you realize Edgar's "1872" photo is the QC
> shaft that was opened by Dixon and is not the KC
> shaft that shows the vertical stain under it in
> Edgar's photo. We'd only expect to see chipping
> and no sign of flow around that portal, so it's
> not clear what point you were trying to make by
> posting that.

Lol. In my rush I wasn't paying attention and repeated the mistake of others: HERE. But I think this is even more damning as we see a "flow pattern" "dripping down" from a shaft that was actually closed made from chipping, not water. But quite interesting to go to the source:
Great Pyramid Passages 1910. P246-251. They explain in detail the difficulty in taking adequate pictures in the KC having to resort to exploding magnesium powder which was so intense they had to shut their eyes and put their hands over their ears. Many negatives were spoiled by light fanning out in front of the lens which they had to retake the pictures. Interesting that he says nothing of this "waterfall" with the only point of interest is that the top of the shaft is in line with the top of the passage. And the lady's name in the picture is "Grace".

He notes of the south channel, which he is able to crawl inside, that it is lined with plaster and he could feel bursts of air coming down the shaft.

> The photos taken of the southern KC wall are not
> the same photo shoot and so likely involved a
> different time, film, camera, processing, and
> photographer vs. the Edgar session.

Yet they are all of the time before the walls were cleaned of graffiti, and presumably the "watermarks", which is the point.

> The contrast
> and detail resolution are very different than
> Edgar's.

Yes, the others are much better particular compared to the main photo in question.

> No way to make a valid comparison of
> features between the two photo shoots.

Of course there is as we are comparing what they pictured. We can also compare them to later photos which none show such a feature. In fact, this one photo, which required exploding magnesium in blinding flashes, is the only such photo that shows this feature in any "detail". Is it possible that this "waterfall" is nothing more than an optical illusion from the method of photography? Or was it power washed away on purpose with the invention of color photography never to be seen again so that no one would know the real secrets of the pyramids?

So now you are nitpicking the minutia of the processing of the photographs but have no problem with this one in the first place: Funny how that works when it shows you something you want to see its all good yet the ones that say something different there are nothing but problems.

This picture of the base of the wall is quite clear and by far the most quality photo out of any of them:

> Besides, as I said in a previous post in this
> discussion, I wouldn't expect to see a "flow"
> stain out of the southern KC shaft portal since I
> think it's highly likely the stain on the north
> face is due to rain water dragging limestone
> powder onto the KC wall, and the weather primarily
> hit the north face, not the south face.

A reasonable and rational explanation doctor though I would suggest at this point the "flow pattern", only observably in black and white photographs, namely one in particular, that use explosives for flashes is nothing more than an optical illusion.

Look at the light area around the left and top of the opening-this is where the flash is hitting hardest which is reflected as well by the area below it where this "waterfall" is supposed to be: 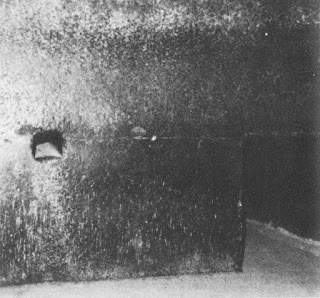