Mysteries :  The Official GrahamHancock.com forums
For serious discussion of the controversies, approaches and enigmas surrounding the origins and development of the human species and of human civilization. (NB: for more ‘out there’ posts we point you in the direction of the ‘Paranormal & Supernatural’ Message Board).
Welcome! Log In• Register
Go to: Forum Home•Board•New Topic•Search
Re: Water marks on King's Chamber shaft opening
Author: Thanos5150 ()
Date: August 13, 2017 11:57PM
Romulus the 2nd Wrote:
-------------------------------------------------------
> What I meant is that theories about water running
> through the GP is always an attack on many
> people's worldview. So yes, I expected angry
> reactions like yours so I was right.

Explain how my reaction was "angry"? Did I make assumptive derogatory remarks towards you?

> I’m open for a discussion about whether it is
> bat shit or not, but I don’t believe it is bat
> shit.

Maybe it wasn't or maybe it was, but despite my bringing it up multiple times now you still have not explained how these markings constitute "indisputable proof" it was not a tomb.

> As shown in the picture, the white markings
> can also be seen on the floor and are all over the
> place. These markings can also be created by water
> and it very much looks like that. Yes, randomly leaching up from the limestone floor. If that's even what we are seeing as when we go back to the original things become far less clear: And why does this picture show what is coming out of it as so white yet the marks that may or may not be on floor level barely discernible if at all: If this chamber was regularly flooded with water from the shaft would we not expect to see a distinct and regular water line let alone one that was the same color as what was coming out of the shaft?

If all one needs is "white marks" G1 is replete with them having nothing to do with G1 as a machine using water. The exposed exterior blocks, for example, are covered in white streaks: 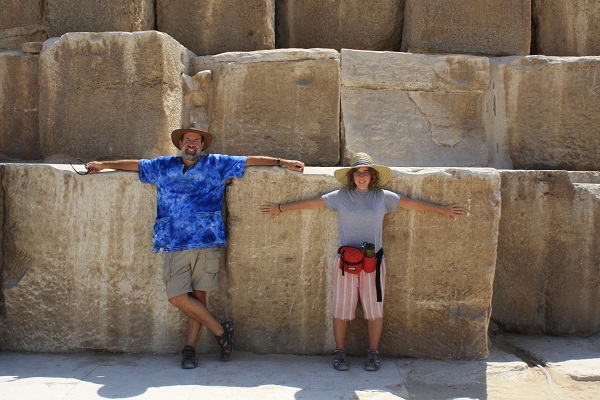 And why does water magically make granite a technicolor milky white as well?

>
> Sure bats can do a lot of shitting and probably
> create the same markings but it depends on what
> you want to believe.

So apparently you want to believe they are made from water regardless of the facts and anyone who disagrees is "angry" with some sinister "world view". Got it. Bat shit. Limestone leaching. Any number of things it could be the least of which from the shaft utilizing water as some kind of machine. I am curious though-if the water is supposedly leaking out of the shaft into the chamber then where did it come from? If G1 used water then does it not stand to reason this water would have been pumped out the shaft not the other way around:

And why don't we see these same water marks inside the shafts? Or water erosion near the exits at the exterior? Why were the shafts closed off in the QC if made for water? How does water get around the multiple sets of doors? Nah, you're right. Probably water. You'll notice on the top of the right ledge a big chunk is missing that is also bone white. Hmmm. Did water do this you think yet leave the rest of the block black? Look at inside this socket in the GG: Did water make it white?

Go find a dark rock outside and chip on it with a hammer and notice how the area you chip is magically "white" by comparison. Now take a black and white picture of it.

> About the researchers you mention, who have never
> mentioned the white marks: There are so many
> details overlooked by researchers.

They were standing right there and noted it had black soot all inside it and at the mouth but completely missed the white "waterfall" of goo spilling out of it? Come on.

> People who
> believe in the tomb-theory will never come to
> conclusions that don’t fit in their theory.

This is nonsense. There are numerous written accounts of these shafts before the walls were cleaned and none report what is seen in this one photo and people like Greaves and Sandys, for example, did not care whether they were "tombs" or not. And even if they were water marks, again, how does this by default negate the tomb theory? Would not even the most ardent supporter look for an explanation of how water got down the shaft regardless of if they thought it was a tomb or not?

How about Egyptologists for one.
Budge:
"This marvelous object [the Great Sphinx] was in existence in the days of Khafre, or Khephren, and it is probable that it is a very great deal older than his reign and that it dates from the end of the archaic period."

Maspero thought it to be "the most ancient monument in Egypt" and considered it very possible the Sphinx predated the pyramids.

Petrie wrote regarding the Valley Temple, based on other Egyptologists dating of an older Sphinx:
"The date of the Granite Temple has been so positively asserted to be earlier than the fourth dynasty, that it may seem rash to dispute the point." Which he then goes on to do just that which is where modern Egyptology's views come from, but I mention this to illustrate the mindset of the day which largely held the view the Sphinx and associated temples predated the 4th Dynasty.

Many alternative researchers prior to 1993 held this view the least of which West himself who wrote extensively on the subject, namely the water weathering, nearly a decade before in the Traveler's Key to Ancient Egypt, 1985 which is what the TV documentary was based on and what prompted him to contact Schoch in the first place.

Only to those who do not know better.