Mysteries :  The Official GrahamHancock.com forums
For serious discussion of the controversies, approaches and enigmas surrounding the origins and development of the human species and of human civilization. (NB: for more ‘out there’ posts we point you in the direction of the ‘Paranormal & Supernatural’ Message Board).
Welcome! Log In• Register
Go to: Forum Home•Board•New Topic•Search
Re: Your Assumptions Are Showing...
Author: Audrey ()
Date: April 21, 2017 01:08AM
Jon Ellison Wrote:
-------------------------------------------------------
> None of those images are isometric. They are all
> oblique. Every one of them.
> No not pedantic, I have too distinguish between
> the two, they have nothing in common and are
> entirely different.
> You've been shown the difference.
> If a book or a site describes them as isometric,
> then they are wrong.
> Surely you can see with your own eyes.
> You don't have to be an expert when it's pointed
> out to you.

This diagram from wiki helped me to visualize "isometric".

Thanos' blogger doesn't explain "isometric", he simply says "Arranges parallel lines diagonally in a work to give a sense of depth". But according to the diagram, all 3 axes would be an equal 120° apart. I don't see that in the Chinese painting.

This gets complicated, and one can't get an in-depth understanding of all these perspectives by reading just 1 or 2 websites. Orthographic projection can be defined as " a collection of 2-D drawings that work together to give an accurate overall representation of an object. " Yes? Would this have been known or used by 1700's Chinese?

Anyways, the point wasn't Chinese art, it was Egyptian art. Now we have a better understanding of why the AE used no perspective in their art, they didn't know about it. 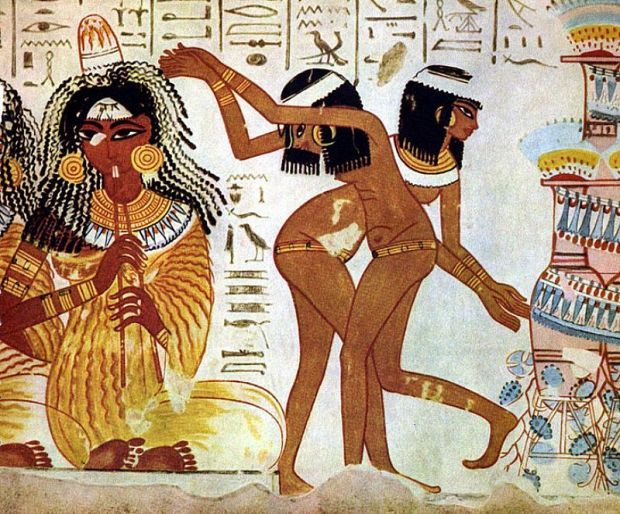 I call it one dimensional. Did they ever use perspective? Thanos likes to posts pictures spanning 2000 yrs, and I have yet to see a painting that has perspective. I think the above painting is 1400 b.c., which we really can't call it AE if we're talking about the pyramid age. All it tells me is that their art had barely improved in 1000 yrs and says nothing about artists during the pyramid age. I think people see the pretty colors and think, oh how nice how sophisticated.

Who was the first to use perspective?

Since they had no understanding of perspective, how were they able to create some statues that show movement and a mood (for lack of a better word)? How would art professionals describe this statue?

This statue seems to me to be advanced art or skill or whatever. They had the ability to carve that beauty but were not able to draw in 3D. I don't get it.

Thanks for the education Jon, it's refreshing to read posts that focus on a subject and not office gossip of - he said this and then he said that, and whose main objective is not to put someone down but to share info. What a concept, eh?