Once again Origyptian ignores the question and goes right back to the "monuments".

> Are you suggesting that those monuments do not
> represent an enormous amount of evidence of the
> capabilities of the culture that built them?

I have no doubt you understand the question, yet you choose to pretend to answer it time and again with the same response about the monuments never once addressing the actual question which asks for evidence other than that. If you don't know, which we all know you don't, just be honest for once and say so.

> First
> of all, I never said the Dynastics adopted those
> monuments, I said they adapted those monuments.

And I don't care and say it for what it is, "adoption", a term coined by the late Alan Alford nearly 20yrs ago, the one thing I do know about him: "Adoption Theory".

In my book ‘The Phoenix Solution’ (1998), I noted that virtually all of the supposed evidence for 4th dynasty construction of the Giza Pyramids and Sphinx was, in fact, consistent with an adoption scenario. In other words, it seemed entirely plausible that the Egyptian kings Khufu and Khafre had adopted pre-existing structures in the form of the Great Pyramid, the Second Pyramid and the Sphinx...


Yet another example of your non-existent "revolution" you think has been happening here in "the last 2yrs".

> Second, what other evidence do you expect?

I will never understand why you are so often incapable of being honest. I know you are not stupid. The question has been explained many times before and if you truly do not understand what "culture" is beyond stone monuments you have even less reason to be here than you already do.

The irony, is that in my last few posts I am answering this question for you, like below.

> > You deny the
> > AE ability to craft hard stone, what I am
> getting
> > at is according to you something like this
> would
> > have to be evidence of one of the many cultures
> > you envision occupied AE prior to the Dynastic
> > Egyptians:

> How many times will traditionalists try to use
> that stone as evidence of provenance of such
> stonework in the 3rd millennium BC?

I know, right? How stupid must those "traditionalists" be to think 3,000yrs of uninterrupted depictions of pharaohs with their names on it and all the cultural trappings that go with it specific to only AE culture might actually belong to those very people. How foolish that their first thought 150yrs ago, which nothing has changed to the present day to contradict it, was instead they must be from a non-human/different species of human LC tens of thousands if not millions of years old.

> I've already
> mentioned many times that in my opinion, anyone
> with at least one functioning eye can see the
> vastly different craftsmanship that went into
> those chicken scratched graffiti glyphs on the
> base compared to the magnificent skill that went
> into the figures themselves.

So if the quality of the inscription is one of the determining factors then what are we to make of this: I would get your eyes checked as the statue inscriptions look exactly how they should which unlike the statue cannot be polished so it should be common sense they would retain inherent imperfections from hand engraving. Or is your expectation they were routered in with a CNC machine?

> It's this circular
> reptition of the same point that makes me avoid
> addressing your points all over again, year after
> year.

Yet you do all the same time and again offering the same evasions as always. And please understand the point of this is not for you, but a reminder for the readers who might still take you seriously at this point.

> At this point it's better if we simply agree
> to disagree than waste more bandwidth covering the
> same debate, discussion after discussion.

Please be honest as this is not a mere matter of "disagreement", nor are we having a "debate", as it is a point of fact you have no evidence to answer the question which anyone with at least one functioning eye can understand. And if you wish to stop wasting the bandwidth I suggest you stop promoting and imposing your world view on the rest of us by repeating the same nonsense over and over again post after post.

> > You believe this statue is tens of thousands of
> > years old and from the LC and the writing was
> > scrawled on there by AE squatters, right? I
> just
> > want to be clear.

"Could just as well be" AE or could be an LC millions of years old. Lol. "Who knows"? Egads.

Ok, so now that we cleared that up, when asked for evidence of the LC culture beyond the stone monuments you can answer now all of at least the igneous rock statues and artifacts like these: 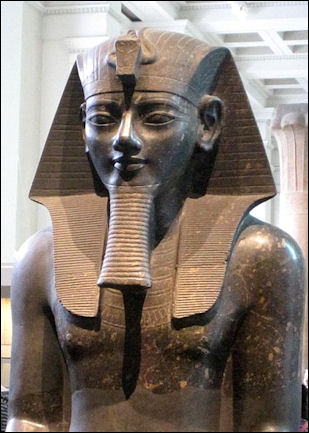 If you are to be believed, that all of this is tens of thousands if not millions of years old, no one can say for sure, made by your LC, then in fact there is not only an abundance of their culture to be found beyond the monuments, like for example what clothes they wore, but also of what they looked like as these are the faces of the LC. You believe they were another species of human, or perhaps non-human-can you explain what it is about their anatomy that leads you to this conclusion? For example, what is it about these two that suggest to you they are "non-human" or a different species of human: Is it the hawk growing out of the back of his head: You also recently said that you are not sure if these things are 6,000 or 600 million(?) years old and have oft repeated we have no idea of knowing how old these "things" are. I wonder what their statues could tell us that would give us a clue:
Ram: 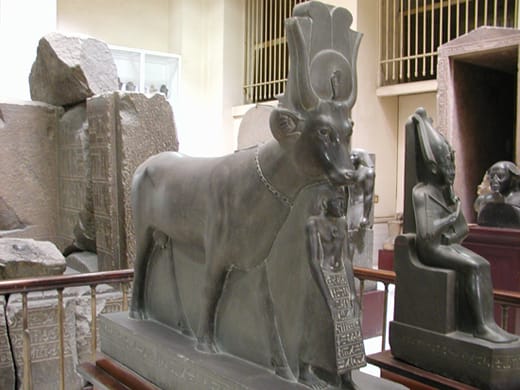 Do you think the LC had domesticated dogs millions of years ago? Cats? Cows? I wonder if knowing when these animals first appeared in the anthropological record might give us some clue as to when the LC lived. Yet you just can't figure out how anyone might have a clue when these people lived and to you could just as easily have been tens of thousands if not hundreds of millions of years ago. Man, those traditionalist sure are stupid. What they hell are they thinking?

> Not just any "stone", mainly those which for which
> no tools or methods have been identified for 3rd
> millennium Egypt.

Can you give a few examples?

> And those tens of thousands of
> stone vessels discovered in the basement of Step
> Pyramid add an interesting ingredient to further
> amplify that mystery.

Right, like possibly the core of the stepped pyramid dates to the 1st or 2nd Dynasties which part and parcel of this stoneware are the seals and inscriptions found on them of these earlier pharaohs. Once again, you will find this idea is nothing new, one however, that I am keen on as well.

> But that's a sidebar which
> I'm not focusing on.

Good luck with that.

> Where is the evidence that such achievements were
> possible in 3rd millennium BC Egypt?
> Any artifacts
> of such tools?
> Any inscriptions describing or
> depicting such tools? Do the tombs of any
> architects, designers, builders, gang
> superivisors, etc. bring any of them to the
> afterlife? I'm certainly not the only one who's
> noticed that there indeed is a body of tools and
> documentation remaining behind from that era, but
> virtually nothing at all that speaks to their
> ability to achieve much of that stonework. Ther
> are far too many enigmas to ignore the disconnect.

That you are "not the only one" is beyond an understatement and pointed proof or your egocentric nature.
Its interesting that you use the lack of these things in their tombs as "proof" yet ignore if they did not exist they could never have made the very tombs in the first place which this evidence is not found. 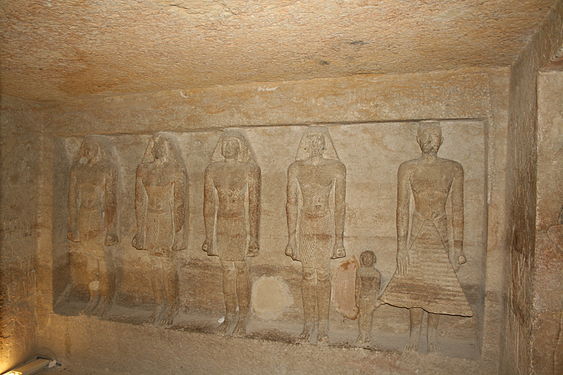 By your logic then, these are once again not the work of the AE, but rather the LC. Again, if we beleive what you say it is not the LC that is missing from history but rather the Dynastic Egyptians themselves.

> I don't understand your logic there. Why wouldn't
> they be able to add a block of stone where one is
> damaged or decayed in order to attempt to preserve
> the original condition?

So you are saying the LC also built Saqqara as well? So this is the work of the LC: But what tools would they use to make these repairs? How would they carve the blocks to fit or lift them to set them in place? Several OK writings spoken of tell us how they are getting boatload after boatload of stone blocks from the quarries at Tura and Aswan, inlcuding lots of granite which are also comprised of finished peices such as sarcophagi, doors, offering tables, ect, which according to you would have been for repairs and not construction. Did the LC just leave these boatloads of blocks lying around the quarries to be used for 3,000yrs of repairs? How did they move the blocks or get them on to boats? How did they unload them, drag them to the site and install them one after the other just perfectly to match the stone already there so that no one would ever be any the wiser they were not part of the original construction?

By giving them the ability to repair these monuments you have given them the very principles to build them in the first place. And yet by the same token the tools to do such repairs are also missing so I guess this means its all tens of thousands if not millions of years old, repairs and all.

> Especialily if they
> adapted those monuments into an expression of
> their own funerary context.

> I tell you what, give me a few thousand
> investigators for a few centuries, just like
> orthodoxy has had. Then we'll see whether it's
> possible to arrive at a more realistic narrative
> than what orthodoxy has been able to concoct with
> a similarly immense effort.

Yes, too bad none of these "thousands of investigators" ever shared their findings with anyone ever. They kept it all to themselves telling us sheeple what to believe leaving us with nothing to figure it out for ourselves. The grandest of conspiracies. If only we had access to all of their notes or digs or even the literally millions of artifacts they discovered. If only we could see these monuments for ourselves, or any other ancient culture for that matter, to give context to the history of the ancient world. My, if we did I bet the obvious answer would appear that instead of any of this appearing as it seems, it would all be magically turned on its head attributed to the work of a non-human LC tens of thousands if not millions of years ago. And not just Egypt but everywhere any big blocks are found.

> That's your characterization, not mine.

Of course its not yours, but it is the truth nonetheless.