Mysteries :  The Official GrahamHancock.com forums
For serious discussion of the controversies, approaches and enigmas surrounding the origins and development of the human species and of human civilization. (NB: for more ‘out there’ posts we point you in the direction of the ‘Paranormal & Supernatural’ Message Board).
Welcome! Log In• Register
Go to: Forum Home•Board•New Topic•Search
Re: Your Assumptions Are Showing...
Author: Thanos5150 ()
Date: April 15, 2017 05:19PM
Martin Stower Wrote:
-------------------------------------------------------
> As we have seen, when it comes to the noble cause
> of denialism, he is prepared to posit (or support
> others in positing) massive programmes of
> restoration or repair by these very same dynastic
> dimwits:


From the LC Home Depot at Aswan they obtain a sarcophagus and lid, a "splendid" pyramidion, a false door of granite, offering tables, doors and settings of granite which the latter are to be installed in the upper chamber of the pyramid. What luck that in the 6th Dynasty there were still complete LC granite funerary kits flux capacitor units left in stock. Which begs the question, given the AE were able to obtain these complete kits left behind at the quarries by the LC, what were they originally for?

Since the AE could not work granite this means these are actually LC offering tables, or perhaps control panels, yet more evidence of LC culture. 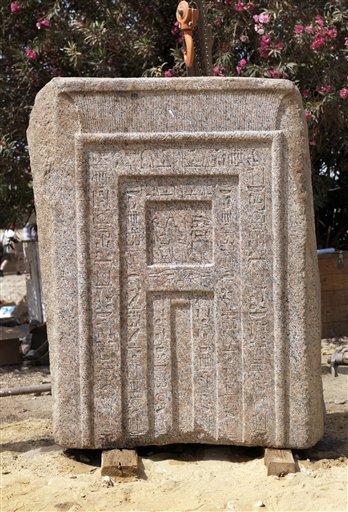 Why the LC obsession with false doors? Which just so happens to be the sarcophagus of Khufu-ankh ("Khufu Lives"), 5th Dynasty, which yet again we can see several Khufu cartouches. And note the LC obsession again with the Mesopotamian palace facade building. And with this sarcophagus were found a false door:

Which we find the Khufu cartouche again.

All this and more just lying around at the tens of thousands if not millions of year old LC Home Depot 500 miles away at the Aswan quarries all for the AE to find as much as they needed for 3,000yrs. Amazing.

The primitives were able to build many boats, canals, and beyond somehow being able to find and bring a complete LC granite funerary magnatron kit, were also able to obtain from the LC Home Depot enough "very large granite blocks" to load several ships which they also brought hundreds of miles up river, unloaded, all with the intent of installing them inside or around the pyramid, a pyramid of "rubble" they built to apparently emulate the natural "mountains" they saw at Giza they could not comprehend were artificial until the Greeks told them in the 5th century. All of the amazing things they could do to repair these things, yet just couldn't figure out how to do it themselves from scratch.

By definition, evidence of the LC culture(s) is ubiquitous throughout all of Egypt in any period from structures to statues to vases and bowls to false doors and elaborately carved "stone boxes" depicting palace facade buildings to weird water basin shaped "Djed engine caps"- ect, ect. In fact, so complete is the pervasiveness of the LC we find almost nothing but their culture. I'm beginning to think we have it all wrong in that instead of there being zero evidence of the LC, in reality there is zero evidence of the Dynastic Egyptians.