Mysteries :  The Official GrahamHancock.com forums
For serious discussion of the controversies, approaches and enigmas surrounding the origins and development of the human species and of human civilization. (NB: for more ‘out there’ posts we point you in the direction of the ‘Paranormal & Supernatural’ Message Board).
Welcome! Log In• Register
Go to: Forum Home•Board•New Topic•Search
Re: ...just a lot of similarities at the 36 second mark and super telltale machine markings at 9:30 min mark
Author: Origyptian ()
Date: October 16, 2017 03:27AM
Jon Ellison Wrote:
-------------------------------------------------------
> Hi Racho.
>
> If you don't mind me chiming in.
>
> The rock hardness issue isn't an issue at all, in
> that what were looking at here are tooling
> signatures.
> Some stuff is in extraordinarily hard rock, some
> less so, The hard stuff defies explanation.
> Anyway that aside..
>
> Tooling Signatures or Witness Marks.
>
> The terms "machine tools", "power tools" etc. are
> thrown around on here seemingly without proper
> regard for what they actually are, how they
> function, and more importantly what signature they
> leave behind.
>
> Three kinds of tools.
> There's more and and also grey areas, but let's
> just look at the main three for now.
>
> Class A.
> Hand tools.
> These are tools where the motive force and the
> positioning and guidance are entirely provided by
> the operator.
> Examples would be a hand saw and a sewing needle.
>
> Class B.
> Power Tools.
> These are tools where the motive force is provided
> by other than the operator, but the tool is
> positioned and guided entirely by the operator.
> Examples would be a chain saw, a wood turning
> simple lathe and an electric tooth brush.
>
> Class C.
> Machine tools.
> These are tools where both the motive force and
> the tool guidance and positioning is provided from
> a mechanical source.
> Examples would be a machine lathe or drill press.
>
> Hand tools A. Are hard work and although can be
> used with high precision if used along with
> precision measuring instruments.
> They generally do not leave repeating signatures.
>
> Power tools B. make life easier for the operator
> and can be used with precision, if like hand tools
> they are used along with precision measuring
> instruments.
> They leave precise repeating signatures in the
> micro domain, like for example a rotating wire
> brush, each wire leaving its mark repeatedly, but
> in the macro domain produce non precision, non
> repeating signatures. Like the track of a powered
> rotating wire brush moved by hand across a
> surface.
>
> Machine tools C. are often used with precision and
> repetition, they allow for precision placement of
> the tool and progression with great accuracy as
> they eliminate the human propensity to Err.
> Machine tools often do have an initial human input
> but rely on a mechanical datum external to the
> work piece to eliminate human error.
> They typically leave a high precision surface and
> exhibit a repeating and constant signature.
>
> Anyways a handle on all of the above can go some
> way to identifying the probable techniques
> employed from the various signatures and witness
> marks we see today.


This frame takes my breath away: 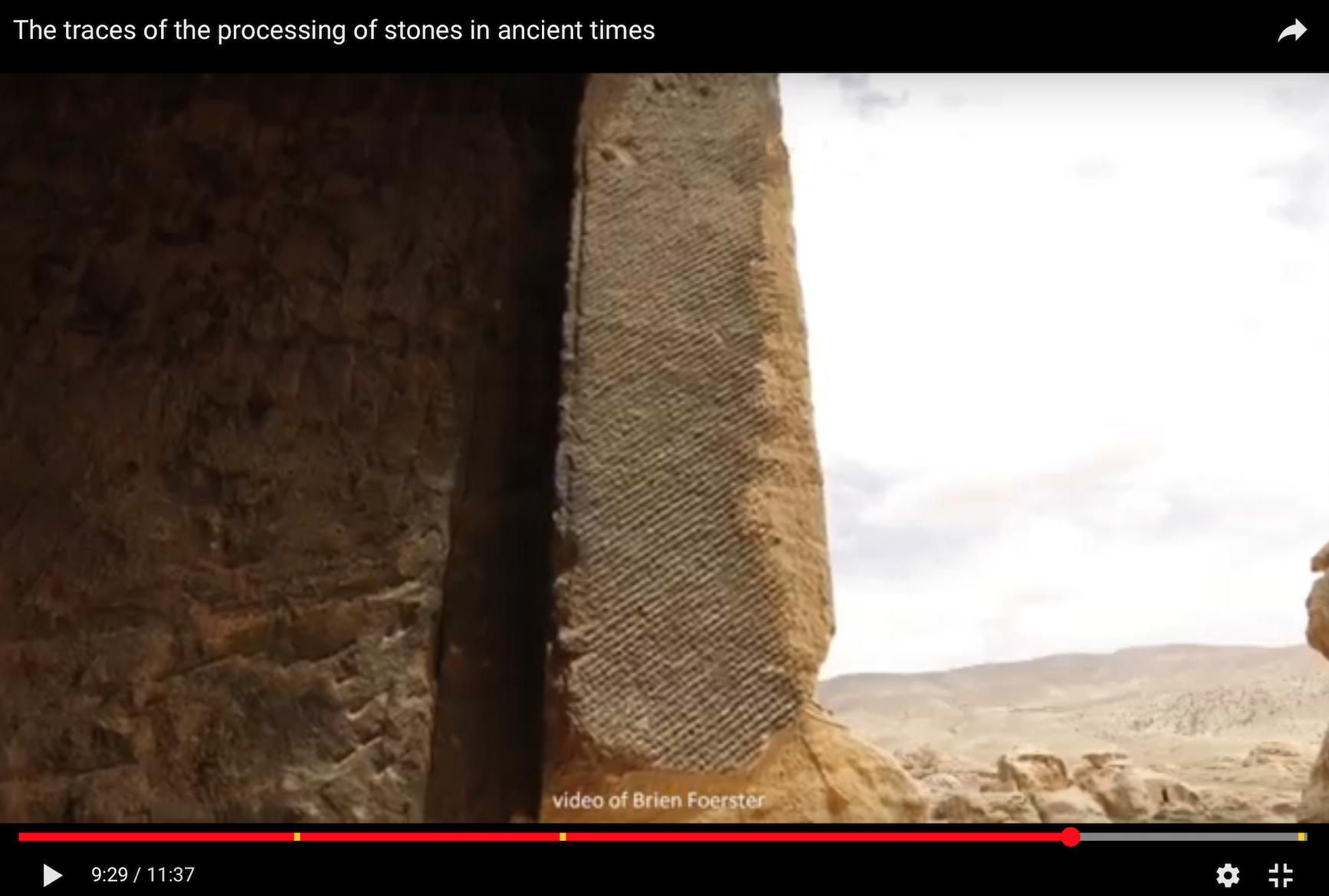 I don't see how that could be a hand-worked surface. The striations are straight, parallel, equally spaced, and I see no obvious segmentation. No overlap, no curves. It looks like a single machined surface. The only apparent deviation from perfect parallel is an optical illusion that's caused by the perspective from the camera being located toward the bottom of that tooled face. But when you compensate for the perspective viewpoint, it certainly looks like a smoking gun for a machined surface.

Alternatively, I'm wondering if it could be ancient troweled adhesive that once held a layer of valuable surface material that has since been lost or pilfered. There does seem to be a lot of relatively modern hacking amidst what clearly seems to be darker, older stonework.