And so for example, in this video, [www.youtube.com], we see the following:


1. The figures on the right wall are within a field that has been sunken into a concavity below the wall plain to allow the figures to emerge "raised".

2. column in the center shows a wraparound graphic that's sunken below the plane of the excavation tool marks.


-- Marker 14:05:Note the left wall figures which are sunken below the wall's face plane.


1. Note the column on the right where the wraparound graphic is sunken below the face plane of the column.

2. Note on the back wall how the entire field of figures is sunken behind the main tool marks on the wall. It seems clear where the concavitiy begins according to the disruption of the vertical tool marks on the upper aspect of that wall.


The chisel marks associated with the figures are clearly not nearly as straight and precisely parallel as the larger wall excavation marks. I believe that entire field of figures is within a concave recess chiseled into the original wall plane


> This is a modern quarry in Italy. Note the long
> tool marks to the right of the worker:
> [www.artofmaking.ac.uk]

And note the total absence of such tool marks to the left of the worker. It's not obvious that those parallel tool marks are made with a hand held chisel. The worker in the photo isn't working on that section of stone, so how do we know how those striations were created?

Also, unless that worker is ambidextrous, he's of the opposite handedness vs. the worker who made those parallel tool marks on that stone face.


> "At some modern quarries, however, more
> traditional methods of quarrying can still be
> seen. At the peperino tuff quarries near Marino,
> in the Alban Hills south-east of Rome, blocks are
> still extracted with specially-designed long
> versions of the point. The quarryman uses this
> tool to carve narrow separation trenches along the
> side and rear of the desired block.[16] The block
> is then split from the bedrock using numerous
> small flat wedges, or sometimes a bundle of point
> chisels, hammered into the stone along its
> base.[17] The block is then pulled off the quarry
> face with a rope down to a point where it can be
> loaded for transport.[18]"
> Here.

This excerpt is about the separation trench, not about shaping the face of the stone after separation from an adjacent block.


> ...
> Longyou caves:
> [i.imgur.com]
> [interesno.cc]
>
> As said so many time before, clearly demonstrated
> in both pictures and text, these same chisel marks
> are found all over the world wherever stone is
> quarried no different in ancient times than today.

I disagree that this is clear in those photos of the walls, columns, and ceiling of Longyou, unless you know of other citations that more specifically address those particular tool marks. In fact, in Egypt we see those "herringbone" marks which make no sense as hand-chiseled tool marks unless the quarry workers switched between left-handed and right-handed workers on alternating rows. Likewise for this one allegedly from the Roman Empire: 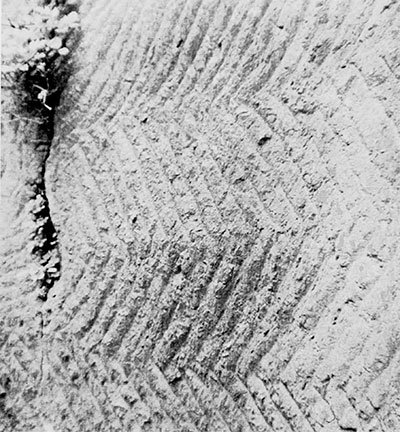