> As I've said, the names don't matter. At their
> basest forms cartouches are "icons" reffering to a
> specific king therefore regardless of how we
> translate their names we look for the context of
> these "icons" which no matter where we look or
> when the 4th Dynasty pharaohs are grouped together
> after those of the 3rd, and the 2nd, and the 1st.
> Seriously, what does it matter if that icon
> translates to "Menkaure" or "Bob"?

It matters to eygptology. If it were "Bob" it wouldn't name a king who built G3.

Quote
The Nile: Notes for Travellers in Egypt 1890 pg.141 by By Sir Ernest Alfred Wallis Budge
Herodotus and other ancient authors tell us that Men-kau-Ra, or Mycerinus, was buried in this pyramid, but Manetho states that Nitocris, a queen of the Vlth dynasty, was the builder. There can be, however, but little doubt that it was built by Mycerinus, for the sarcophagus and the remains of the inscribed coffin of this king were found in one of its chambers by Howard Vyse in 1837.


Quote
Egyptian Chronicles: With a Harmony of Sacred and Egyptian ..., Volume 1 1861 pg. 141 by William Palmer
Still since even falsehood must have had some source one may reasonably inquire after the source of this notice; and we may perhaps find it, if we put together the following facts : Herodotus was told that the third pyramid was built by Mycerinus; and rightly for his name and sarcophagus have been found in it


Quote
Synopsis of the Contents of the British Museum 1847
Part of the mummy shaped coffin of king Me- ka-re the Mycerinus or Mencheres of the Greeks, builder of the third pyramid. Wood. 4 ft. 2 in. l. Found in the third pyramid by Col Howard Wyse 1837, and presented by him in 1838

On and on it goes. All through the 1800's, after Vyse's discovery, the cartouche is identified as the king of G3, BECAUSE IT WAS FOUND IN G3.

There are two Abydos lists. Now the Abydos king list that Egyptology puts so much value in, WASN'T DISCOVERED UNTIL 1864 BY MARIETTE. I'm not shouting with the caps, I'm emphasizing.

Quote
The Dawn of Civilization: Egypt and Chaldaea, Volume 1 1894 by Gaston Maspero
The first table of Abydos, unfortunately incomplete, was discovered in the temple of Ramses II.by Banks, in 1818; the copy published by Caillaud (Voyage a Meroe, vol. iii. pp. 305- 307 and pl. lxxii, No 2) and by Salt ( Essay on Dr Young's and M. Champollion's Phonetic System of Hieroglyphics, p. 1, et scq., and frontispiece) served as a foundation for Champollion's first investigations on the history of Egypt (Lettres a M. de Blacas, 2r Lettre, p. 12, et seq., and pl. vi.). The original, brought to France by Mimaut (Dubois, Description des antiquities Egyptiennes, etc., pp. 19-28), was acquired by England, and is now in the British Museum. The second table, which is complete, all but a few signs was brought to light by Mariette in 1864, in the excavations at Abydos, and was immediately noticed and published by Dumichen, Die Sethos Tafel von Abydos, in the Zeitschrift, 1864, pp. 81-83. The text of it is to be found in Mariette, La Nouvelle Table d' Abydos (Revue Archeologique, 2nd series, vol. xiii), and Abydos, vol. i. pl. 43.

Look closely, you won't find the big three on it. So that means the table found in 1864 is the one you are relying on. Now how is it that the cartouche was already determined to be Menkaure, BEFORE a kings list was found to substantiate it? And it couldn't be the Saqqara list which was discovered in 1863.

So they came to the conclusion, in 1837, it was Menkaure's cartouche based SOLELY on "context", the location where it was found.

> As below, obviously not. Regardless of the fact
> Dynasties are the invention of Manetho, even if we
> discard the dynasties this still does not
> fundamentally change their order or relative
> groupings.

That isn't the point. The point is HOW it was determined that a particular cartouche belonged to Menkaure, and WHY this assumption exists today.

> Apparently people of the 19th Dynasty.

> While there are obviously differences with
> Manetho, there are enough anchor points in the
> Abydos list that make it, or Manetho as it were,
> more or less generally correct chronologically.
> Inserting or deleting a few kings here or there,
> regardless of how long they ruled, does not make
> the 4th Dynasty kings all of a sudden now the 25th
> Dynasty kings ect.

This is true in a profession where it doesn't matter if you write left to right or right to left, top to bottom or bottom to top, leave out letters or add letters. With these rules anything is possible.

> Despite the flaws of Manetho's list, and the
> inconsistency of the various early King Lists,
> there is a congruity of anchor points that when
> taken together are accurate enough to give a
> pretty decent general chronological rule from the
> very least the 1st Dynasty to the 19th.

And I'm trying to show you how those anchor points came about, and that they are not based on evidence.

> So, despite all of the archaeology and
> corroborating 19th Dynasty AE king lists and
> inscriptions you are saying because an incongruous
> wood coffin with his name on it was RCD to the
> 12th-9th centuries this means Menkaure was a
> pharaoh of the Late Period? Or maybe, as was
> common of the late period, this was an intrusive
> cult burial. You do know about funerary cults
> right?

Correct me if I'm wrong, but this inscription says he was a king. RCD says he lived during the 12th-9th cent b.c.
So where is the Menkaure of the 4th dyn? You'll say he's on a king's list. And how do we know that's him on a kings list? You'll say - it's well attested?

Now the one found in G3 is not of the 4th dyn, not even close, and couldn't have built G3.
The Menkaure found in G4 is? Anyone's guess. Possibly also of the 12th-9th cent b.c.
So where exactly is the evidence for Menkaure building or being a king in the 4th dyn?

> But its nice to know you put such faith
> in RCD now so hopefully in the future you'll
> dispel with all the nonsense about the 700+
> samples taken from the OK across 3 different
> studies which place its entirety at the very least
> sometime after the 4th millennium. Good to know.
> Funny how science works.

I don't put such faith in carbon dating. But the mainstreamers do, and since they do I ask; how do you and they reconcile RCD dates with cartouches. I know enough about RCD to know that the younger the item, the more accurate the dating and wood is probably the best material for dating.

> Who cares. All that matters is the icon: 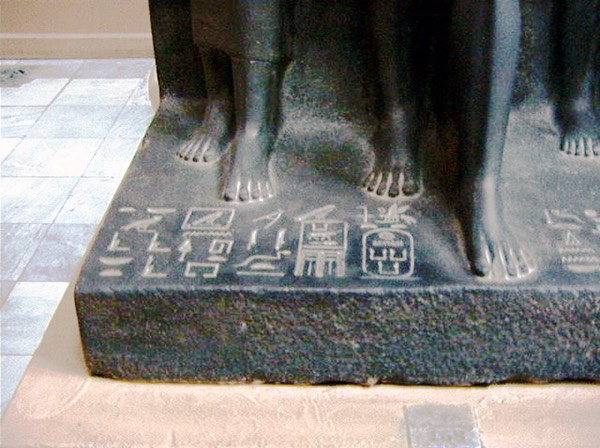 THAT is the point. An icon around which a king is built.

They kept the frankenbaby and threw out the bathwater. The cartouche in G3 remains today as the one who built G3. But there is no evidence to substantiate that conclusion.

You seem to be under the same impression as all mainstremers here. That being; Egyptology in the 1900's gathered together all the evidence and came up with what they have today. The truth is, a great deal of it was already assumed in the 1800's and before. Specifically the order of the big 3 and their names.