> > I don't think you understand the consequences
> of
> > Vyse finding Menkaure's cartouche.
>
> I'm sure you don't mean that.

I'm getting the impression you haven't read the literature about the foundations of Egyptology. If true, no, you wouldn't understand the consequences. 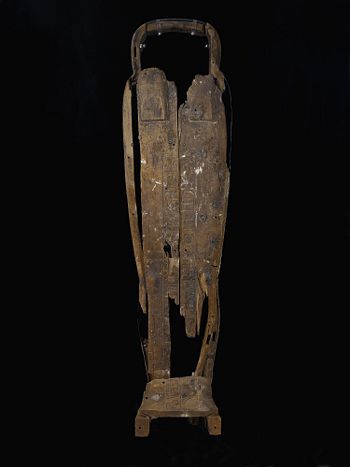 According to Vyse, it was found in the 4th pyramid :


Quote
Operations carried on at the pyramids of Gizeh in 1837" pg.48
The walls also of both the chambers were perfectly plain; but, upon one of the slabs composing the roof, some hieroglyphs had been described with red paint, and, amongst them, the cartouche of Mycerinus.


> I think you may be mistaken. [See Martin's
> post]. I find no information the coffin itself was
> RCD, but rather only the skeleton found inside (?)
> which dated to less than 2,000yrs ago (other
> sources, the 2nd century AD). Verner.

How convenient that Verner left out the best part.
Read it from those who did the test


Quote
STROUHAL E, VYHNÁNEK L, GABALLAH MF, SAUNDERS SR, WOELFLI W, BONANI G, NĚMEČKOVÁ A, 2001: Identification of Royal Skeletal Remains from Egyptian Pyramids. Anthropologie (Brno) 39, 1: 15-23'.
A coffin with a mummy in the depository of the British Museum were attributed to King Mycerinus. According to our examination in 1990, the Egyptological dating of the coffin was confirmed by 14C date (range 12th-9th cent. BC), while the mummy was found to be a natural one and as late as from 7th-9th cent. AD.

Notice the use of the name "Mycerinus". Still... in 1990 they are linking it to Herodotus.

> No. What it means, since we are speaking in
> absolutes, is that the skeleton was intrusive as
> was the sarcophagus which is believed to date to
> the Saite period:
>

The coffin was not part of the original
> funerary equipment of Menkaure, but was made for a
> later restoration of his burial, as indicated by
> both stylistic and epigraphic evidence.

If you read Vyse and where the coffin was found (under a pile of rubbish), the above statement becomes nothing more than pure guesswork. You're not going to the sources, you're believing the tales modern Egyptology has spun.

Why doesn't the British Museum give the RCD dates? I'm guessing it's too embarrassing of a mistake to acknowledge.

> > Quantity does not
> > verify a supposition.
>
> Its quantity in context that matters.

Then you have investigated the location where every Menkaure cartouche was found? You cannot make this statement without doing so. Unless you are just accepting, without question, what Egyptology says.
The context for the wood coffin was perfect; inside G3. But they were dead wrong. "Context" does not supersede science and investigation. The "context" has been fabricated by Egyptology over the last 500 years. Would you believe their "context" over RCD?

> I am confident the RCD is correct and that in fact
> both coffin and body are intrusive.

> But, no, neither have anything to do with why
> Menkaure is placed in the 4th Dynasty regardless.

Herodotus named the big 3 : Cheops > Chephren > Mycerinus. Manetho placed them in the 4th dyn. of a table he made up.
Why are they still called by those names today? Why are you constantly reading that such & such name is a Hellenized version of these names? Why did Wilkinson in 1837 and also Rossetti make a point of converting the Greek names to hieroglyphs? Because the greek names had already been accepted, and if the hieroglyphs were not an equivalent they had no other way of linking a name to a specific dynasty.

Quote
Manetho's dynasties
1. Soris reigned 29 years.
2. Suphis reigned 63 years. He built the largest pyramid which He rodotus says was constructed by Cheops. He was arrogant towards the gods, and wrote the sacred book ; which is regarded by the Egyptians as a work of great importance.
3. Suphis reigned 66 years.
4. Mencheres 63 years.
5. Rhatceses 25 years.
6. Bicheris 22 years.
7. Sebercheres 7 years.


> Yes, Menkaure is missing, but here we have a list
> that shows the 4th and preceding 5th Dynasty kings
> (among others) in more or less the correct order.

Now how would anyone know what the "correct order" is? Who established the correct order? The correct order was taken from Manetho and Herodotus. No ifs and buts about it. I'm surprised you didn't know this.

> Sneferu
> Khufu
> Djedefre
> Menkaura
> Shepseskaf
>
> All 4th Dynasty kings (among others) in the
> correct order.

According to whom? Who was it that determined the order?

> There are other lists that predate Manetho which
> show the correct order as well, meaning no, again
> as we have discussed this before, the placing of
> Menkaure in the 4th Dynasty group has nothing to
> do with Manetho which as we can see goes as far
> back in King Lists to at least the 19th Dynasty.
> Also, speaking of Manetho, he lived in the 3rd
> century BC yet Herodotus, nearly two centuries
> before, wrote of the pyramids of Giza belonging to
> Khufu, Khafre, and Menkaure respectively, yet for
> some reason you still think this all hinges on
> Manetho?

No, it doesn't ALL hinge on Manetho. But the dynasties do. The rest hinged on Herodotus. Before Vyse's discoveries, they had no proof of the 'correct order', they only had Herodotus and Manetho. Read the literature. Even wiki has this information. The 1800's were spent linking cartouches to the GREEK names. The 1900's cemented the transition from Greek to hieroglyph. The antiquarians pounced on the cartouche Vyse found. They NEEDED to find the big 3. But they had nothing, at that time, to back up the assumption that the cartouche was truly that of Mycerinus, and that he built G3. Nevertheless, the assumption stuck. And everything egyptology has done since, has been to uphold the Mycerinus assumption. Because without it, they're back to 1837, with no proof of Mycerinus. It started with one cartouche on a wood coffin that provided proof of what they had already decided. All the antiquarians in the 1800's wrote of how that cartouche was Mycerinus. In the 1900's they stopped mentioning Mycerinus, and spoke as if Menkaure were a modern translation.

> Dozens of full and partial statues were found
> buried around G3 bearing Menkaure's name. Dozens
> of seals have been found bearing Menkaure's name
> in the Workers Camp and Harbor in which other than
> a few of Khafre no other pharaoh's name is found.
> Near the entrance there is an inscription believed
> to have been written by Khaemweset in the 19th
> Dynasty which according to Rigano:
>

The inscription was badly eroded and has
> only been partially translated. It says Menkaure
> was buried on the twenty-third day of the fourth
> month of the winter season, about MArch, with all
> his possessions. The year was eitehr not present
> or eroded away. Four cartouches are barely
> visible, the names in three cannot be read, the
> fourth contains Menkaure's name. And what does the RCD tell you about Menkaure? Were all the statues found buried around G3 of the Menkaure of the 12th-9th dyn? Do you place science above the quantity of cartouches found?

Actually I read all of Qar's inscriptions, his titles were many :

The hieroglyphs can be seen here. Somethings about them don't jive. There was a wooden sarcophagus found in Qar's tomb. What do you bet it hasn't been C14'd.

> The idea Menkaure belonging to the 4th Dynasty
> pharaoh group or that he was associated with G3,
> regardless of "whether he built it or not", is
> only based on Manetho simply has no merit and is
> clearly contradicted by literally all of the
> evidence.