Bad news is I still have the same problem. The world of HVAC repair is a seedy one on par with auto repair. Grrr.

Anyhoo, RE: ""Mernere-Shines-and-is-Beautiful," of the queen."

Regardless, its clear they knew it was man-made, they acknowledge they had not only "seen" it, but were at the very least busy fetching granite objects, like sarcophagi, pyramidions, false-doors, offering tables, blocks, and the like from the quarries to install inside of it (them). Not to mention, obviously the building and utilization of ships to transport these objects.

His majesty sent me to Ibhet to bring the sarcophagus (named): "Chest-of-the-Living," together with its lid and the costly, splendid pyramidion for the pyramid (called): "Mernere-Shines-and-is-Beautiful," of the queen.

Ibhet is a black granite quarry in Nubia used well into the Middle Kingdom. Is this where the LC made their "stone boxes" with lids leaving unused ones lying around for the AE to take as they pleased tens of thousands of years later? And the pyramidion too which would have been something like this: 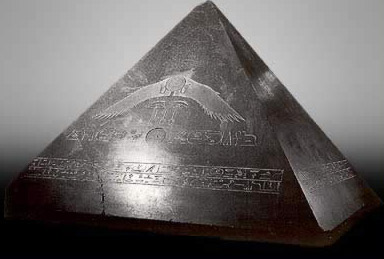 Or:
His majesty sent me to Elephantine to bring a false door of granite, together with its offering-tablet, doors and [settings] of granite; to bring doorways and offering-tablets of granite, belonging to the upper chamber of the pyramid (called): "Mernere-Shines-and-is-Beautiful, " of the queen.

Again, were these objects just lying around from the LC at the Elephantine granite quarry? Which they merely planned to transport and retrofit inside a pyramid 500miles away that they "may or may not have built"?

Weni (Uni) also tells us about transporting these objects:

A fairy tale? A children's story?

Regardless of what this may or may not say about the great pyramids, or pyramid building in general, the AE need to be given their due.