Mysteries :  The Official GrahamHancock.com forums
For serious discussion of the controversies, approaches and enigmas surrounding the origins and development of the human species and of human civilization. (NB: for more ‘out there’ posts we point you in the direction of the ‘Paranormal & Supernatural’ Message Board).
Welcome! Log In• Register
Go to: Forum Home•Board•New Topic•Search
Re: Equinoctial Pyramid Alignment
Author: Thanos5150 ()
Date: February 19, 2017 09:26PM
Manu Wrote:
-------------------------------------------------------
> All this work has long been done. All four shafts
> align to those four targets at the same time.
> There are no other plausible targets within reach
> of those shafts and in any case, it's the
> combination of all four alignments which matters
> to make this a slam dunk case, not any shaft's
> alignment individually. The theological
> significance of Sirius, Alnitak, and Kochab are
> well described, no need for me to rehash all this.
> The alignment of the shafts, as Robert Bauval has
> explained, well corroborates the time of
> construction of the G.P. in the 25th century B.C.
> and argues against these being air shafts.
>
> The main target in ursa major was Alkaid the "hoof
> star" of the khepsh, the ox leg which we know from
> decan tables is a how the ancient Egyptians viewed
> the big dipper...mesekhtiu. I was in King Tut's
> chamber two weeks ago and you couldn't have a
> better view of this identity in the wall
> art....there is an adze lying right on top of an
> ox leg in front of the mummy of the king. So big
> dipper = ox leg = adze.
>
> For example, if you recreate the early morning sky
> in the early 27th century B.C. at the time of the
> heliacal rising of Sirius, you see that Alkaid
> ("Ak") is at azimuth about 4 degrees 35 minutes
> east of due north which is exactly where the two
> holes in the Serdab leaning against the north face
> point...needless to say the altitude is spot on as
> well....16 degrees 30 minutes. Meanwhile the north
> star was alpha-draconis, Thuban. This is all
> Robert Bauval's work, I am merely reminding you of
> what's long been done. Plus I just confirmed this
> again using my astrolabe and am staring at the
> alignment as I write this.

Thuban and the Descending Passages-The Key to Dating the Pyramids?

The problem with the 3,350BC date [see thread], among others for some, is that it does not coincide with theories of the dates of c. 2450BC provided for the "air shafts" of G1 aligning with various stars at this time. Considering all of the descending passages of the main pyramids attributed to the 4th Dynasty are agreed to have been polar passages, whether or not this was the function of G1's should not be in dispute. The only question is when it was meant to align with the pole star. And given it does not seem plausible both 3,350BC and 2,450BC are correct, the latter date not even possible for an alignment of Thuban with the descending passage, the question we are ultimately lead to is were in fact the air shafts designed to line up with stars in 2450BC if at all? As sacrilegious as it may be to some, I suggest no, they were not.

The QC air shafts were closed off at the chamber ends as well as both terminating approximately 20ft from the outside of the pyramid. Both continue at some distance then make a significant bends upwards. Both shafts are blocked by a series of doors.

The northern KC air shaft makes several zig-zagging bends at various intervals along its 235ft and the southern KC makes two bends. Both exit the exterior of G1 though we have no way of knowing whether they exited the casing stones or not.

We are so used to seeing diagrams of the G1 interior that depict the shafts in a straight line, like so: 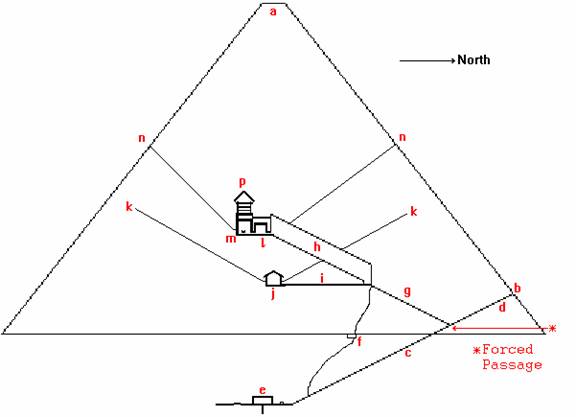 we take it for granted the possibility the shafts align straight to the stars when in reality this is not the case.

The QC has closed entrance and exits for both of its shafts, makes bends, and each shaft is blocked by at least one door if not two (or more)- hardly the stuff of "star shafts" either literally or symbolically. And are we to assume if the pharaoh were buried in the KC he sometimes vacationed in the QC to use those shafts instead to go to different stars? And despite the fact, if we accept mainstream chronology, Khafre would have been present during the construction of G1 if not intimately privy to all of its innovations; star shafts among them, he nor Menkaure incorporated these features into their own pyramids? Regardless, on what planet do we accept viewing a star, either to actually see or shoot a soul at, whether it is at a certain date or not; is to be achieved through a wall, around several bends, through doors, and then through 20+ft of the exterior of the building? Not happening. And the KC is no better as the northern shaft has no less than four bends zigzagging to and fro and the southern shaft has two with a varying shaft size and shape along its length.

The idea the G1 shafts were stellar aligned is nothing new and has been bandied about for several decades; long before the likes of Bauval and Spence. The inherent difficulties of this theory as I have noted above are often conveniently dismissed as “irrelevant” with the idea they did not actually have to make sense as they were merely “magical” in nature and not meant to serve a practical purpose either physically or symbolically. Any engineer who looks at these shafts would agree they are a technological marvel unto themselves and one of the most daunting architectural aspects of building G1 and yet them actually functioning in any logical way to serve the purpose ascribed to them is “irrelevant”? If this is the case then it goes without saying they would truly be “magical” indeed.

There will be those that disagree. There will be charts and graphs and all else in between offered to show how these shafts could have lined up with any number of stars at any given time and yet none will trump the physical evidence that clearly contradicts this novel idea.

Maybe instead of “magical shafts” that do nothing to actually serve the purpose ascribed to them, maybe the riddle of when G1 and the other great pyramids were built should be taken from a different, much simpler and more practical approach. We know these pyramids were aligned to the cardinal points. We know their descending passages were polar passages just as we know Thuban was the pole star at this time. We know that numerous structures, including these very same pyramids, throughout AE history were aligned to the pole star regardless of the pole star of the time. While the shafts of G1 resemble absolutely nothing one would expect of a star shaft, the descending passages of the great pyramids clearly do, and if so would have been made to view Thuban, the pole star of the time, which could only have been, according to astronomer Richard Proctor, sometime around 3350BC.