Mysteries :  The Official GrahamHancock.com forums
For serious discussion of the controversies, approaches and enigmas surrounding the origins and development of the human species and of human civilization. (NB: for more ‘out there’ posts we point you in the direction of the ‘Paranormal & Supernatural’ Message Board).
Welcome! Log In• Register
Go to: Forum Home•Board•New Topic•Search
Re: Equinoctial Pyramid Alignment
Author: Thanos5150 ()
Date: February 01, 2017 01:12AM
Origyptian Wrote:
-------------------------------------------------------
> If they are, then it's not clear, Thanos, how are
> you measuring which direction those corners are
> pointing.

I'm not "measuring" anything. It is common knowledge Mesopotamians oriented buildings to the cardinal points and is not exclusive to this one ziggurat. Their buildings were rectangular and oriented "cock-eyed" for whatever reason as shown in the photo. The Mesopotamians built over the same foundations again and again for centuries, more often than not enlarging the structure, so whatever errors there were in the original orientation were probably magnified over time. Even the ziggurat of Ur as seen above was refurbished in the '80's by Saddam Hussein.

Assuming the drawing below is correct, it is interesting to note the 1st Dynasty stepped pyramid mastaba 3038 is also oriented the Mesopotamian way with the corners aligned to the cardinal points: 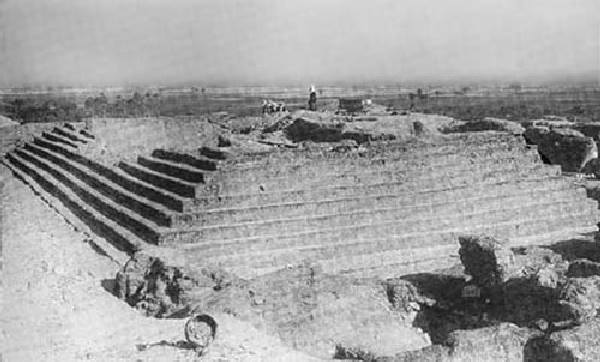