Mysteries :  The Official GrahamHancock.com forums
For serious discussion of the controversies, approaches and enigmas surrounding the origins and development of the human species and of human civilization. (NB: for more ‘out there’ posts we point you in the direction of the ‘Paranormal & Supernatural’ Message Board).
Welcome! Log In• Register
Go to: Forum Home•Board•New Topic•Search
Re: Pyramid Construction
Author: Thanos5150 ()
Date: March 28, 2018 08:41PM
I was half way through a response and one of my dogs who likes to sleep under my desk bumped my computer power cable and my computer shut off. Grrr.

We don't know what the mastaba was built into exactly as this in and of itself is speculation. To test the theory as it applies to Saqqara first I have to ask is it even possible which it is. Until I go there and start taking it apart I have to leave it at that.

> As I said, the fact that some pyramids are
> still standing relatively intact might be an
> indication that they were NOT of the "core tower"
> design. At least not like Meidum with its failed
> outer skin(s).

This is a reasonable concern and the fact is G1 and G2 would be some kind of variation to this theme as they were built incorporating bedrock formations which we know began as courses. But as I said, G3 and every other non-ruined exposed large pyrmaid shows some form of tower/stepped core and G1 it has been argued by some was built around a stepped core which the gravimetric scan gives further credence to this.

> Again, you're exrapolating from Meidum to the
> satellite and haven't shown that the upper walls
> of the satellite extend down into the step such
> that the step is a separate skin added onto a
> central core tower. Otherwise, that upper
> structure might simply be the middle step of a
> three step pyramid, the blocks of the top step
> being severely eroded and/or pilfered.

We can clearly see a tower core in G1b (middle). There is no way if built in horizontal rows that what is left over would be a nice tidy tower core. To compare this to the pyramid to the right it seems quite clear to me the other "steps" were later added around the core then the sloping layer of the true pyrmaid added to that. This is the progression of pyramid building that I see again and again. Meidum's tower core has "steps" as well which at the very least would have been the first foundational "step", the tower, then the top step or two. 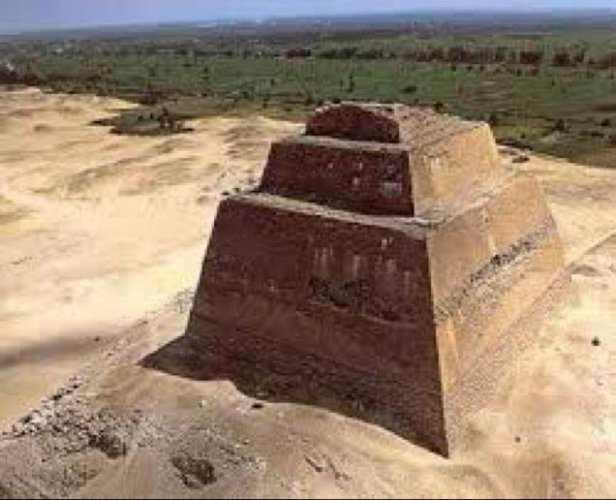 > As I said, the "core tower" model requires that
> the courses of an independent inner tower were
> first constructed and then subsequently added onto
> by applying one or more outer skins onto the
> existing inner tower structure. For that to be
> proven as fact it must first be verified that the
> outer walls of the inner tower structure continue
> down into the depths of the courses of the outer
> layer(s) that was added on afterwards such that
> the outer walls could slough off as we see at
> Meidum. Ergo "pit within the fruit", "skins of a
> square onion", etc.

I see. As I say above this seems quite clear.

> It's difficult to assess from the photo you posted
> since the viewpoint seems to indicate more than
> one "step" was revealed by that gash. It's not
> clear to me that what's exposed is a single
> vertical wall. What I'm seeing in the lower aspect
> of that gash is a step protruding out from the
> upper vertical wall. But maybe not. Do you know of
> any other photos that might reveal the contours of
> that exposed gash in comparative detail, perhaps
> from a slightly different viewpoint?

Basic eonsiderations on the construetion of pyramids in the Old
Kingdom

Again, the idea of G3 having a stepped core is not unique to me.

> I'm not as optimistic; I still see a lot of
> extrapolation and assumptions being made; it's not
> all based on direct definitive observations of the
> physical evidence in each pyramid.

What we can directly observe is that the outer pyramid layer was added to a stepped core. Optimism is not required, just eyeballs. All I have added to this fact is the idea that a tower was built first, which like Medium also has steps, and that any lower levels of steps were added after to facilitate the structural integrity and construction of the true pyramid outer layer.

> Sorry to belabor the point, but the G3 gash seems
> ambiguous (to me at least so far) and could be
> showing a couple of inner steps rather than a
> single vertical core. In that case, the outer
> pyramid skin might have been added onto the step
> format as a final stage of contemporaneous
> (original) construction and not necessarily by an
> adaption (or even adoption) culture.

As I have argued before, I do not agree with this and suggest there was an original core structure at G3 that was later converted to a pyramid.