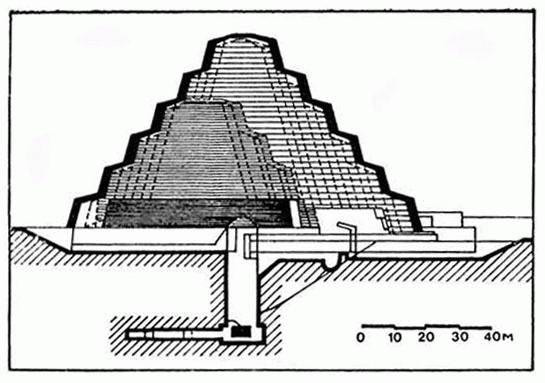 > Looking at this model, if you remove the dotted
> accretion layer lines from above the mastaba
> within the first pyrmaid phase it is easy to see a
> structure eerily similar to what is found at
> Meidum. I assume this model was made by Lauer, but
> looking at the models made there are assumptions
> made based on the accretion layer model, yet at
> the center of these is a tower in which the layers
> are placed against. How are we to know the mastaba
> was not raised as tall as it practically could be,
> a tower, then the steps added around the structure
> like Meidum? Has it ever been verified the first
> pyrmaid was not actually a tower or is this just
> assumed? And these steps don't exactly inspire
> structural confidence that it was actually built
> step upon step as it is clearly separated from the
> layer behind it in some places.../images/pyr05.gif[/img]

I hear you, but that's speculation, not physical evidence of the core tower principle. If that mastaba was first built into its own step pyramid, that still doesn't provide for a central "core tower". As I said, the fact that some pyramids are still standing relatively intact might be an indication that they were NOT of the "core tower" design. At least not like Meidum with its failed outer skin(s).


> > That satellite strikes me as a two or
> > three step pyramid but not a core tower structure,
> > and the other satellites show less hint of a core
> > tower design, despite their state of disrepair.
>
>
> I see a tower with a step built around it. Meidum bears this out...

Again, you're exrapolating from Meidum to the satellite and haven't shown that the upper walls of the satellite extend down into the step such that the step is a separate skin added onto a central core tower. Otherwise, that upper structure might simply be the middle step of a three step pyramid, the blocks of the top step being severely eroded and/or pilfered.


>
> > A central core tower requires a 'seed within the
> > fruit' perimeter which have not been identifed in
> > all OK pyramids (afaik).
>
> Please clarify.

As I said, the "core tower" model requires that the courses of an independent inner tower were first constructed and then subsequently added onto by applying one or more outer skins onto the existing inner tower structure. For that to be proven as fact it must first be verified that the outer walls of the inner tower structure continue down into the depths of the courses of the outer layer(s) that was added on afterwards such that the outer walls could slough off as we see at Meidum. Ergo "pit within the fruit", "skins of a square onion", etc.


> > You say that all of the major pyramids with the
> > internals sufficiently exposed show a central core
> > tower design.
> > I think it's interesting that not
> > all OK pyramids' outer skins have collapsed, so
> > perhaps the remaining pyramids that have not
> > collapsed or degraded to reveal such internal core
> > tower construction are still standing relatively
> > intact because the builders opted
> > for a strictly horizontal, and not core tower,
> > design for those pyramids?
>
> Possible, however, it does in fact appear G3 was
> built around a tower core. I think it is more
> likely the pyramids of Dahshur and Giza are just
> better made. If the Arabs didn't make the gash we
> wouldn't know what the core was of G3.

It's difficult to assess from the photo you posted since the viewpoint seems to indicate more than one "step" was revealed by that gash. It's not clear to me that what's exposed is a single vertical wall. What I'm seeing in the lower aspect of that gash is a step protruding out from the upper vertical wall. But maybe not. Do you know of any other photos that might reveal the contours of that exposed gash in comparative detail, perhaps from a slightly different viewpoint?


> > And to be clear, I have no vested interest in
> > whether any or all of them have the core tower
> > design. In fact, such a design better supports
> > adaption which I do strongly support, based on the
> > physical evidence. It's just that I don't see the
> > data as compelling for the core tower design being
> > as widespread as you're suggesting.
>
> Whether one wants to call them "stepped cores" or
> "tower cores", as I have shown in pictures, and
> Rigano verifies, what we have is every pyramid
> that is exposed and not a pile of rubble has a
> tower/stepped core.

I'm not as optimistic; I still see a lot of extrapolation and assumptions being made; it's not all based on direct definitive observations of the physical evidence in each pyramid.


> > But assuming for the moment that most, if not all,
> > of them do indeed have the core tower feature,
> > what do you make of that? What are the
> > implications to you if that were true?
>
> As I have argued it raises the possibility some of
> these cores were made as stand alone structures
> and later converted to pyramids. Maybe many were
> originally made this way and later converted. The
> core at Meidum says to me it was made that way as
> a finished product and at some point later
> converted to a pyramid. This is obviously the best
> example. Petrie believed the pyramid layer of G3
> was built over a pre-existing structure, which
> appears to be a tower core, that I have tried to
> bolster this case. The pyramids of Egypt aren't
> just building shapes, they are an ideology which
> at some point it is clear this ideology changed
> from one to the other. Maybe they first started
> building towers which when this ideology changed
> they converted them to pyramids and built new ones
> around this model.

Sorry to belabor the point, but the G3 gash seems ambiguous (to me at least so far) and could be showing a couple of inner steps rather than a single vertical core. In that case, the outer pyramid skin might have been added onto the step format as a final stage of contemporaneous (original) construction and not necessarily by an adaption (or even adoption) culture. In that regard, I think it's possible that Meidum either was a prototype experiment that failed, or that it was originally intended to be a tower structure but a more techincally naive adaption culture came along later and tried to turn it into a true pyramid, and obviously failed. I also think it's possible that the Step 'mid may be an incomplete project, or perhaps was a prototype of what was then a new "step" design that might never have been intended to be a true pyramid with flat outer faces.

In any case, from a structural engineering standoint, the key to making Meidum retain a true pyramid structure would have been to rework the surface of the inner core tower to create recesses in the outerwalls that could receive blocks from the subsequently applied outers skin as a method to interlock that outerskin with the tower in order to create structural stability. Any structural engineer who knows about mudslides and the general principle of coefficient of friction and slippage knows the importance of anchoring an outer structure to the inner substructure. Those rough intermittent horizontal bands on Meidum might have been a naive attempt by later engineers to create anchors for the E3 and E3 layers, but that obviously wasn't sufficient to maintain the integrity of the structure.