You did. A photo of the gash: HERE. See Rigano, again, The Stepped Core Within p.2-7. See table 1 p4 which he has verified the "stepped" cores of the 4th-6th Dynasties. Medium is referred to often as a "stepped core" which I do not think is necessarily apt and prefer "tower core" in which I believe the steps seen in other pyramids were added after the tower core was laid first. Regardless, "tower" or "stepped" core, take your pick.

> Bonnie Sampsell writes that Lepsius, and by
> association Borchardt, were wrong about the broad
> application of accretion and that many OK pyramids
> were built strictly in horizontal layers as their
> final design with no indication of an inner
> perimeter that would define a central tower.

I have shown pyramid after pyramid with tower ("stepped" if you prefer) core that shows this is clearly not the case. Again, refer to Rigano table 1. The only ones left are either "ruined" or "unknown".

> She
> cites that M&R didn’t find any evidence of
> accretion in many OK stone pyramids including the
> 3 Gizamids as well as Red, Userkaf, and Sahure.
> According to Sampsell:
>
>

Italians Vito Maragioglio and Celeste
> Rinaldi studied the architecture of many Old
> Kingdom pyramids in great detail. They paid
> particular attention to the issue of accretion
> layers. They found that for the most part the
> major pyramids at Dahshur and Giza were too well
> preserved to reveal much about their interior
> structure, but in every place where they could
> examine portions of the nucleus of these pyramids
> they saw only blocks laid horizontally rather than
> on a slant. In fact, they found no evidence for
> any internal faces that could be associated with
> accretion layers in any Dynasty IV or V
> pyramid.
> [www.catchpenny.org]


Accretion layers are vertical rows of blocks added in layers. Like so:

This changed to adding horizontal rows, a "horizontal accretion layer" if you will, yet still around a tower core. Hence why when this layer has fallen and/or been removed time and again we are left with somthing like this: Or any number of pyramids I have posted pictures of the least of which the one I just posted from Saqqara from the 5th/6th Dynasty.

Miroslav Verner excavated the unfinished
> pyramid of Dynasty V king, Raneferef [Neferefre].
> Verner reported that this pyramid provides
> absolutely no evidence of building by accretion
> layers saying: “If the [accretion] theory was
> valid, then...it should have been possible to find
> -- as in cross section -- stone masonry arranged
> on all four sides in parallel layers. It would be
> as if an onion not circular, but square, had been
> sliced across horizontally.


I think you are confused. I have used Neferefre's pyramid as one of many examples of a tower core: 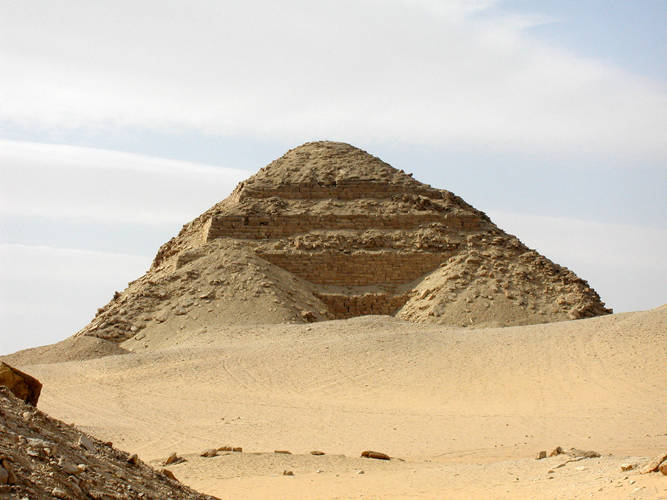 It makes no difference whether the outer pyramid layer was laid vertically as an accretion layer or horizontally in rows.

The reports of Maragioglio, Rinaldi, and
> Verner, taken in conjunction with personal
> observations made during several trip to Egypt,
> make me confident that the Dynasty IV pyramids at
> both Dahshur and Giza were constructed using the
> new method of horizontal courses rather than with
> inclined accretion layers.

> Where do you see a central tower as being ‘the
> only standard’ design in the OK pyramids?

This would be one of the reasons now wouldn't it? Whether the outer pyramid layer was added in vertical or horizontal rows there is still a tower core at its center.