Mysteries :  The Official GrahamHancock.com forums
For serious discussion of the controversies, approaches and enigmas surrounding the origins and development of the human species and of human civilization. (NB: for more ‘out there’ posts we point you in the direction of the ‘Paranormal & Supernatural’ Message Board).
Welcome! Log In• Register
Go to: Forum Home•Board•New Topic•Search
Re: Pyramid Construction
Author: Origyptian ()
Date: March 05, 2018 07:38PM
Steve Clayton Wrote [to cladking]:
-------------------------------------------------------
> ...
> Reexamining Ori's turn style (for lack of a better
> term) works better than I first imagined. It has 4
> cut groves. I have been concerned about knots, and
> the like, passing over an abrasive surface. If the
> ropes were attached to a larger wood or copper
> dowel, and re-intertwined after making a loop,
> then the dowel would take the brunt of the stress.
> The rope loops are smaller in size than the
> dowel's outer surface. No big knots.

Correct, the lighter regions within the grooves are cross-ridges and darker regions within the grooves represent recesses so that a ridge-recess pair serves to 'catch' the knots which effectively pulls the rope around the drive spindle which could be operated by a single worker. That knotted-rope model is a bit of artistic license since I'm not aware of any ancient graphic that shows such knotted rope. However, knots aren't necessary since the alternating ridges are likely sufficient to add enough grippage to drive the line even without knots, similar to how our own fingerprints are able to grab smooth surfaces: 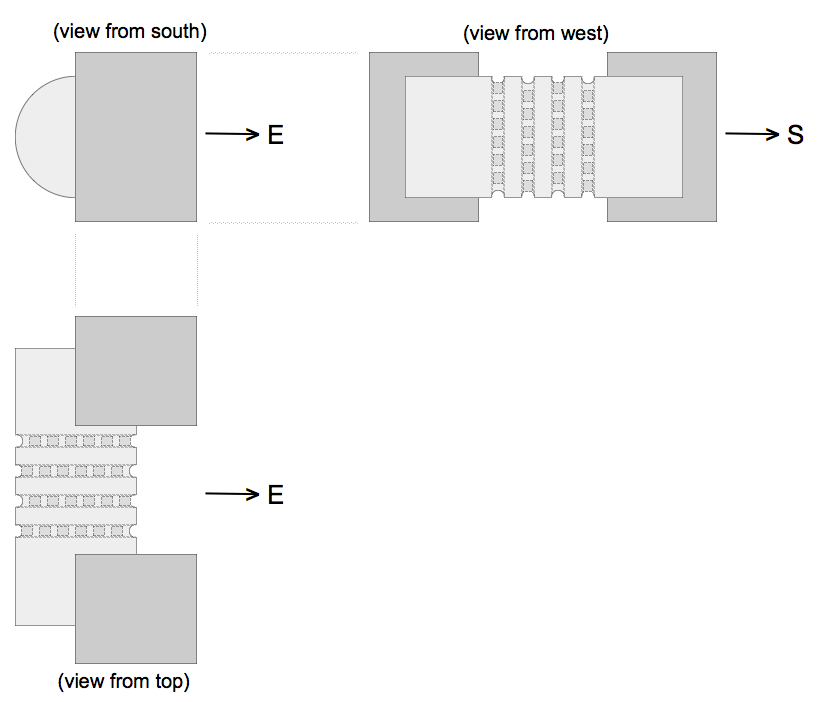 > I was running stress amounts for 2 and 2.5 inch
> ropes. 5.5" is to heavy for a small group of men
> to carry and replace. As the build increased they
> would have needed to switch to assembling 2 slings
> between each boat. Again, the ropes need to be
> carried. I don't see any tar. If it's more
> strength you desire, consider running the rope
> through a bath of hide glue. Hide glue can be
> diluted before application, and other soluble oils
> added for flexibility. It is a known fact, they
> had hide glue, as they used it to build their
> furniture. Additionally, treating the rope would
> impart water proofing. Hide glue has to be heated
> up, though after setting, it become water
> resistant. Guitar and violin manufactures still
> use hide glue today. I have worked with it.

A 2" rope of natural fiber can have more than a 13 ton capacity. Considering the shallow 4.6 degree incline of the causeway and the neutralization of the load due to the funicular system with the CoF of greased copper-to-copper interface, we determined that a single 2" rope can transport a load that's an order of magnitude heavier along that causeway. But we originally proposed TWO 2" ropes simply to provide redundancy, e.g., during any switch-over, planned maintenance, for safety purposes, etc.