Mysteries :  The Official GrahamHancock.com forums
For serious discussion of the controversies, approaches and enigmas surrounding the origins and development of the human species and of human civilization. (NB: for more ‘out there’ posts we point you in the direction of the ‘Paranormal & Supernatural’ Message Board).
Welcome! Log In• Register
Go to: Forum Home•Board•New Topic•Search
Re: Pyramid Construction
Author: Audrey ()
Date: March 03, 2018 07:07AM
cladking Wrote:
-------------------------------------------------------
> "Geysers" didn't lift any stones. Rather the
> water from a geyser named "atum" was used in a
> linear funicular to lift the stones.

So you're saying the water from geysers was channeled through canals to the causeway which then flowed uphill to the pyramid?

> A funicular does as much work as the weight of the
> water times the distance it falls times the
> efficiency of the system. Since a linear
> funicular is so simple it can operate with a near
> 100% efficiency. In other words it would take
> only about 50.5 tons of water to lift a 50 ton
> stone.
> Just as "uphill" requires a tremendous amount of
> work, "downhill" does a tremendous amount of work.
> Any water at 80' on the pyramid could lift nearly
> its weight in stones.

> > Funiculars do not answer the problem of the
> moving
> > the larger stones into place.
>
> To some extent I agree but I'm not prepared to
> toss the funicular out with the waste water.
> Funiculars can operate in tandem and with various
> types of assist. For the main part large stones
> would have been moved downhill into their final
> position after being raised a little higher than
> necessary.

You've got water going up then down then back up again. Sounds like water locks, not a funicular.
And how do you water proof the lower 200' so that your water locks don't empty as fast as you fill them with what, buckets?

Egyptologists say the causeways were enclosed. Why have enclosed funiculars? Doesn't make sense.

> > They had the
> > equipment to make extraordinary stone cuts but
> > used basic primitive ropes and timbers? This is
> a
> > contradiction not only in skill, but also in
> > method and equipment.
>
> The PT says they had water powered saws in the
> "Great Saw Palace". I don't know how they were
> designed.

Water jets. New technology for us. If they were cutting with water, they dam sure weren't using ropes and timbers. 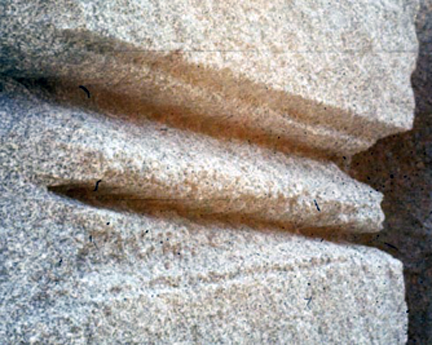 > They didn't have to have pulleys to use
> funiculars. They merely needed to redirect a rope
> about 70 degrees. There are numerous ways to do
> this with or without a pulley. The device they
> used was called a "dm-sceptre". I'd wager this
> was a simple pulley but it might have been a
> rounded greased stone for all I know.

So you're going to redirect a rope around a pole or stone? You should probably use stone because you've got 50 tons at the end of those...how many ropes?

Better be a round polished stone or your ropes will shred. If you've figured this much out, you're more than halfway to having a pulley. If they didn't have pulleys, you're saying they were smart enough to 'redirect' the ropes, but not smart enough to go one step further and come up with a pulley. And if they had pulleys, they weren't smart enough to make that small step to a wheel. Yet they engineered the relieving chambers, the grand gallery and passageways. What's wrong with that picture?

> A pulley is a little simpler than a wheel.

Then why didn't the AE have the wheel? That's the whole point isn't it?