Mysteries :  The Official GrahamHancock.com forums
For serious discussion of the controversies, approaches and enigmas surrounding the origins and development of the human species and of human civilization. (NB: for more ‘out there’ posts we point you in the direction of the ‘Paranormal & Supernatural’ Message Board).
Welcome! Log In• Register
Go to: Forum Home•Board•New Topic•Search
Re: More Sand
Author: Thanos5150 ()
Date: December 16, 2016 05:02PM
DUNE Wrote:
-------------------------------------------------------
> Now of course no one is or has suggested that the
> GG walls were in danger of cascading down into the
> lower ascending passage, im sure its firmly fixed
> into the surrounding superstructure, and as you
> say those guys new what they were doing.
>
> Therefore the only logical conclusion for the
> roof slabs being locked into place is for them to
> stay where they are, and as you said they new what
> they were doing, you also graciously admitted you
> have no idea why they chose this configuration, so
> may i make a suggestion for you to ponder on.
>
> In my previous post i suggested that there may be
> some sort of void over and above the roof line of
> the GG, now as these roof slabs are not pressing
> down on the slab directly below them , then it
> could be possible to lift each slab up
> individually from their position, or were they
> laid down at a later stage in the same fashion ,
> as there could have been some sort of pulley
> system operation from above the GG till late on in
> the construction.

Isn't it most likely the gabled ceiling of the GG was added after it served it's function? Meaning all that was originally there when it was functional was what is seen here up until the sidewalls hit the gable blocks. 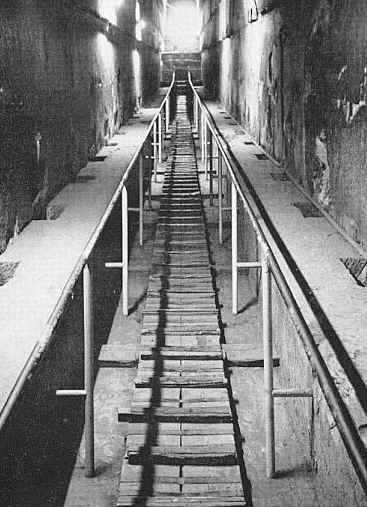