> There's no evidence that precludes the possibility
> that those galleries may have been used to house
> disassembled boats.

Previously, however, you questioned why they would not bury the Giza boats in one piece trying to cast doubt on the provenance of the boats and/or pits, yet now because they may have stored disassembled boats in maritime storage galleries to this somehow support your other doubt mongering question of "why bury the boats in a pit covered by blocks instead of an underground chamber"? These are boat graves, not storage galleries.

> The galleries
> were already breached and essentially picked clean
> by the time Tallet arrived. Tallet claimed those
> galleries likely served as a kind of
> long/short-term storage bins, but that's pure
> speculation.

No it is not "pure speculation". There are other examples of maritime storage galleries very similar to these found at harbors elsewhere along the Red Sea later which there is direct evidence of this being their purpose and everything about Wadi al-Jarf says it is no different.

> I know of no evidence found there
> that supports that contention.

All of the evidence support no other conclusion and apparently you are not listening to yourself.
First you say:

There's no evidence that precludes the possibility that those galleries may have been used to house disassembled boats.


So here you are arguing in support of these being storage galleries for boats based on your standard of proof that there is no evidence that precludes the possibility" of such.

Now regarding Tallet saying they were long/short terms storage galleries, which would include boats mind you, you characterize this as "pure speculation" (which obviously it is not) and now offer this higher standard of proof:

I know of no evidence found there that supports that contention.

Which does not end however as in the very next sentence you argue the exact opposite of what you just said against Tallet:

And after all, those galleries are located relatively close to the harbor where one would expect to find boats in
storage along with other things nautical.


You seem to be having quite an argument with yourself.

> I don't follow. The photos you posted of mass boat
> graves don't include any such recesses into
> bedrock.

They are pits dug into the ground lined and covered over with mud brick: 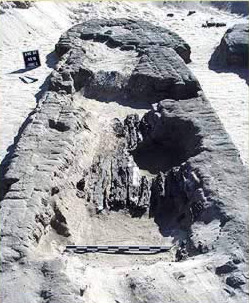 Boat graves are graves. Pits. Covered over. Not sure how else to explain it.

> Maybe I'm misunderstanding your point
> about that. From what I've seen so far, no other
> boat pit resembles the geometry and construction
> of G1's southern pits.

I assume because you did not respond to my previous post and are saying this you did not actually read it: HERE.

Refer to the part about the southern boat pits.