LA Waddell notwithstanding, the oldest suggested appearance of the double axe in Mesopotamia I can find for now is from Tell Arpachiyah near Nineveh which is a late Halaf site with an Ubaid presence. Probably about 5,500BC or so. 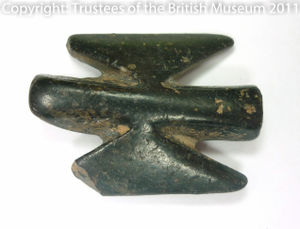 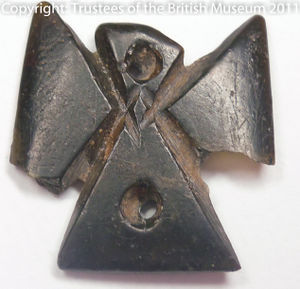 Very interesting site. I've spoken a little of the Halaf before, but they were a significant culture in their own right with a range from Mesopotamia, Anatolia, and the Levant, and the last of the Venus figure worshiping cultures. A piece of pottery from a Halaf site in Domuztepe in Turkey c. 5,500BC:

It depicts multiple multistory buildings. Domuztepe is a very important site and also notable for it burials, namely the "death pit".

But I digress...The double axe is found in proto-Elam as well. The most attested significant use of the double axe ("Labrys) is no doubt the Minoan culture of the 3rrd millennium which it was apparently very important with a relationship to female deities. In Egypt it is found at least as early as the 1st Dynasty. Djet:

I will have to spend some time with this, but the connection of the Mesopotamian double axe with the beginning of Dynastic Egypt no doubt is significant.