Mysteries :  The Official GrahamHancock.com forums
For serious discussion of the controversies, approaches and enigmas surrounding the origins and development of the human species and of human civilization. (NB: for more ‘out there’ posts we point you in the direction of the ‘Paranormal & Supernatural’ Message Board).
Welcome! Log In• Register
Go to: Forum Home•Board•New Topic•Search
Re: Khufu Cartouche
Author: Thanos5150 ()
Date: June 06, 2016 05:47AM
Hello Loveritas.

So why do we say it as fact then?

> Ossburn is of the opinion that Suphis II (Kafre)
> and Userkare were contemporaneous kings, one
> ruling from Memphis, and the other, from Abydos.

Does anyone but Osburn hold this opinion?

> Suphis and Noh-Suphis were, according to Osburn,
> co-regents, and brothers, each having a different
> cartouche. Vyse, knowingly, or not, discovered
> (giving him the benefit of the doubt) both
> cartouches in the Great Pyramid. Not the Khufu
> cartouche in one location and the KK in another.

According to Petrie I believe writing in 1883 (Pyramid Odyssey, Fix):

Another name is found on the blocks in the Pyramid, side by side with those bearing the name of Khufu. This other name is the same as that of Khufu, with the prefix of two hieroglyphs, a jug and a ram and it is variously rendered Khnumu-Khufu, Nh-Shufu, and Shu-Shufu. The most destructive theory about this king is that he is identical with Khufu, and that the ram is merely a symbol of the god Shu, and put as the determinative in this place of the first syllable of the name. But against this hypothesis it must be observed (1) that the pronunciation was Khufu, and not Shufu, in the early times; (2) that the first hieroglyph, the jug, is thus unexplained; and (3) that there is no similar prefix of a determinative to a king's name, in any other instance out of the hundreds of names, and thousands of variants, known....

The only great royal inscription (of Khufu) is on the rocks of Sinai. There are two tablets: one with the name and titles of Khufu, the other with the king smiting an enemy, and the name Khnum-khufu The name is found in five places The two names being placed in succession in one inscription cannot be mere chance variants of the same. Either they must be two distinct and independent names of one king, or else two separate kings. If they were separate kings, Khnum-khuf must have been the most important.


> However, the only effigy of Khufu was found, not
> at Giza, but Abydos. 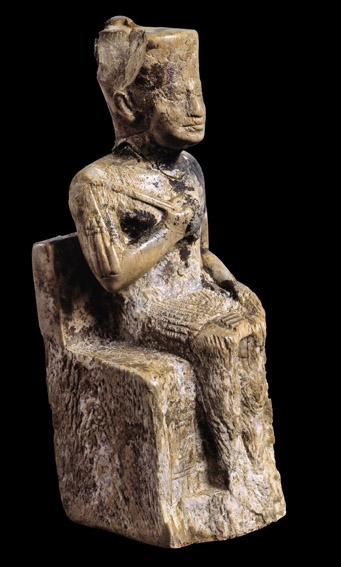 On the lower left is supposedly written his Horus name (serekh), but no carouche.

Here is a statue found in the 4th Dynasty Giza mastaba of Seneb and his wife: 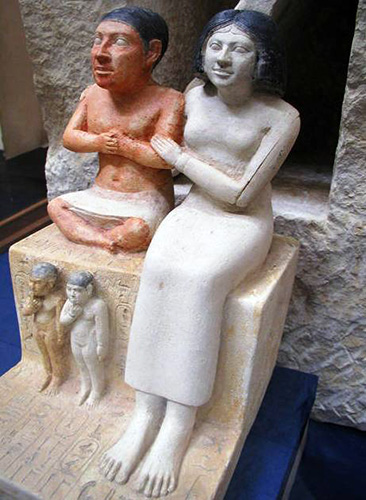 Originally it was thought to belong to the 5th/6th Dynasty but according to Wikipedia/Seneb has since been definitively dated to the reign of Djedefre (Radjedef). The two children depicted in the statute are named Radjedef (Djedefre) on the left and Khufu on the right:

As we can see Khufu is clearly depicted as a female with the customary white skin and female genitalia. To look at the Khufu statue again:

A man or a woman? The statue of Seneb is very curious. To quote myself from HERE:

Anyhoo, the lines in the circle are obviously not meant to represent the "kh" in "Khufu" and could not be one and the same as a sieve despite appearances. No other pharaoh required this not even KHafre. And also, the Khufu cartouche has many variations of lines and no lines all of which spell the same thing. This is highlighted on Merykhufu's tomb which depicts both empty circle and a 3 line circle. For me, I can only conclude that lines in the RA disk, regardless of how many, mean something different than no lines and a dot or nothing. Considering Khufu is the only pharaoh in the history of Egypt to have his RA disk not only depicted with lines, but depicted with something other than the customary no lines or dot there is obviously something unique about Khufu and the meaning of the lined RA disk.


To paraphrase the rest, the lines of the sieve (RA circle) have been said to represent the placenta which given Khufu is the only pharaoh to have these lines in their RA disk I have raised the possibility this may denote Khufu was in fact a woman of whom as had happened in earlier Dynasties were known to have been co-regents.

Just a thought. So maybe these cartouches refer to a Mr and Mrs Smith....

Regardless, the statuette attributed to Khufu is wearing the crown/headdress of the god Amun, akin to the Red Crown of Upper (southern Egypt) which though Atum dates to most likely the beginnings of Dynastic Egypt and was popular during the OK, this style of crown as far as I can tell was a later convention appearing in the MK/NK:

Regardless of who it represents, or their gender, all things considered I think it is very unlikely, as does Hawass apparently, this statue dates to OK and is more likely to be from later funerary cults possibly as late as the 26th Dynasty.

I would also note from the thread Mastabas of Giza-Reference and Commentary:

There are dozens and dozens of Khufu cartouches to be found in many of the [Giza] mastabas which in context do not appear to be referring to Khufu the pharaoh. For someone with the time and interest it would be well worth sorting this out as it would seem to speak directly to what the cartouche really meant and who or what it was actually referring to.


I wasn't thinking about it at the time but I do not recall seeing too many "Khnum Khuf" if any though I honestly do not remember. It would be interesting to comb through these and see if there are.

> In maintaining consistency, if Osburn is correct,
> one could expect to find the cartouche of both
> Kafre and Userkare in G2 or its satellite temples.
> Is such the case?

> One could also ask oneself the question, why did
> the quarrymen daub one block with the Khufu
> cartouche, and another with the KK cartouche? It
> would seem likely that, because the destination
> was the same, both cartouches were understood as
> belonging to one entity and were interchangeable.

The naming scheme for pharaohs is complicated, but why would some quarrymen, or folk like Merer as I note, prefer one name over another which again in the case of Merer in the same set of documents?

> What I find interesting is the fact that the Khufu
> character doesn't have a Re inclusion in his name,
> considering the preference for Re to be included
> in his family's names and many generations hence.
> His preference was for Khnum which indicates quite
> a difference in his divination (God/King).

Many do not have the RA inclusion.

> Doesn't explain the fact of both cartouches being
> in G1 though.

If anyone knows of any evidence as to why these names are now considered to be one and the same and not co-regents as was accepted by many until at least the early 20th century please provide it.