Mysteries :  The Official GrahamHancock.com forums
For serious discussion of the controversies, approaches and enigmas surrounding the origins and development of the human species and of human civilization. (NB: for more ‘out there’ posts we point you in the direction of the ‘Paranormal & Supernatural’ Message Board).
Welcome! Log In• Register
Go to: Forum Home•Board•New Topic•Search
The Thunder Stone - from 1,500 down to 400 tons
Author: Jiri Mruzek ()
Date: May 10, 2016 09:03PM
RuneSpider posted on Oct, 23 2011 @ 08:28 AM link to the whole discusssion at AboveTopSecret.com

"The heaviest stone moved by man, starting out at 2000 tonnes and was carved down to 1500 while being moved. Now down to 1250 tonnes as it serves as the pedestal for the statue of Peter The great called the Bronze Horseman.
Pulled from marshy ground in 1768 by Russian workers under the command of a Greek Lieutenant -Colonel in the Russian army moved the stone 150 meters a day.
It took nearly nine months to move the massive stone the 6 km. to the Gulf of Finland.

To this day it remains the largest stone moved by man, with the 6 km it was moved, done completely with man power. No machinery or animal labour was used to move the stone. "

The above quote is representative of what one finds when doing an internet search on the subject. It shows a lack of critical thinking, and willingness to cut & paste untruths as long as they conform to the agenda of belittling ancient achievements. Fortunately, the same search provides visual documentation which conflicts with such buncombe claims head on.

The reader is invited to inspect a sequence of images which shows the granite stone in progressive stages of the work. First, the drawing below shows that the stone was being reduced in size before ever being moved.
The initial measurements of the stone in meters, 14 x 7 x 9, would translate to about 2,400 - 2,500 tons in weight. However, since the stone is not rectangular but rounded - the starting weight is less - ascribing a value of 1,800 tons to it seems fair although sources generally cite 1,500 tons. 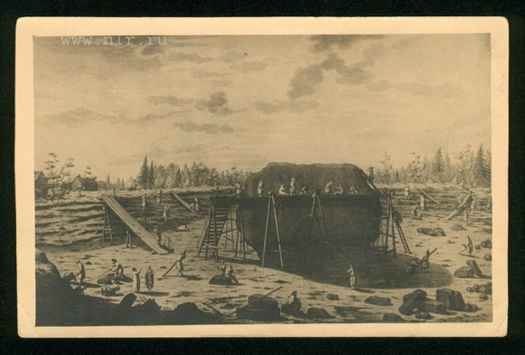 The picture below is dated January 20th, 1770. In my opinion, it must have been the day when the stone was set in motion. That would explain the alleged presence of Catherine II, the empress, and the throng of onlookers.
It is evident that the shape of the stone has changed a lot by then -starting from the base on the left, which instead of protruding outwards, now slopes inwards. Its width on top is now only around four meters instead of seven, and the base itself now looks no more than five meters wide, but let's say that it is six meters wide. Even so, forty percent, or so, of its bulk must be gone by now (so it must be down to 1,200 - 1,300 tons) - and still, workers hammer away at it. 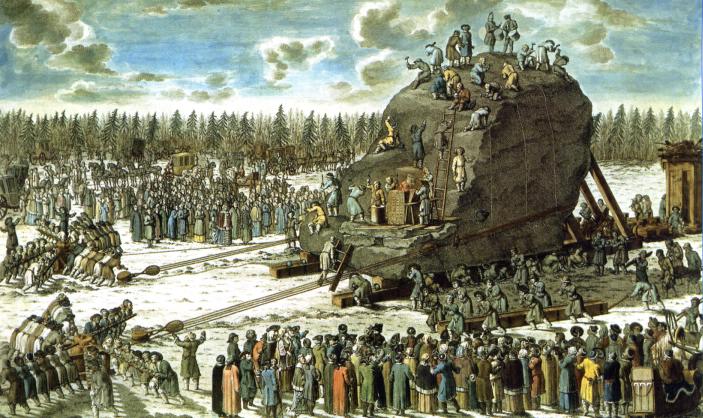 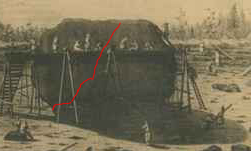 The red line roughly approximates the change
which had occurred prior to any attempts to move the stone; however, it doesn't show
the whittling down done on the sides.

Below: a larger, black & white version of the same image provides good view of some important details. The stone, loaded on a metal sledge, rolled on ball-bearings - a century before the official date of their invention - pairs of tracked iron rails with six inch brass balls in the tunnel formed between the top and bottom rails. The stone was pulled by two capstans, each capstan in tandem with a pulley, each capstan turned by a team of thirty men. 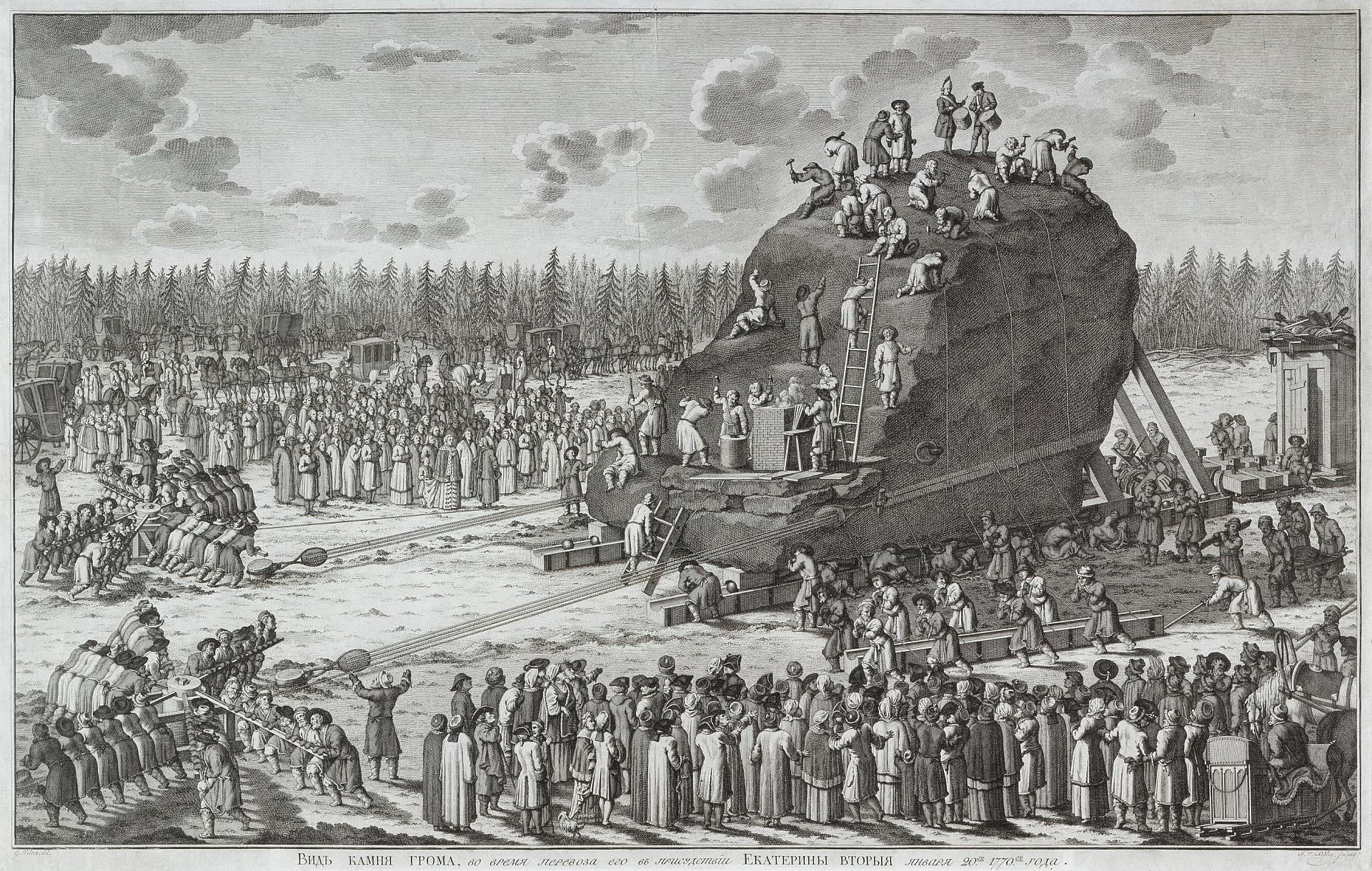 A question arises - how much more weight did the stone lose in the following days, before it travelled any significant distance? This is an important question because the stone weighs less than five-hundred tons presently.
I suspect that the stone hardly budged from its place on that first day, if at all; the nobility thought that they saw it move an inch and went back to Petersburg happily, and then its transport didn't really get underway until further substantial weight reduction.
Was it cut down to less than 600 tons while still in situ? It would make sense to concentrate on making the stone lighter first; it could be moved along much faster at 600 tons than at double the weight. That's how Falconet had first proposed the project; after the empress went back to Petersburg, he might have done just that. If I were in his shoes, for the sake of efficiency, that's what I would do, and argue with the empress later.

A higher resolution specimen of the image below is needed - what is that mysterious big square on the far side of the stone? This way, seen from afar, the stone reminds me of a merchant ship in drydock. The big square cannot be part of the Thunder Stone because the preceding image shows how the stone sloped a lot already when getting underway.
It seems to me that the stone loaded upon the barge closely does resemble its final form; the higher front protrudes forward as it does today, and the stone slopes down towards the rear. Therefore, its weight must also be nearer the final tally.

This photo of the Thunder Stone has a man standing close by it, thus providing a reference. If he were a two meters tall basketball player and stood up straight - he'd take up one-third of the stone's height. It seems realistic to estimate that the stone is no more than six meters tall; it lost one-third of its original height.
Of course, if our man turned out average in height - a more likely case - the stone's size would diminish corespondingly. The stone then appears approximately twelve meters long at the base, and just over five meters tall. 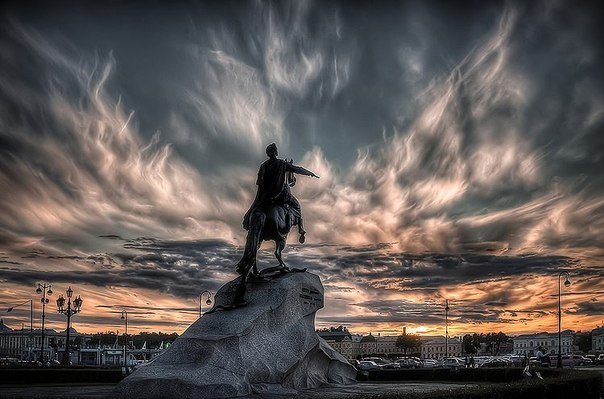 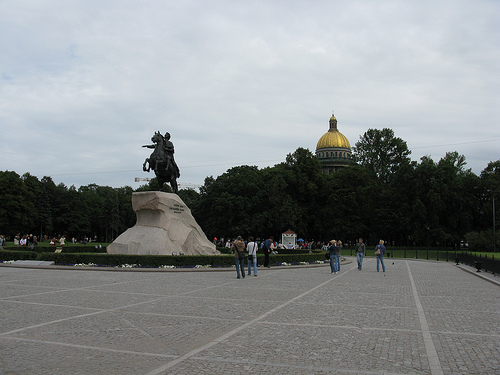 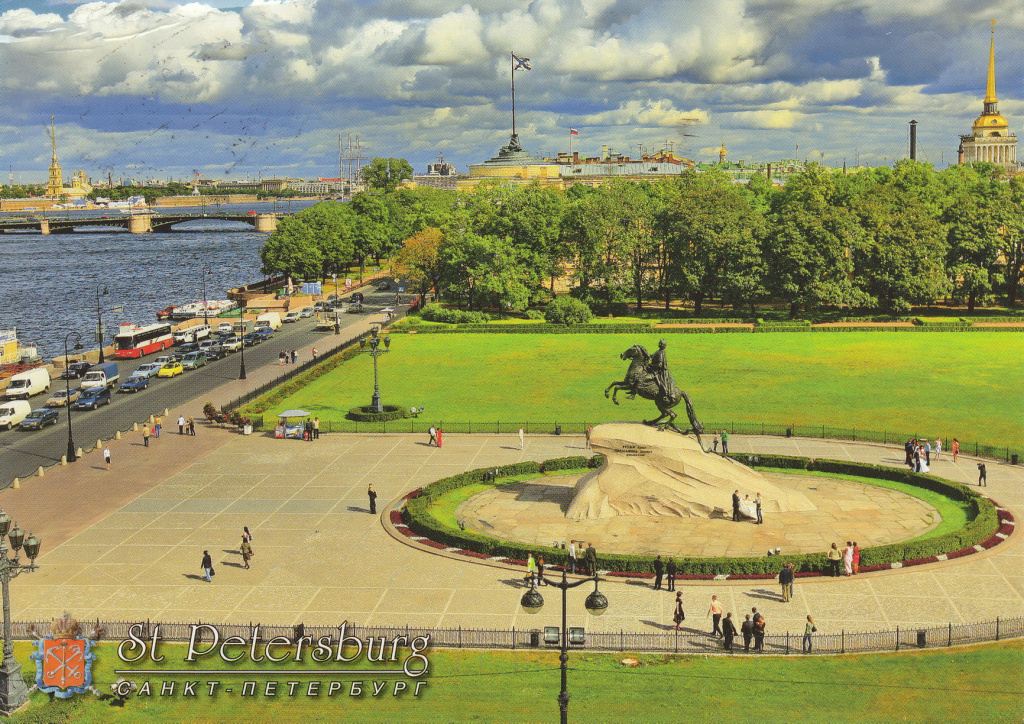 Which is bigger - the megalith above or the one below? 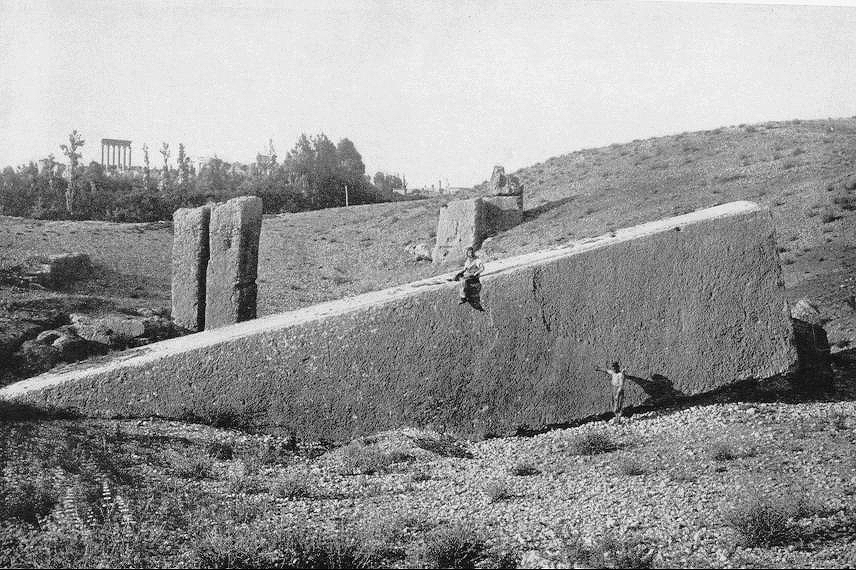 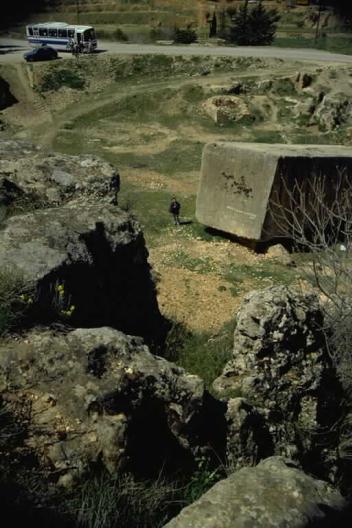 This combination of the two blocks on one canvas gives impression that the Stone of the Pregnant Woman in Baalbek looms close to treble the size of the finished Thunder Stone.

It's claimed that at 1,500 metric tons the Thunder Stone is the heaviest stone ever moved by human power alone; and that is supposed to be a proof that no advanced technology was needed for the transport of colossal stones in the long gone ages, such as the Baalbek Trilithon or the stones at Sacsayhuaman.
However, unlike Russians in the second half of the 18th century, Romans and their predecessors supposedly had no ball-bearings, iron rails, and metal sledges. Those things are all benefits of technology. As much as one has to admire Falconet's engineering achievement, what he had proved was that technology of the late 18th century was capable of transporting large megalith. In fact, I have no doubts that using the same process, we could transport even much larger megaliths, weighing thousands of tons, by human power alone.
Just scale everything up; use more steel tracks to distribute the weight, and put megaliths on large steel platforms riding on steel wheels underneath. Hook it up to a system of capstans and pulleys for mechanical advantage, and then, using just our human power "alone", we could definitely move the whole thing along. After all, it's documented that a single strongman can pull a Boeing 747 with his teeth, under the right conditions...
In my article on the Baalbek Trilithon, I laid out some historical facts indicating that Romans could transport only stone blocks weighing less than 325 tons. So, the Trilithon blocks had to be moved in much earlier times and by technology superior to that of Rome. Forget putting the Trilithon blocks, or the Thunder Stone, on wooden sledges and towing them over uneven and unpaved terrain.