Mysteries :  The Official GrahamHancock.com forums
For serious discussion of the controversies, approaches and enigmas surrounding the origins and development of the human species and of human civilization. (NB: for more ‘out there’ posts we point you in the direction of the ‘Paranormal & Supernatural’ Message Board).
Welcome! Log In• Register
Go to: Forum Home•Board•New Topic•Search
Re: Vessel manufacture
Author: Thanos5150 ()
Date: May 12, 2016 06:10AM
Hi Corp.

Lololo. Same here. I am afraid unlike you I may be irredeemable, however. Maybe we can make the journey together.

> No that does not follow!
>
> If it were stages in the process then the artefact
> / pot being made would be consistent.

Not so sure about that. Its not meant to depict an assembly line.

> Here is a wild guess but I submit far more
> acceptable and reasonable than the conjecture of
> Emery which you have swallowed wholesale because
> it fits your preconcieved paradigm.

"Swallowed wholesale"? Do you think this is a fair statement? You should get Archaic Egypt by Emery. Very interesting.

> From the left. The guy is using some primitive
> grinding contraption (completely inappropriate for
> stone esp hard stone boring) to grind something.
> The convex holding pot is sunken into the ground
> in order to render it firm and stable given the
> unwieldy nature of the primitive grinder. The
> convex shape helps a solid grip in the ground
>
> Then he takes the pot out and it is transferred to
> a much larger convex concave pot for
> storage. Then some of the crushed stuff is taken
> out and put into a shallow wide pot for further
> finer grinding when required for use.
>
> Such is transferred to another different pot
> suitable for mixing and clearly water or oil is
> added to the later pot and it is held on an angle
> as it creates froth.
>
> Beer! 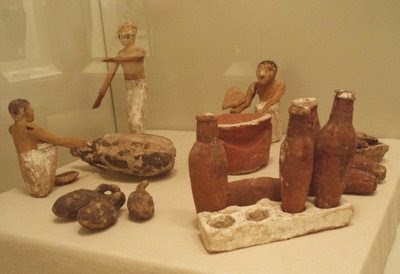 These are real by the way. They really liked to make models of these kinds of things, some are quite elaborate.

> You mean that what they really are trying to
> depict on the right is something like this:

Probably so. I have never seen a vase that looks like the one depicted. Must just be a children's fairytale then.

> Still couldn't possibly produce such a pot with
> that primitive contraption and neither would it
> work at all on the wide shallow pot on the left.

Yet there it is.

> They are saying the finished product needs a stir
> before serving to get the settled dregs off the
> bottom.
>
>
> You know it is true! ;-)

We agree the AE made at least "some" of their own stoneware in their 3500+yr history. Like these (MK, 18th Dynasty):

How do you think the AE made all of the stuff not attributed to archaic Dynastic times? Do you think it was any different than what they do today which is eerily similar of what is depicted in AE reliefs?