Mysteries :  The Official GrahamHancock.com forums
For serious discussion of the controversies, approaches and enigmas surrounding the origins and development of the human species and of human civilization. (NB: for more ‘out there’ posts we point you in the direction of the ‘Paranormal & Supernatural’ Message Board).
Welcome! Log In• Register
Go to: Forum Home•Board•New Topic•Search
Re: Were the Egyptian Pyramids used as Tombs?
Author: Thanos5150 ()
Date: February 11, 2016 05:20AM
Martin Stower Wrote:
-------------------------------------------------------
> Functional equivalent of the mastaba chapel would
> presumably be the (mortuary) temple and it’s
> unfortunate for our knowledge of the case that
> these were so heavily plundered, but certainly in
> the case of Khufu’s there are fragmentary
> remains of the reliefs it once contained.

These were not found in situ, but at Lisht. 2 groups of fragments which the first refers to Khufu often and is not believed to come from the mortuary temple, but rather the Valley temple which has never been found. "This assumption is based on parallels of their subjects found in later monuments". The second group makes no mention of Khufu at all and again it is only assumed they came from the mortuary temple. The fact is no one knows where these fragments came from or when they were even made, though until proven otherwise I am certainly willing to accept they are at least from the 4th Dynasty.

There is enough of the G2 and G3 mortuary and valley temples, regardless of plundering, to make it abundantly clear they were never covered in reliefs. Nor the Sphinx temple for that matter. This is why until the excavation of the Sneferu's Bent pyramid valley temple Egyptologists were of the mind adorning pyramid complex temples was not even practiced in the 4th Dynasty. Bent does not have a "mortuary temple" per se', but rather a small unadorned relatively pathetic cult chapel that abuts it which seems a contradiction of workmanship and scale compared to the pyramid itself. The Red pyramid mortuary temple is virtually non-existent and was of such a limited scope and craftsmanship Egyptologists explain this by suggesting it was "built in a hurry" or never even completed. There is no evidence of a causeway leading from the mortuary temple to the valley temple, suggesting it was never built, and it is questionable whether it ever had a valley temple either. There is a small unadorned pedestrian chapel at Meidum but no evidence of any valley temple.

So, in reality what you have are the massive unadorned temples at Giza and the small and poorly constructed adorned temples attributed to Sneferu who built at least 3 if not 5 pyramids in all. Immediately after Giza, at the very beginning of the 5th Dynasty, we find lavishly adorned funerary temples littered with reliefs which now also suddenly incorporate beautifully carved and designed round granite columns prior to which, except at Saqqara, were stark and square. Sahure who ruled barely 10yrs after Menkaure: 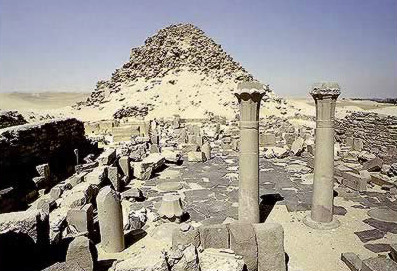 Is there really a direct connection between the temples at Giza and those that came directly before and after? I don't think so. As far as the Khufu reliefs are concerned, if all the other temples at Giza are any indication one could assume they were part of a pedestrian valley temple added after the fact by Khufu akin to what is found at Dahshur.

I would also note that the fragments of reliefs found at Dashur and those attributed to Khufu are largely of the kings participation in the Sed Festival which is not a funerary rite, but rather a rejuvenation and commemoration ceremony held after 30yrs of rule repeated every 3yrs after. One has to wonder if the temple was built in honor of this achievement while living rather than to remember the accomplishment after death. Instead of a Rolex, they got a temple.

> We may
> also believe Herodotus on the causeway having
> borne reliefs, as parallels elsewhere suggest that
> this was normal.

> Again, that various members of the elite have
> “Priest of Khufu” among their titles displayed
> suggests the kind of royal funerary cult which was
> echoed on a more modest scale in the mastabas.

Not that it matters to the context of the temples of Giza at large as I note above, but are these titles to designate cult affiliation or an actual job title?

> So I don’t see a major problem here.

I think it is an insurmountable one. The temples at Giza are clearly different in many respects with those that came directly before and after. The mortuary temple of G1 is singularly unique as well. The temples at Dashur and Meidum are architectural retards by comparison giving the clear impression, in context of the temples that came directly after them as well, that they were not made by the same people for the same purpose. Whether one disagrees with this or not I do not think one can be honest with themselves and not see the stark disconnect between the temples at Giza and those directly before and after and chalk it up to mere whim on the part of Khufu and co. I think the sudden appearance of round columns where prior to this time there were none is part of this distinction which belies a contemporary foreign influence in its own right.

Regarding the idea the mortuary and or valley temple was somehow a direct parallel to mastaba chapels is interesting, but to me this would be an idea imposed upon namely the pyramids of Dashur after the fact and adopted as standard practice in the 5th Dynasty. However, it is still lacking as the exterior temples of the pyramids would serve the cult, not the interred, which the individual would require as per AE religion their own personal dedications. In other words, packing the pyramid full of funerary "stuff" only to know it would be robbed without the writing and art to go along with it is unacceptable particularly considering to the AE depictions of such things were just as good as the real thing essentially giving greater security of having what they would need in the afterlife regardless of whether the actual "stuff" was robbed. Physical goods and writing/art are meant to go hand in hand yet in the great pyramids there is nothing, which makes sense as they are clearly not "houses for the dead" either.