Note the wadi and the harbor. Supposedly there would have been canals cut from the Nile which fed the harbor in front of the Valley temple. During the annual inundation the Nile would have come right up to or much nearer the temples.

Part of the artificial harbor: 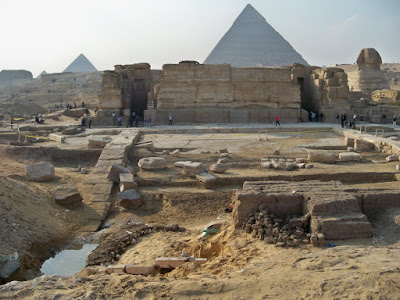 Note the most massive blocks are on the front side facing the Nile: To continue the train of thought I have been trying to work out here, it is interesting to me the largest blocks are on the Nile side of the temple. There must be a reason for this. Archeological evidence agrees with me the Sphinx temple was built after the Valley temple so what I am wondering is was there a time when there was no Sphinx temple and the Nile itself was a lot closer or came to the came to the Valley Temple harbor in which the Sphinx enclosure served as a "drainage" or "overflow" area of some kind during inundation. I talked about the drainage channel in the Sphinx enclosure so where was the water coming from that required a dedicated drawing ditch to be built? Was this its purpose?