> I think you've hit a big hornet's nest with this
> one. According to Britannica the Sphinx first
> appears at 1600 bce (excluding Giza) so I started
> to look for these 1600 bce sphinxes. Now I'm
> scratching my head over what they are calling a
> sphinx.
>
 
>
 
>
> There are a lot of pictures of ancient sphinxes
> with this same body style, on pottery in statues
> and carvings. Call me nuts but this doesn't look
> like a lion's body to me. Looks more like this
> .......
 

Yeah, I was thinking this myself but it's hard to say for sure.
The bodies do look a lot like this: and this kind of dog is depicted in AE art since at least 3,000BC.
But here is a Mycenaean gold seal that is definitely a lion, but has a similar body shape:

Interesting to think about.

> Next quick stop was Minoan dating. According to
> Wiki :
>
> archaeologists use two systems of relative
> chronology. The first, created by Evans and
> modified by later archaeologists, is based on
> pottery styles and the presence of imported
> Egyptian artifacts, which can be correlated
> with the chronology of Ancient Egypt.
> Another dating system, proposed by the Greek
> archaeologist Nicolas Platon, is based on the
> development of the architectural complexes known
> as "palaces" at Knossos, Phaistos, Malia and Kato
> Zakros. He divides the Minoan period into
> Pre-palatial, Proto-palatial, Neo-palatial and
> Post-palatial subperiods.
>
> I think you are aware that all of the ancient
> world is dated according to Egyptian chronology.
> They tie it in one way or another. If they can't
> tie it in, they're stuck. And Egyptian chronology
> is built upon the unproven, nonexistent, no
> evidence of... the Sothic cycle and someone
> supposedly named Manetho.

I looked quite a bit for sphinxes before the 12th Dynasty and other than what I already mentioned have come up empty. Another problem with the supposed Hetepheres II Sphinx is that it is a head of a woman which there are no women sphinxes until the NK either.

All things considered, I see see no reason to attribute it to the OK nor that the statue head of Djedefre, if it even is Djedefre, was ever part of a Sphinx either. One would think Sphinxes would be ubiquitous in the OK leading up to and after Khafre, but instead they are all but nonexistent. This seems to be a mystery hiding in plain site.

> Which takes us right
> back to the Sphinx at Giza. It's a nasty circle.
> As you say there is nothing that speaks of
> Egyptian sphinxes before the 12th dyn (Sothic
> cycle) then one would have to conclude there is no
> evidence of sphinx before then and the Giza
> monument was not originally a lion but was later
> retrofitted to be what had become a popular icon.
> Is logical to me.

It does seem to fit the evidence best.
You raise an interesting possibility that it was never originally an animal. The more I look at it the more frakenstienish it's form seems to be regardless of any later repairs.

It makes me wonder. We know (most) of the blocks of the Valley and Sphinx temples came from excavating the Sphinx enclosure yet the symmetry of the enclosure itself is awkward in relation to the Sphinx not to mention the relationship of the causeway to the Valley Temple which is completely wrong:

And all of it is way off center in relation to G2. For no apparent reason. We look at the weathering of the enclosure walls but forget this enclosure was also a quarry for the temple blocks: Image Source.
Look here as well at the quarry walls next to G2: 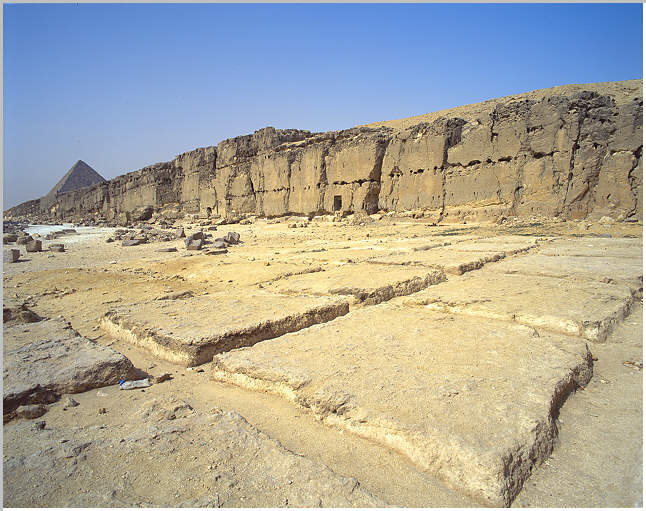 Here we have three quarry walls yet the latter two could not be more different than the Sphinx enclosure. It could be said the Sphinx enclosure was once this way as well and erosion changed it to its current state, but other than the fact they are angled, I am not seeing even a hint of artificial manipulation remaining. While it does seem to indicate a much older age for the Sphinx and associated temples, it makes me question what the Sphinx enclosure really was as well as what was the block in the middle that at some point was carved into a statue? The walls of the Sphinx enclosure do not look like they ever had blocks carved from them and why would they be left in such a rude natural state if the original intent was to enclose the world's greatest statue? Something is not right here.