> I think it's significant & should be examined
> closely.

Excluding the anomalous and suspect finds at Abu Roash, as far as I can find the Sphinx in Egypt was unknown until the beginning of the 12th Dynasty c. 2000BC where it appears abruptly with the first pharaoh and afterwards is commonplace.

Amenemhat I, first pharaoh of the 12th Dynasty: 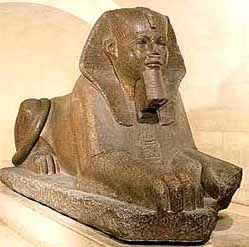 Whether or not this was made during his reign or after in memoriam I don't know, but there are enough Sphinx's directly after him that would certainly point to the 12th Dynasty as the beginning of sphinx iconography as displayed in the Sphinx itself. And if not the beginning then certainly an inexplicable renaissance which also requires explanation.
[11-10-17: Correction-this is Amenemhat II, 3rd pharaoh of the 12th Dynasty]

On and on it goes, yet how could it otherwise, with the possible exception of Abu Roash, be missing from the OK? It is interesting that in the 12th Dynasty there appears to be an influx of foreign influence at this time, namely Canaanites from the Levant, which may have been the impetus for the reassertion of the Dynastic state after the First Intermediate period, but I am also wondering if they brought the Sphinx ideology with them. By the 12th Dynasty it could have been buried in sand again which makes one wonder if the Sphinx was excavated at this time and recarved as a lion, an idea which Robert Temple suggests was the 12th Dynasty pharaoh Amenemhet II.

In Israel (Levant) at the site of Hazor c. 2nd millennium, a statue fragment was found of presumably a Sphinx with supposedly Menkaure's name on it:

Pharaoh's Sphinx Paws Found in Israel. I'd like to get a look at those hieroglyphs, but all things considered I would not rush to place the provenance of this Sphinx to the actual reign of Menkaure.

According to Encyclopedia Britannica (which speaks to some of your other thoughts as well:

Through Egyptian influence the sphinx became known in Asia, but its meaning there is uncertain. The sphinx did not occur in Mesopotamia until about 1500 bce, when it was clearly imported from the Levant. In appearance the Asian sphinx differed from its Egyptian model most noticeably in the addition of wings to the leonine body, a feature that continued through its subsequent history in Asia and the Greek world. Another innovation was the female sphinx, which first began to appear in the 15th century bce. On seals, ivories, and metalwork the sphinx was portrayed sitting on its haunches, often with one paw raised, and was frequently paired with a lion, a griffin (part eagle and part lion), or another sphinx.

About 1600 bce the sphinx first appeared in the Greek world. Objects from Crete at the end of the middle Minoan period and from the shaft graves at Mycenae throughout the late Helladic age showed the sphinx characteristically winged. Although derived from the Asian sphinx, the Greek examples were not identical in appearance; they customarily wore a flat cap with a flamelike projection on top. Nothing in their context connected them with later legend, and their meaning remains unknown.

After 1200 bce the depiction of sphinxes disappeared from Greek art for about 400 years, though they continued in Asia in forms and poses similar to those of the Bronze Age. By the end of the 8th century, the sphinx reappeared in Greek art and was common down to the end of the 6th century. Often associated with Oriental motifs, it was clearly derived from an Eastern source, and from its appearance it could not have been a direct descendant of the Bronze Age Greek sphinx. The later Greek sphinx was almost always female and usually wore the long-tiered wig known on contemporary sculptures of the Daedalic style; the body became graceful, and the wings developed a beautiful curving form unknown in Asia. Sphinxes decorated vases, ivories, and metal works and in the late Archaic period occurred as ornaments on temples. Although their context is usually insufficient to enable their meaning to be judged, their appearance on temples suggests a protective function.

> The front is actually squared, this is easier to
> see in the old photos. Without the paws and tail
> there is basically a keyhole structure. I don't
> think it was originally an animal.

Yeah, I always thought it odd his back was so flat. 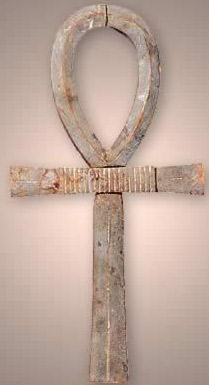