Mysteries :  The Official GrahamHancock.com forums
For serious discussion of the controversies, approaches and enigmas surrounding the origins and development of the human species and of human civilization. (NB: for more ‘out there’ posts we point you in the direction of the ‘Paranormal & Supernatural’ Message Board).
Welcome! Log In• Register
Go to: Forum Home•Board•New Topic•Search
Re: Mesopotamian Origin of the Egyptian Serekh Palace Facade Building
Author: Thanos5150 ()
Date: November 10, 2020 11:40PM
Thanos5150 Wrote:
-------------------------------------------------------
> The Mesopotamian palace facade motif was not
> limited to the serekh, but was part and parcel of
> many AE structures as can be seen throughout early
> Dynastic history up until the 3rd Dynasty which
> beyond this period falls out of vogue for unknown
> reasons as the favored stylistic construction
> meme. After this time, it becomes relegated almost
> exclusively to the interiors of tombs as a
> symbolic homage of reliefs and/or paintings.

I have recently come across the unique Abu Bakr cemetery located at the far west of the G1 West field cemetery. If you look HERE it is located at the top right with the North line pointing right at the two major mastabas of this complex, Lepsius 19 and 20-21. The site was first excavated by Lepsius then later in the 1950's by Professor Abu Bakr though his work was never published. From 2000-2006 a salvage excavation was undertaken and the site was remapped and cataloged.

The present volume reflects the work of the joint expedition of Cairo University and Brown University to record and publish the tombs uncovered on behalf of Cairo University by Prof. Abdel-Moneim Abu Bakr from 1949 through 1953, but never published. The loss of field records and lack of a map of the site meant that new, salvage excavation had to be undertaken. A total of six seasons, from 2000-2006 resulted in the clearing, remapping, and recording of the monuments in the cemetery. Abu Bakr Cemetery is of particular interest because the majority of mastaba tombs belong to relatively low-ranking individuals. Thus they have the potential to she light on the social status of Egypt's working classes.


While the site initially appears to be dated largely to the 5th-6th Dynasties, it was of particular interest to me to find this old photo showing a substantial palace facade style enclosure wall of the complex: 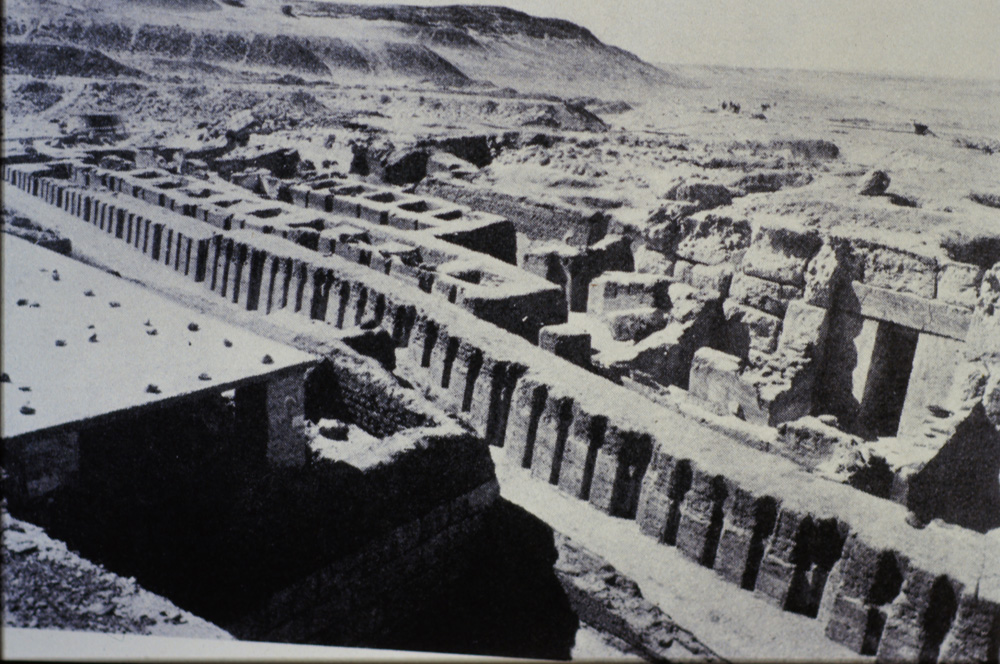 I do not have enough information about the site to make any judgement as to any potential for earlier dating, there may well be none, but I find it unusual that of all the OK funerary complexes and clusters at Giza and elsewhere that this lone peripheral cemetery of low level officials would have such an otherwise unique to the period palace facade wall. Given the ubiquitous 4th Dynasty and later OK reverence of the palace facade serekh building motif I would expect such walls to be the norm but they are not which makes me wonder if the foundations of this cemetery predate the 4th Dynasty or that the inhabitants of this cemetery had some special reason to border their complex in this way.