Mysteries :  The Official GrahamHancock.com forums
For serious discussion of the controversies, approaches and enigmas surrounding the origins and development of the human species and of human civilization. (NB: for more ‘out there’ posts we point you in the direction of the ‘Paranormal & Supernatural’ Message Board).
Welcome! Log In• Register
Go to: Forum Home•Board•New Topic•Search
Re: Mesopotamian Origins of Writing
Author: Thanos5150 ()
Date: November 24, 2016 05:32AM
DScribr Wrote:
-------------------------------------------------------
> On their writing methods: You had posted yesterday
> pics showing the AE and Mesos writing methods, (or
> systems) was very similar at their beginnings, but
> then they evolved separately into the 2 very
> different writing methods we know today.
>
> IMO, this seems to support the idea that they were
> once friends, trade partners etc....but then
> parted ways soon after the use of pictograms
> began, and this is much earlier than what most of
> the evidence supports.
>
> Thoughts?

What the evidence suggests to me is that these foreigners were limited in numbers, separate/separated from their governments, and stayed to evolve along with the local populations. Given their technical and cultural "superiority" the quickly were able to take control with little conflict. Part and parcel with this I would suggest is some of their imposing and strange physical appearance, being robust in stature with odd skulls. They may have been seen as divine and/or sold themselves as such. Unlike the pharaohs, Mesopotamian kings were not considered gods which I thinks speaks to this.

Narmer is depicted as a large imposing figure wearing the elongated white crown of upper Egypt: 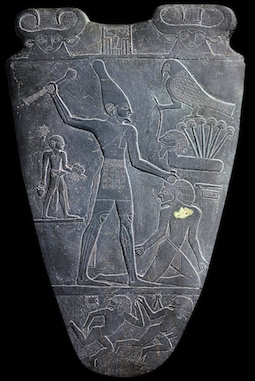 Bloodlines were obviously very important to AE nobility and again elongated skulls associated with royalty were common physically for nearly 2,000yrs. I do not think this a coincidence. As weird as elongated skulls may be, its is a real thing with a long and curious history spanning thousands of years and several cultures in the greater ancient Mediterranean world.

Regardless, Mesopotamia was a land of merchants whose economy was powered by traveling far and wide for goods which was ultimately the relationship that was first struck long before the formation of the Dynastic state. To theorize, I suspect the people that became the Foreign Elites, the 1st pharaohs, were relatively small groups with a separatist bent motivated to take control of Egypt to command and exploit trade who basically set themselves as as living "gods". I have to wonder if the ritual of burying boats was part of this forsaking of their nationality to live for good in Egypt. Maybe a sign of fealty.