Author of the Month :  The Official GrahamHancock.com forums
Join us at this forum every month for a discussion with famous popular authors from around the world.
Welcome! Log In• Register
Go to: Forum Home•Board•New Topic•Search
Rapid origin for the Grand Canyon
Author: dwm ()
Date: January 08, 2012 08:01AM
Evidence suggests that the Grand Canyon may have been formed rapidly, rather than over millions of years as is usually argued.

If you visit the Grand Canyon, all the presentations given by the National Park Service in the visitors' center etc. will declare that erosion from the Colorado River is responsible for carving this majestic geological feature, which is over a mile deep and eighteen miles wide in some places. There will be no hint that there could be any other explanation.

However, there are several problems with the conventional explanation. Walt Brown points out numerous difficulties that the conventional theory has difficulty explaining in his book, which contains an entire chapter on the Grand Canyon and its origin (see here). For one thing, why would a river continue to gouge deeper and deeper into harder layers instead of following the path of least resistance? At some places, it has cut downward in a very sharp "V" shape.

Even more difficult to explain is the strange path followed by the Colorado River before it gets to the Grand Canyon. As shown in the image below, it follows a north-to-south path along the east side of a large massif called the Kaibab Plateau before suddenly making a sharp right turn (to the west) and plowing right through the Kaibab Plateau. What causes a river to turn towards a huge plateau, and how does a river erode right through it? Why wouldn't it follow the "path of least resistance"? 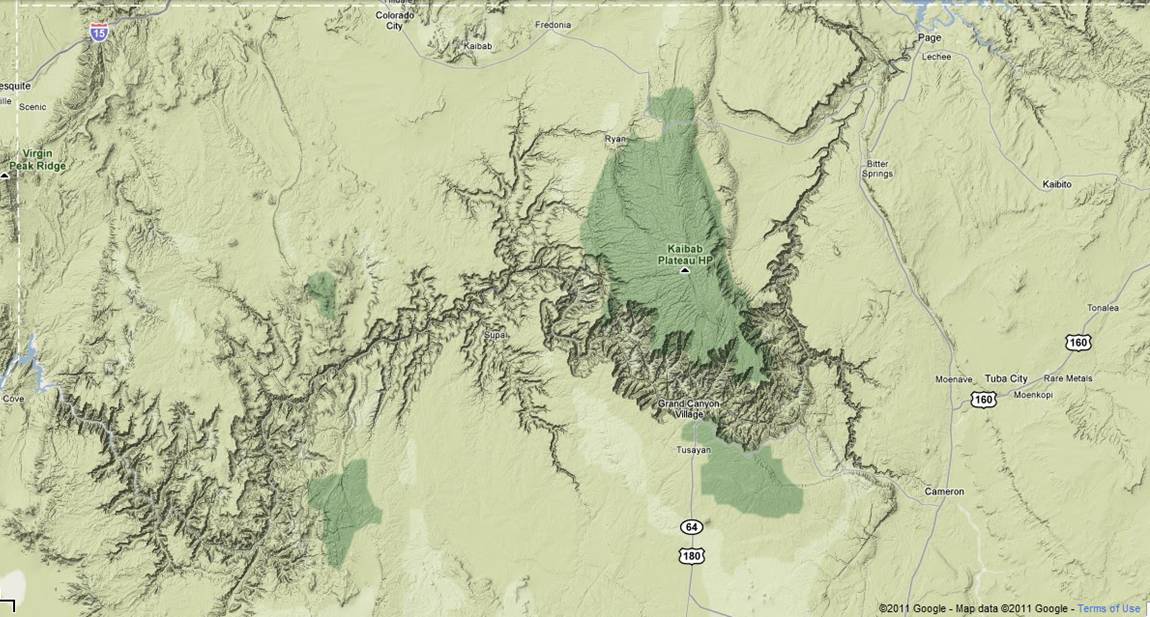 The Kaibab Plateau is the green terrain feature on the Google Map in the image. In this image, also note the curious "funnel shape" above and to the right of the Kaibab Plateau (northeast, along the line of the Colorado from the point it plows through the Kaibab). What caused this funnel shape where the river comes out? It looks like someone blasted through the terrain with a high-pressure nozzle there. (Draw a line between the words "Page" and "Bitter Springs" on the map and you will see the funnel just above the line).

Walt Brown's hydroplate theory suggests that after the global flood, huge inland seas of water were trapped after most of the floodwaters ran off the thickened continents. In some areas, these trapped giant lakes were raised to much higher elevations by the uplift of plateaus -- most major mountain ranges have uplifted plateau areas around them, including the Tibetan Plateau near the Himalayas, and the Colorado Plateau near the Rockies.

Dr. Brown finds evidence that two such enormous postflood lakes were elevated in the region of the Colorado Plateau, which he names "Hopi Lake" and "Grand Lake" (see image).

If precipitation exceeded evaporation and outflow from these lakes, they could have breached violently (other factors could also trigger a breach). In the case of the two lakes above, Dr. Brown suggests that Grand Lake may have breached first, and the gouging caused by the outrush of water from Grand Lake may have eroded the barrier holding Hopi Lake in, allowing it to breach not long after -- the mixing of the erupting water from the two lakes created the confused and complex canyon patterns at Nankoweap Canyon, for example.

Dr. Brown points to the funnel described above as one important clue. He also notes that the direction of the "barbed canyons" downstream from the funnel do not point in the direction that tributaries of rivers normally point.

He explains how this evidence, plus numerous other geological clues, support the argument that the Grand Canyon was carved rapidly and catastrophically, within weeks or at most months, not over millions of years.

There are other pieces of evidence from the area covered by the proposed Hopi Lake and Grand Lake which also appear to support the hydroplate theory explanation (such as the petrified forest found within the area proposed for Hopi Lake and indicated on the map above -- more on the importance of petrified wood is found in this blog post: [mathisencorollary.blogspot.com]).

The possibility that the flood is responsible for the formation of the Grand Canyon also would appear to argue against the popular theory that ancient "flood legends" from the Mediterranean and Near East / Levant are the product of a localized flood that affected that region alone (a local Mediterranean or Black Sea flood would not carve the Grand Canyon). Also, remember that flood traditions are found around the world, including in the Americas.

The Grand Canyon is a very important geological clue to the history of our earth.