Author of the Month :  The Official GrahamHancock.com forums
Join us at this forum every month for a discussion with famous popular authors from around the world.
Welcome! Log In• Register
Go to: Forum Home•Board•New Topic•Search
THE QUEEN OF SHEBA
Author: MDaines ()
Date: February 21, 2020 02:08PM
Part 5 of ‘Hidden Meanings’

The Queen of Sheba is the Greta Garbo of antiquity. A glamorous, mysterious figure immortalized in the Bible and the Quran, celebrated in an oratorio by Handel, an opera by Charles Gounod, a ballet by Ottorino Respighi, and depicted in paintings by Raphael, Tintoretto, and Claude Lorrain, she remains tantalizingly elusive to the inquiries of historians.

This quote is taken from the National Geographic website on the theme of Ethiopia, a land connected to the story of the Queen of Sheba through the Kebra Nagast. It can’t say who she really was or when. The Queen of Sheba has that in common with another mythical character from deep antiquity, Hermes Trismegistus. It’s possible to find many references but the figures remain elusive, impossible to pin down; the reader satisfied only that they have not got to the bottom of a great and extremely ancient mystery. 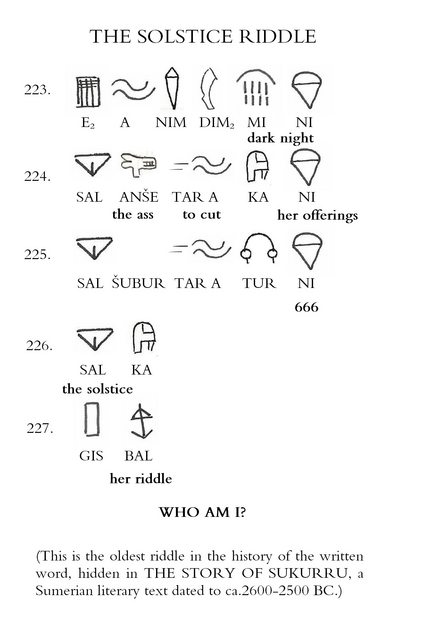 Part 4 A Toast to the Seven:
[grahamhancock.com]

And when the queen of Sheba heard of the fame of Solomon concerning the name of the LORD, she came to prove him with hard questions. 1 Kings 10:1 (King James Version)

The ‘hard questions’ posed by the Queen of Sheba have been interpreted as riddles. She was understood to be a prophetess, a sibyl. Like Balaam, she would have engaged in rituals in order to make predictions, to secure an outcome. In the biblical tale, Balaam was the prophet but it was his servant, the ass who alone could see an angel and who spoke out when she was stopped in her tracks. 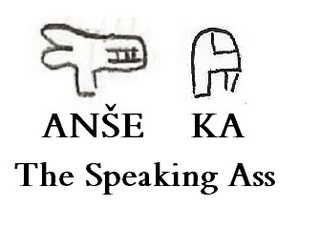 When dealing with Sumerian scribes, adjust to the mindset. KA-BAL, the rotated word, was a double clue here; the presence of a riddle and an order. 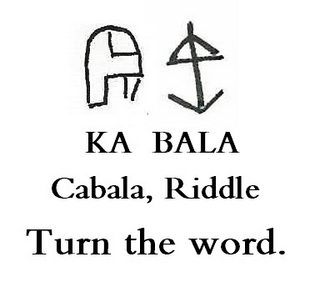 Turn the symbols of line 227, turn the wooden spindle that opens the door to a new era:

The wooden spindle with round curses churning…(…) the door to another era opens.

and find there BALGIS, epithet of the Queen of Sheba.

The Queen of Sheba is known as Balkis or Balqis through the Arabic and also Bilgis. KIS₂ is another phonetic value of GIS, the tree. BAL is the rotation of the celestial spindle mentioned by Plato and found in a proverb on my website. The epithet Bilgis is also of Sumerian origin and not a corruption of BAL-KIS₂. It is likely sourced from the symbol for fire and renewal, BIL₂, which can also be heard as BALA, giving BIL-GIS.

As for the much discussed name Sheba, it is probable that the Queen takes part of her name from the SHE of ANŠE, the speaking ass. Note that academia considers AN to be the prefix of a god or goddess. ŠE is given most often with the meaning ‘grain’, the source symbol of ‘seed’. The ass is a goddess! In some accounts of the Queen of Sheba, there is a strange reference to her ‘hairy legs’ noticeable when she lifts her skirts. I would say this riddle gets to the bottom of that one.

AN-ŠE translates easily to ‘Goddess of the Grain’ or perhaps ‘Goddess of the Harvest’ or ‘Goddess of Fertility’ – certainly Goddess of the Beer (see the 5th proverb recently posted to my website). Confirmation comes from the ancient lexical lists where ANŠE is broken down to AN and ŠE. It could also translate to ‘seeds of the sky’ or ‘seeded from the sky’. The ‘toast to the seven’ from MI-NI/IMIN brings up the intriguing possibility of a reference to the Pleiades, the ‘seven sisters’. See part 4. But it could, of course, be ‘merely’ a reference to the seven known planets.

The Offerings
The symbol ŠUBUR, for which I didn’t find an early version, has the meaning ‘servant’. With SAL it was translated as a female servant. The story of the Queen of Sheba’s journey makes mention of servants more than once, both hers and his. The three NI indicate, as they also do on the Warka vase, offerings brought by a train of servants to a regal figure. 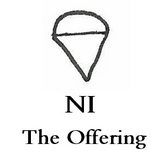 And she came to Jerusalem with a very great train, with camels that bare spices, and very much gold, and precious stones: and when she was come to Solomon, she communed with him of all that was in her heart. 1 Kings 10:2

666
As for the suggested presence of 666 encoded into the sixth-symbol positioning of the three NI in THE STORY OF SUKURRU, confirmation of the importance of that number is also found in the biblical account of the Queen of Sheba’s visit to King Solomon:

Now the weight of gold that came to Solomon in one year was six hundred threescore and six talents of gold, 1 Kings 10:14 (KJV)

Some accounts mention that she is black. The symbol MI has the meaning ‘black’ as well as ‘night’. MI is integral to the concept of gnosis discussed in another post: GNOSIS, 666:
[grahamhancock.com]

The Queen’s Thirst
Note the presence of symbols TAR-A-KA together on line 224. This is surely linked to the part of the tale where the Queen of Sheba is duped by King Solomon into drinking water after swearing that she would touch nothing. TAR means ‘to cut’ and KA with A, mouth and water have the meaning ‘thirst’ (and another phonetic value NAG). The queen was obliged to ‘cut her thirst’. At the same time, with repetition of TAR-A in the same position over two lines, and the meaning ‘to cut the flow’ also possible, this portion of the riddle can be seen as a reference to the halting of the sun at the time of the solstice.

The Lord
And what of “the name of the LORD”? (see quote above). There is another interesting reference in the City of God (Augustine of Hippo, 5th century AD) which strikes me as not unrelated:

For Flaccianus, a very famous man, who was also a proconsul, a man of most ready eloquence and much learning, when we were speaking about Christ, produced a Greek manuscript, saying that it was the prophecies of the Erythræan sibyl, in which he pointed out a certain passage which had the initial letters of the lines so arranged that these words could be read in them: ᾿Ιησοῦς Χριστος Θεοῦ υιὸς σωτηρ, which means, "Jesus Christ the Son of God, the Saviour." And these verses, of which the initial letters yield that meaning, contain what follows as translated by someone into Latin in good rhythm:
(…)Lactantius also inserted in his work the prophecies about Christ of a certain sibyl, he does not say which.

The Tree
Symbol GIS has so far been explained only as the ‘wood’ of the spindle or as a tree. It has other similar phonetic forms: GEŠ, ĜIŠ, ĜEŠ. If it were to be understood as the name of a man, later scribes would no doubt add Sumerian US₂, symbol of the penis, as seen in the ancient Greek names; Zeus, Chronus, etc. In the context of this acrostic, it’s interesting to note the position of GIS, immediately following the vertical reading of the three solstice symbols preparing for the return of the sun. A birth name?

The presence of the solstice riddle in THE STORY OF SUKURRU serves to prove beyond reasonable doubt the validity of my translating method. I hope that at least a few people will have followed from beginning to end, from part 1 to part 5 and will have understood the importance of it, the new questions that it raises. First and foremost, it brings into question the dating and meaning of other important texts and of the Queen of Sheba and King Solomon. It strongly suggests that they were not who they were thought by many to be… Then again, why did scribes in 2500 BC feel the need to encrypt the solstice story? Were they copying on a still more ancient tradition? Has the riddle given up all its secrets here? Has the text of THE STORY OF SUKURRU given up all of its riddles? Who knows?

I’ve posted a proverb to my website where ANŠE, the speaking ass, appears, confirming her solstice link (currently 5th in the list).