Author of the Month :  The Official GrahamHancock.com forums
Join us at this forum every month for a discussion with famous popular authors from around the world.
Welcome! Log In• Register
Go to: Forum Home•Board•New Topic•Search
GNOSIS, 666
Author: MDaines ()
Date: February 14, 2020 10:30AM
Etymological dictionaries inform us that gnosis, the quest for truth and name of a philosophical mindset close to that of early Christianism, stems ultimately from a non-specific Proto-Indo-European (PIE) root 'gno-' meaning 'to know'. This would lead to Greek gignoskein: ‘to learn’, ‘to come to know’ while Latin gigno, a word too closely connected to be ignored, has meanings which include ‘to generate’, ‘to be born’, ‘to yield’. Thanks to the Sumerian language, it’s possible to take ‘gnosis’, ‘gigno’ and ‘gignos(kein)’ one giant step further back in time to a considerably less nebulous root: 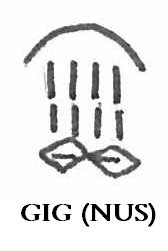 Looking at images of GIG during the translation of THE STORY OF SUKURRU, I noticed that it incorporated – to my knowledge without special mention in Sumerian dictionaries (always willing to be corrected) - symbol NUS, the ‘egg’ or ‘bead’. NUS is the symbol that takes the form of the ovoid shapes below the vertical strikes. Thus, GIG contains NUS, can be unpacked and potentially read – discreetly - as GIG-NUS. The egg is hidden inside… I sense the hand of a great magician.

Without NUS, the symbol is given as MI, with meanings ‘black’ and ‘night’. But when combined with NUS, it takes on more sinister meanings; ‘to be sick’ and ‘troublesome’, listed in Sumerian dictionaries.

Gnosticism is thought to have originated around the first century AD. Yet this Sumerian symbol indicates that the label of it, whatever form it took over the ages, was known long before then. The first monks to practise an ascetic form of early Christianism, the renunciation of personal possessions for a life of solitary contemplation, were said to be Paul of Thebes and, shortly thereafter, the better-known Saint Anthony of Egypt, 251-356 AD. They were, we are told, the earliest desert monks, the first hermits. Both were Egyptian and both are understood to have lived beyond the age of 100. May historians forgive any slip-ups. For the pleasure of repeating myself, the symbols themselves are my guides.

Images of Saint Anthony of Egypt show him holding a staff with a T-shaped handle, and that of Sumerian ME. Ethiopian priests carry the same for their ceremonies. A chapter in BEFORE BABEL THE CRYSTAL TONGUE is dedicated primarily to ME, the ultimate symbol of all ‘magic’, source of the Greek capital letter ‘T’, emblem of Saint Anthony.

“Gnosticism and magic are inseparable.”

It is conceivable that Saint Anthony, known for affronting his demons in the desert, was one in a long history of monks and disciples of Hermes Trismegistus, a figure assimilated to Egyptian Thoth in antiquity. And that Gnosticism was at the heart of their faith. Perhaps anecdotal but worth a mention nevertheless: a neat version of the T is strategically etched into the lintel stone of the King’s Chamber inside the Great Pyramid. (See ME in the first proverb on my website. See the photos in the book.)

Last but not necessarily least, is GIG-NUS part of an astonishingly ancient code, older than all the biblical texts, as old or older than the Book of Revelation? I have already pointed out elsewhere that ancient Greek has its source in the sounds and meanings associated with the Sumerian symbols. Playing around with a calculator of isopsephy (thank you, Spiros, for the tip), the ancient Greek code by which numbers were assigned to letters of the alphabet, I was intrigued to discover that the letters comprising the troublesome GIG-NUS amount to exactly 666. Does this have any significance? Perhaps not. Does the rabbit hole go deeper? Perhaps. For he who has understanding…

Symbol GIG(NUS) appears in two of the proverbs translated and posted to my website.