Author of the Month :  The Official GrahamHancock.com forums
Join us at this forum every month for a discussion with famous popular authors from around the world.
Welcome! Log In• Register
Go to: Forum Home•Board•New Topic•Search
Re: Constellations and the Zodiac
Author: Barbelo ()
Date: August 13, 2019 09:53PM
If cavemen in France could do it 40 000 years ago, surely it must be a piece of cake for us, more evolved lot.

Now, in your country one couldn't imagine the indigenous folk spotting a bison roaming across the wide, brown country and that night going into their cave, cooking up some grub and looking up into the night sky and seeing a bison motif in the stars which required them to paint it on the walls of their natural abode to signify the current age in which they lived.

Namely, because no bison were roaming around.

That's where the Frenchies have the advantage.

However, your indigenous folk were quite skilful cave wall painters but, lacking in rams, equine archers, goats, water carriers and the wealth of stimulation available to the Lascaux crowd, had to resort to goannas, fish and palm prints.

Given any of the photographs in the OP, I daresay that anyone of your folk who has the skill to draw an x-ray reptile on a cave wall could also, with the assistance of a keen piece of charcoal, manage to connect the dots in said photo into whatever takes their fancy.

And so, with the Frenchies. And the Anatolians. And the Greeks. And so on.

But somehow, at some time, a convention was agreed upon (despite the language barrier) that a lion is a lion is a lion, wherever in the world one happens to gaze up at the myriad of stars at one's disposal. Even in places where lions don't exist.

It's really quite remarkable. Even beats the shenanigans at the Council of Nicaea in 325.

I'll leave you with a real easy one. 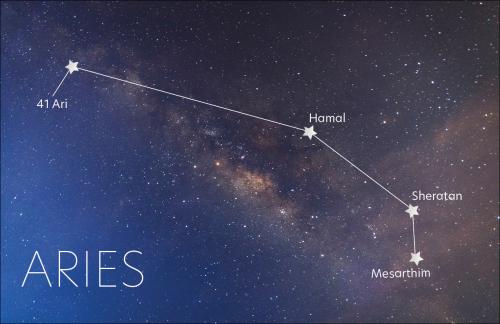 Now, anyone who can't instantly recognize that group of stars amongst the millions on offer, as a male sheep, should not be writing books on the subject of decoding the zodiac. It is so intricate, it makes one wonder, just how many herds of rams must be frolicking around the heavens?

Am I being too harsh? Or, should I just stop making sense.