Author of the Month :  The Official GrahamHancock.com forums
Join us at this forum every month for a discussion with famous popular authors from around the world.
Welcome! Log In• Register
Go to: Forum Home•Board•New Topic•Search
Great idea - lets make it happen!
Author: Robert Jameson ()
Date: February 26, 2019 09:43PM
Thanks Mike – that would be great.

When would be the best time? Well I will be getting involved in an election that must be held before the 18th May 2019 – but with Australian Federal Elections they are not fixed term – so the election could be called anytime. If then you start a petition the best time for me to be Author of the Month would be June 2019 or after.

I would really love to be the Author of the Month on the Graham Hancock Forum. It is very difficult for unknown writers to get their work recognised – especially if their concepts are somewhat; ‘out there’ – as my ideas tend to be! However, The Bali to Bairnsdale Alignment and Earth’s Reproductive Chakra has some very significant finds. If you remove the ‘Earth’s Reproductive Chakra’ from the concept – and the fact that many of the geological features of the Australian continent reference to male and female reproductive anatomy – you are still left with a very significant alignment! From my book:

What I now call the Bali to Bairnsdale Alignment passes through Mt Agung in Bali, Indonesia. Crossing 1,200 kilometres of the Indian Ocean it enters the Australian continent at Pender Bay in Western Australia. Here it precisely intersects the point where the Fitzroy River flows into King Sound. It continues inland through the Great Sandy Desert. In the Northern Territory the line passes through the Olgas, Uluru and Mulga Park before entering South Australia near Mt Woodroffe. It continues on through the Aboriginal mission Pukatja (formerly Ernabella), Mintabie Opal Fields, Cadney Homestead, Mt Willoughby (Painted Desert), Olympic Dam mine, Andamooka Opal Field, Wilpena Pound, the Becker and Hagens Grid Point 44 and the Teetulpa Goldfield. On entering New South Wales the line passes through Wentworth where the Murray and Darling Rivers intersect. From Wentworth it follows the Murray River, connecting with numerous towns and cities that include Merbein, Mildura, Red Cliffs, Robinvale, Tooleybuc, Swan Hill, Barham, Cohuna and Echuca – a part of Australia variously known as Sunraysia, the Riverland, the Riverina or the food bowl of Australia. In Victoria it precisely intersects the junction of the Murray and Goulburn Rivers. Leaving the Murray River the line follows the Goulburn River to Shepparton, passes through Violet Town; and terminates at Bairnsdale where the Mitchell River flows into Lake King, Gippsland Lakes.

And the above brief overview does not mention the fact that King Sound has 11 metre tides, The Great Sandy desert has helical shaped sand hills, Mt Woodroffe has the largest known gravity warp in the world, the Mitchell River (tiny by world standards) has the largest digitate deltas in the world; etc. etc. etc..

The Bali to Bairnsdale Alignment 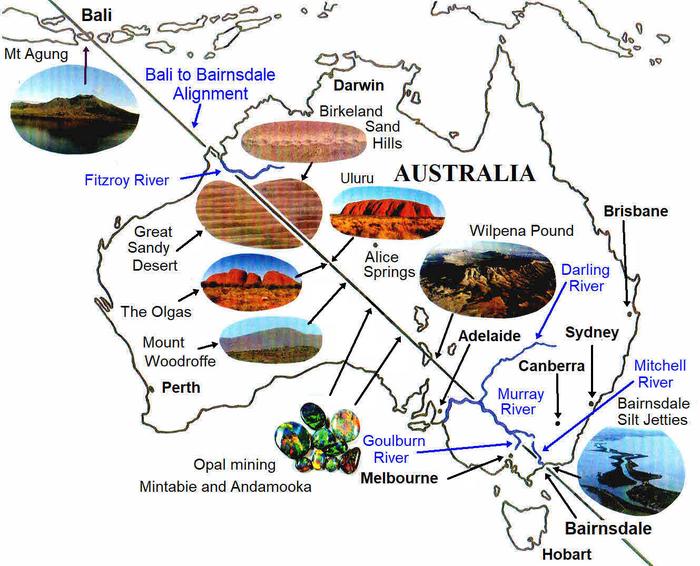