Author of the Month :  The Official GrahamHancock.com forums
Join us at this forum every month for a discussion with famous popular authors from around the world.
Welcome! Log In• Register
Go to: Forum Home•Board•New Topic•Search
Re: Helpful list of evidence that earth is a sphere
Author: carolb ()
Date: March 29, 2016 05:31PM
Nolondil Wrote:
-------------------------------------------------------
> Even before we could reach extreme
> altitudes ourselves to see the curvature of the
> Earth, we could see extreme altitudes.
> Weather has been easily visible since long before
> any humans were around to see it. Just pay
> attention to the sky, which we moderns don't do
> much anymore. But ancient people did. Often, an
> incoming weather front at 30,000+ feet or more
> will be obviously curved. You can see how
> it extends away into the distance in a curve, not
> a straight line. The same kind of reasoning that
> allowed people to realize that the differing the
> angle of the sun would show the circumference of
> the Earth
> (E
> ratosthenes in the 3rd century BC) would
> surely lead people to realize that the curvature
> of high-altitude weather fronts was a sign of the
> curvature of the Earth itself.


Another great proof is that the sun can cast shadows on the undersides of clouds as it's rising or setting. This couldn't happen on a flat earth, where the sun is always circling above the clouds: 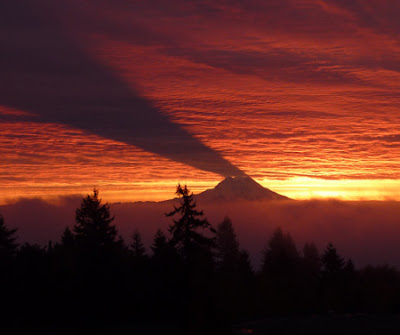