Author of the Month :  The Official GrahamHancock.com forums
Join us at this forum every month for a discussion with famous popular authors from around the world.
Welcome! Log In• Register
Go to: Forum Home•Board•New Topic•Search
Re: Helpful list of evidence that earth is a sphere
Author: carolb ()
Date: March 19, 2016 11:04PM
dwm Wrote:
-------------------------------------------------------
> Thanks cladking
>
> I will definitely check that out!
>
> For readers raised in the US, may want to
> substitute the word "ruler" where it says
> "straightedge" above, unless your fifth grade
> teacher insisted on your calling it a
> straightedge, as mine did. Even so, I had to
> re-read the sentences before I figure out what I
> was supposed to hold out at arm's length! I
> couldn't figure out how to hold out the large body
> of water at arm's length, until I realized the
> straight edge was a ruler, not a description of
> the water! (This is probably only a problem for
> speakers of American English!)

Lol! I had the same problem, reading Cladking’s post, until I read your explanation, David. I’d never heard the term ‘straightedge’ for a ruler, and like you, didn’t understand what was to be held out at arm’s length!

Anyway, Cladking, if you read this, I don’t think you could see the curvature quite so easily.

Here’s an illustration I took from a Facebook discussion of flat earth, showing the curvature of the earth over an extent of 100 miles:

The curvature is barely perceptible at that extent, not to mention the much shorter distance of 40 miles or even 6.6 miles. Pilots don't report seeing it until they're between 50,000 - 60,000 feet up.

I think we tend to forget just how huge the earth is in comparison with the size of a human being. We’re no bigger in relation to earth than a sub-atomic particle would be in relation to the surface of one of those large coloured balls people use at the gym.

If we were to stand on a flat field, or sit in a boat out at sea with no land in sight, the plane of which we were the centre point would be, to all intents and purposes, a horizontal one, not one curving away from us at the edges. We could never perceive the sort of curvature we would see if we were standing, say, on a hypothetical ball about 100 feet in diameter.

What we can see, however, is the effect of the curvature, if we were looking at a ship sailing towards the horizon. If we used a telephoto lens, we'd see it disappear hull first over the bulge of the curve, like this: 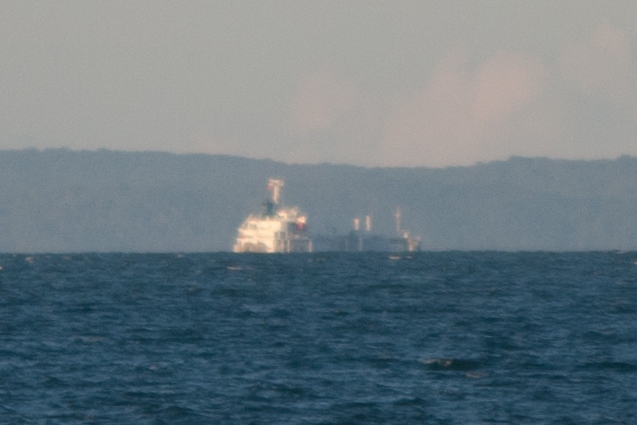 It’s the huge size of the earth in comparison to the size of a human being that causes a lot of the flat earthers to argue that the earth is flat. They don’t realize that the curve is so gradual that it’s imperceptible over even quite large distances. Hope this helps!