Author of the Month :  The Official GrahamHancock.com forums
Join us at this forum every month for a discussion with famous popular authors from around the world.
Welcome! Log In• Register
Go to: Forum Home•Board•New Topic•Search
Re: South African Gold and Ancient Astronomical Sites
Author: Mr.Ward ()
Date: September 06, 2013 03:20PM
David Campbell wrote:

> It's been a long time since I looked into the El Dorado story,
> but I recall from reading that the legend involved the Golden
> Man covering himself with gold dust and plunging into a lake in
> some purification ritual. Over the course of several hundred
> years there would have been a significant deposit of gold dust
> at the bottom of that lake.

Yeh, I recall this too now you have sparked my overly abused brain in to gear! Haha.

I believe it's called the Muisca Raft(?) that was used during the naming ceremony of the new leader. Gold coated men would float towards the centre of the lake, where offerings were dropped in to the lake and rituals performed.

Do you think this truly was where the El Dorado legend came from? 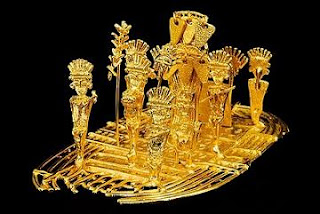