Inner Space :  The Official GrahamHancock.com forums
For discussions on all matters relating to personal development, religion, philosophy, psychology and so on.
Welcome! Log In• Register
Go to: Forum Home•Board•New Topic•Search
The Giza Elections
Author: Spiros ()
Date: June 01, 2019 05:44PM
From:

This unusual format can hardly be an accident. The word seven occurs in Revelation more than any other book in the Bible. In fact, it occurs more than all the other books in the New Covenant combined. It was not a literary device used by John because he was merely recording what he had seen and heard.

In my book Amphion's Secret I show how the Great Pyramid was planned based on a mountain in Greece that relates to the geometric shape of the heptagon. 7 points.

If I am not mistaken the last time these elections were held on July was 1875. This is 144 years ago. Curious number since it springs up in Revelation in Chapter 7 as 144.000 people.

So lets take the 7 number to the extreme.

The question that naturally arises is what should we choses as the observation point. We could use the geographical coordinates of the Great Pyramid for example.

But Giza does not relate to the 7 number, it relates to the 6 number.

We thus chose the tallest peak of mount Parnassus which is the natural model based on which the Khufu pyramid was planned.

What do we notice?

We observe the Sun - Ra, the Orion belt stars - Sah, and Sirius - Sopdet.

I include here a screenshot I used on a Greek phorum: 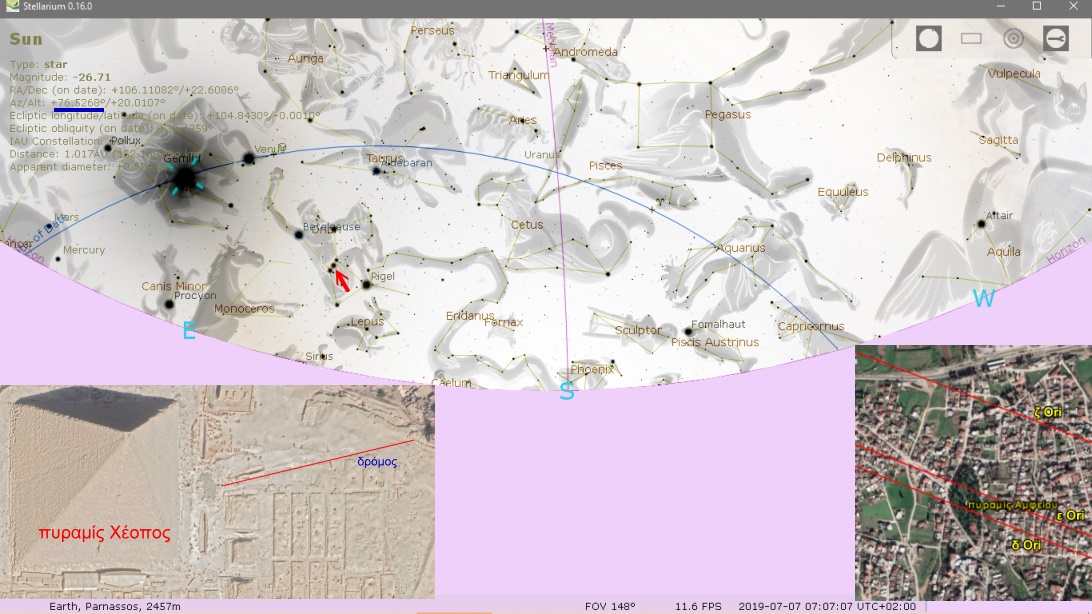 We notice the direction of the Sun is that of the Khufu pyramid causeway.

The Orion belt stars as also Sirius target the sacred city of Thebes. It is here that the mountain is observed in the horizon(Khufu's horizon: the pyramid). In the screenshot the Amphion pyramid is depicted.

This alignment is one that relates to the date of the year. If we don't go too off when we chose the year it will work for other years also.

I just want to note that if we use the actual year of the Annunciation of Virgin Mary as year 1, then we are currently in the year 2023. This is a multiple of 7:

The election will be held on Sunday. This is the day of the Sun, the azimuth of which is noted.

I will also present a isopsephy relation which relates this day with John: