Science & Space :  The Official GrahamHancock.com forums
For all that is Scientifically related to Cosmology and Space. (NB: Please take discussions about UFOs, possible Alien contact, Crop-Circles, Alien Abductions, Planet-X and Niburu to the ‘Paranormal and Supernatural’ Message Board).
Welcome! Log In• Register
Go to: Forum Home•Board•New Topic•Search
Re: Am I the only one who read The Mars Mystery by Graham Hancock?
Author: carolb ()
Date: April 28, 2018 10:07PM
Itatw70s Wrote:
-------------------------------------------------------
> I decided to borrow this OP to remind folks that
> COMETS ARE DANGEROUS to our planet.
>
> According to Graham, Earth, the Moon and Mars all
> had impacts that changed the history and condition
> of these three objects.

But this happened billions of years ago, not 10,000, as Graham claims.

> The fact that Mars IS DEAD is a message that us
> Earth folk cannot afford to forget. As Graham
> indicated in his book, Mars may have been a
> hospitable planet with oceans and rivers. I find
> it interesting that the earliest description of
> Mars in the 1800's described Mars with many
> canals, which was revelatory at that time, seeing
> that no probe or Lander had touched the planet, as
> we now know. Was it an Ancient memory to the
> astronomer's consciousness? Surely, intuitions do
> occur for some reason unknown to our modern
> scientists.


No, it was simply an optical illusion, caused by straining to see the surface of Mars with telescopes that were nowhere near as powerful as our current ones. Pushed beyond the limits of resolution, the brain creates lines that the eye thinks it sees on blurry images, but which don't actually exist. Together with a vivid imagination, you get an enthusiast like Percival Lowell, who created a whole mythology of aliens trying to irrigate a dying planet. He got it completely wrong (but at least we have the Lowell Observatory, which he established to study Mars, as his legacy!) 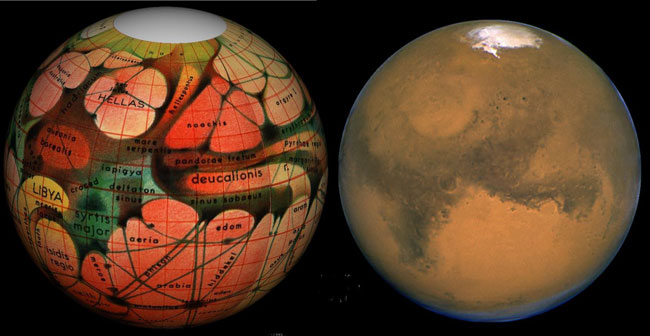 > My point is that our Earth has crossings of comet
> fragments regularly. In fact, the two annual
> visitations are June 24 to July 6, and November 3
> to 15.
>
> Graham also said that our current attitude about
> impacts are dangerously lethargic and careless (my
> words). He expects us folks to reinvent ourselves
> in the twenty-first century (page 283).


There's already an organization called Spaceguard, whose aim it to detect and study Near Earth Objects (NEOs) before they can cause us any damage. I don't know if Graham knows about it, but if he does, he has no need to continue expressing such an attitude, as the possibility of a collision with such an object is taken very seriously.


> I do not have the time, energy or the equipment to
> stargaze since my work schedule is daytime work.
> What Graham insisted is that more watching of the
> sky is needed and a more AWARENESS of our
> precarious predicament in this time forward.
>
> If you have not done so, go read his book (now
> twenty years old, yet immediately relevant).

No, it's way out of date. Later Mars missions, with far superior cameras, have shown that the centerpiece of that book, Cydonia, is not the remains of a city formerly populated by aliens and destroyed 10,000 years ago, but a barren plain full of eroded mesas, billions of years old. The 2007 image of the 'face' from the HiRise camera on the MRO is the best to date. Compared with the original 1976 Viking photo, the detail should put to rest the idea that this was ever a face. Unfortunately, if an object approaches in a direction that shields it from our view until the last moment, there's really not much we can do about it, Spaceguard or not.